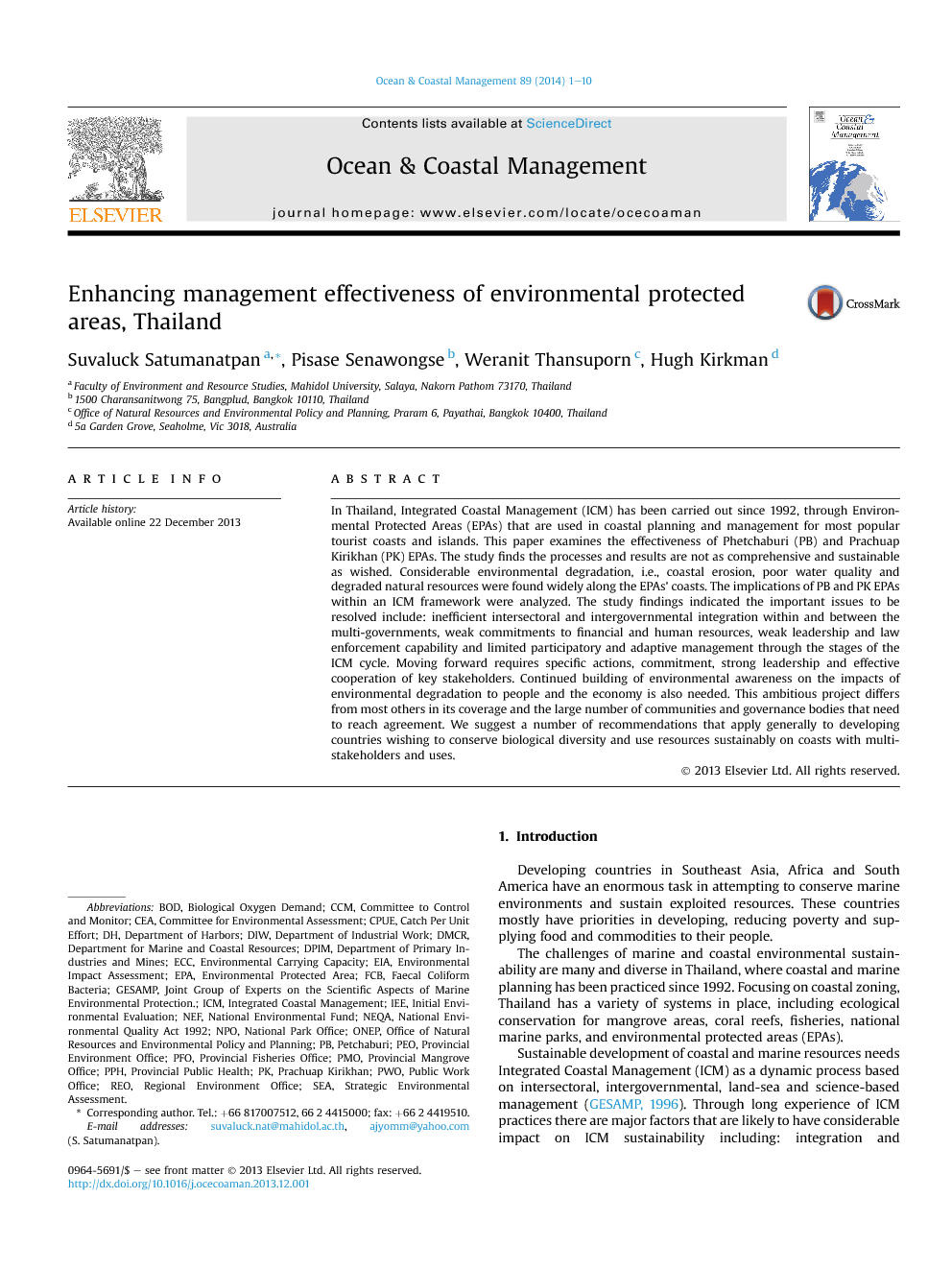 In Thailand, Integrated Coastal Management (ICM) has been carried out since 1992, through Environmental Protected Areas (EPAs) that are used in coastal planning and management for most popular tourist coasts and islands. This paper examines the effectiveness of Phetchaburi (PB) and Prachuap Kirikhan (PK) EPAs. The study finds the processes and results are not as comprehensive and sustainable as wished. Considerable environmental degradation, i.e., coastal erosion, poor water quality and degraded natural resources were found widely along the EPAs' coasts. The implications of PB and PK EPAs within an ICM framework were analyzed. The study findings indicated the important issues to be resolved include: inefficient intersectoral and intergovernmental integration within and between the multi-governments, weak commitments to financial and human resources, weak leadership and law enforcement capability and limited participatory and adaptive management through the stages of the ICM cycle. Moving forward requires specific actions, commitment, strong leadership and effective cooperation of key stakeholders. Continued building of environmental awareness on the impacts of environmental degradation to people and the economy is also needed. This ambitious project differs from most others in its coverage and the large number of communities and governance bodies that need to reach agreement. We suggest a number of recommendations that apply generally to developing countries wishing to conserve biological diversity and use resources sustainably on coasts with multi-stakeholders and uses.

Developing countries in Southeast Asia, Africa and South America have an enormous task in attempting to conserve marine environments and sustain exploited resources. These countries mostly have priorities in developing, reducing poverty and supplying food and commodities to their people. The challenges of marine and coastal environmental sustainability are many and diverse in Thailand, where coastal and marine planning has been practiced since 1992. Focusing on coastal zoning, Thailand has a variety of systems in place, including ecological conservation for mangrove areas, coral reefs, fisheries, national marine parks, and environmental protected areas (EPAs). Sustainable development of coastal and marine resources needs Integrated Coastal Management (ICM) as a dynamic process based on intersectoral, intergovernmental, land-sea and science-based management (GESAMP, 1996). Through long experience of ICM practices there are major factors that are likely to have considerable impact on ICM sustainability including: integration and coordination efforts; participative management; relevant policies, legislation and institutional arrangements; long-term commitment and continuing monitoring and evaluation and adaptive processes (Olsen and Christie, 2000, Olsen, 2003, Christie et al., 2005, White et al., 2005a, White et al., 2005b, White et al., 2006, Pollnac and Pomeroy, 2005, Eisma et al., 2005 and Sekhar, 2005) The process of ICM sets out to avoid fragmented, single-sector management so that all activities function to collectively achieve agreed goals. Coastal zones are a contested space, characterized by diverse definitions, values, uses, biophysical conditions and impacts (Cicin-Sain and Knecht, 1998). The ICM concept was used in developing the EPAs for most tourist coasts and islands in Thailand. Coastal areas of concern were declared as restricted zones in 1972. In 1996, prohibiting trawling and push netting using motorized boats closer than 3 km from the shore and establishing pollution control areas were initiated. This did nothing to reverse environment problems. It was found necessary to declare such areas as EPAs, to support measures for other legislation to better conserve natural resources and the environment. Phetchaburi (PB) and Prachuap Kirikhan (PK) were approved as EPAs by the Cabinet in 1996 and, through a long process, were enacted by Parliament in July 2004. Early planning did not guarantee continuous financial support. Many ICM projects in other countries are funded by external funding sources such as: World Bank; Canadian International Development; US Agency for International Development; WWF-US (Pollnac and Pomeroy, 2005). In the EPAs of PB and PK the only funding is coming from the provincial governments and the Office of Natural Resources and Environmental Policy and Planning (ONEP) and there is no guarantee that it will continue. Before PB and PK were declared EPAs, consultation took place during 1997–1999 led by ONEP, through provincial meetings containing mainly local government stakeholders. At that time, these stakeholders agreed to declare PB and PK as EPAs. Although the EPA approach at “step zero” (Chuenpagdee and Jentoft, 2007), for PB and PK provinces, was initiated by the government (ONEP), there was only partial engagement of the relevant stakeholders and a shortage of support and funding commitment. The Provincial Environment Office (PEO) was assigned to coordinate the work within and between multi-governance levels. The EPAs of PB and PK were developed to avoid conflict and a proliferation of plans and regulations. These constraints were also reported in other EPAs (coasts and islands) in the Gulf of Thailand and the Andaman Sea (personnel observations) and in other countries (Gilman, 2002 and Sekhar, 2005). Development of an appropriate institutional framework for the coordination of different sectors (Vallejo, 1993, Henocque and Denis, 2001 and Chua, 2006) was needed. First was the challenge of integrating within and between the multi-governance scales of PB and PK. Previously a sector-by-sector approach with large institutions dealing with separate activities (mangrove-salt farm–agriculture interactions, coastal constructions by the local and central governments, conflicts between coastal development projects and local government authorities, uncontrolled pollution by sub-districts, rehabilitation of mangroves and treatment and disposal of effluent) was found to be inefficient. Based on ICM practices, another obstacle is seen in the country's legislative framework and regulatory enforcement. Laws used in the EPAs: the Forest Act 1941, the Fishery Act 1947, the National Parks Act 1961, the City and Town Planning Act 1975, the Factory Act 1992, the Public Health Act 1992, the Wildlife Conservation and Protection Act 1992, the NEQA 1992 Act, the Building Control Act 1989 and the Decentralization for Local Administrative Act 1999, provide a fairly extensive legal framework for environmental protection. Despite these laws, there is a total absence of an integrated and coherent program and policy for integrated law enforcement in Thailand for a variety of reasons including inadequate staff and necessary facilities. This impediment was also reported for coastal management in the Philippines (Eisma et al., 2005 and White et al., 2005a) and in Vietnam (Sekhar, 2005). From 2002 to now, Thailand (the DMCR with assistance from the Asian Development Bank and the World Conservation Union) has developed a draft Marine and Coastal Resources Management Act. This Act is designed to provide an integrated approach to coastal resources management through an area-function participation approach, identifying the rights of communities to manage their own coastal resources through a local organization or a co-management relationship with the local government. Unfortunately, this law has not yet been enacted by Parliament. This study is a first attempt to assess the management effectiveness of PB and PK EPAs, using the following objectives: • control and reduce activities that cause coastal erosion and loss; • control and reduce activities that cause pollution along the coast; • conserve natural resources and scenery; and • improve environmental management. A simple model detailed in GESAMP (1996) was widely adapted to coastal municipalities in the Philippines (White et al., 2005a) and Thailand (Satumanatpan, 2012). The model testing for PB and PK EPAs is at a very early stage of the process recognized by GESAMP (1996). It suggests that five consecutive stages (issues identification and assessment, program preparation, implementation, formal adoption and funding, and evaluation) form an ongoing, iterative process. The model may go through a number of cycles before the program is sufficiently refined to produce effective results. Our attempts at implementing ICM by developing EPAs may be useful for other developing countries with similar problems.

Much can be learned from this attempt at integrating people's needs, sustainable resource use and environmental conservation. Many other developing countries could use the recommendations described here to overcome the pitfalls of ICM or EPA, as it is called in Thailand. Although this study found the management effectiveness of EPAs was only partially met, our concern is how the results could be used to further adaptively improve the management process for successful EPA management in the future. The ICM approach is strongly recommended to facilitate effective EPA management to obtain sustainability and environmental conservation. A suite of tools employed in ICM, i.e. environmental protected areas, land-use control, zoning and permit systems and partial stakeholder participation, were applied in the PB and PK EPAs but much improvement is required. More importantly, before the EPAs were initiated some parts of the ICM process should have been ensured, i.e. the PEO should have enough resources and funding for its efficient consultative committees, viz., the CCM and the CEA. There should have been some ability to enforce laws and regulations at all levels of government. All stakeholders should have been involved and supportive of EPA activities and continuous funding for administration and activities should have been secured. Similar to other popular tourist places, PB and PK Provinces have a high potential for urban, industrial and tourism development, incorporating environmental issues into their socio-economic development plans is essential. Balancing between environment and development is a most difficult activity that needs to be planned sustainably. There is no generic model available to determine how much economic development should be allowed before being detrimental to natural ecosystems. The challenge is to find the appropriate balance and translating it into policy, planning and management measures. To cope with the concept of sustainable use planning for PB and PK EPAs, an Environmental Carrying Capacity (ECC) approach is strongly recommended. Strategic Environmental Assessment (SEA) for the whole area should also be explored. Actually, the ECC approach has been accomplished for some time, mainly in tourism planning, for some Thai marine national parks, while SEA was initiated recently, focusing on a few very large projects that may cause an adverse impact to watershed areas. ICM was an obvious framework on which to base sound management. Of particular consideration were: close integration within and between governances, long-term commitment of resources, an adequate legislative framework and the capacity to enforce the law. Participatory management must be linked through the ICM cycle to regular monitoring, evaluation and reporting. To resolve the lack of funding, the National Environmental Fund mechanism (under the responsibility of ONEP) is being considered. Through this mechanism the PEO can request special funding from the NEF to support appropriate EPA activities. To achieve this ideal management strategy it is necessary to have a strong leader whose sole aim is to solve problems from inception to outcome. This “problem specific manager” gains input from stakeholders and sells the plan to the broader community always implementing conservation of coastal resources and their sustainable use ( Kirkman and Kirkman, 2002). Practical activities were developed through an understanding of the problems facing the coastal areas of PB and PK. Because more effort was not put into strategic research on these problems and developing stakeholders' understanding of the consequences of not acting against the problems, the results from this first evaluation of EPAs are not as wished. The way forward is to move onto the second generation of the GESAMP model (GESAMP, 1996) and, through an iterative process to produce effective results.