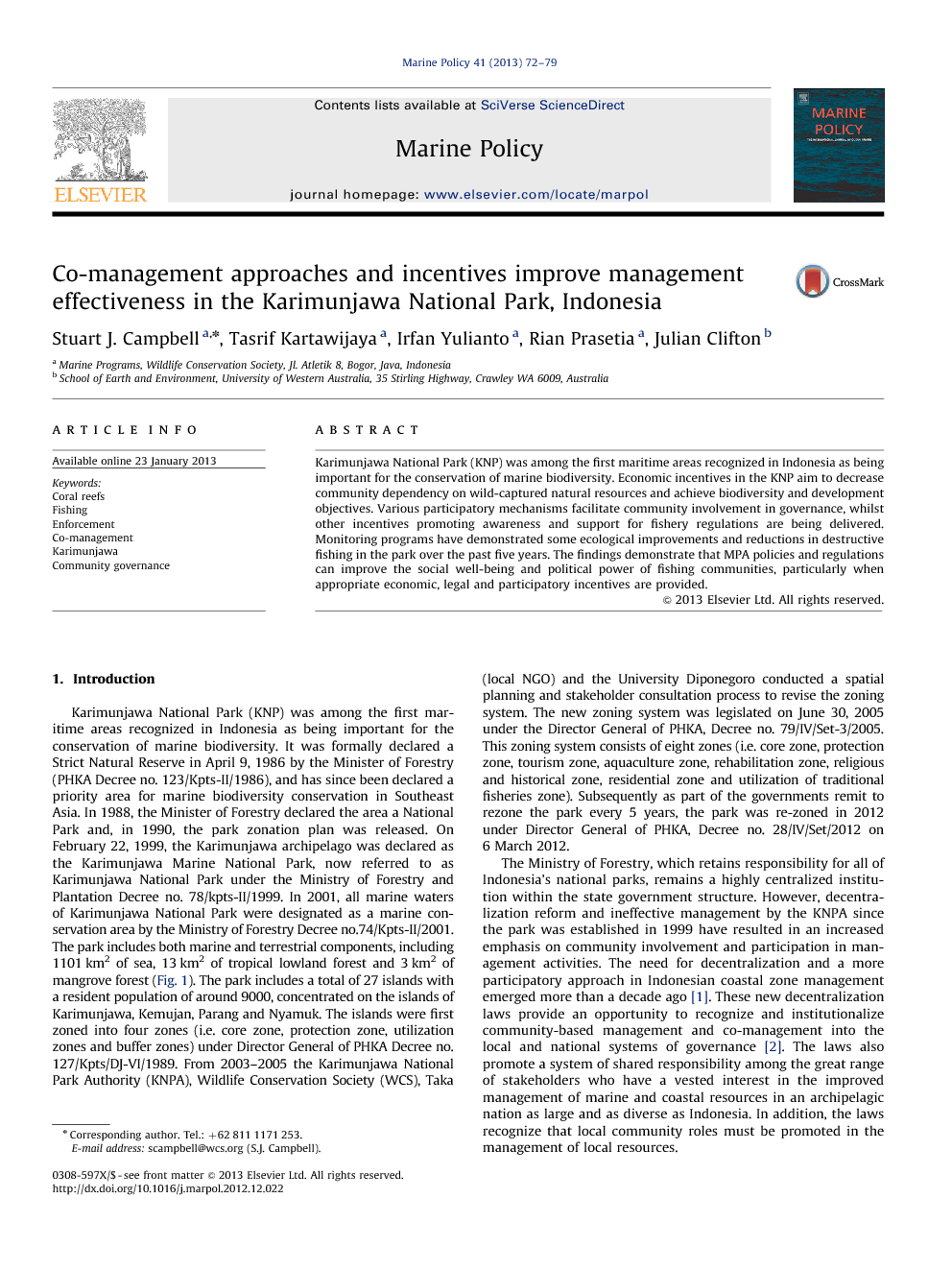 Karimunjawa National Park (KNP) was among the first maritime areas recognized in Indonesia as being important for the conservation of marine biodiversity. Economic incentives in the KNP aim to decrease community dependency on wild-captured natural resources and achieve biodiversity and development objectives. Various participatory mechanisms facilitate community involvement in governance, whilst other incentives promoting awareness and support for fishery regulations are being delivered. Monitoring programs have demonstrated some ecological improvements and reductions in destructive fishing in the park over the past five years. The findings demonstrate that MPA policies and regulations can improve the social well-being and political power of fishing communities, particularly when appropriate economic, legal and participatory incentives are provided.

Karimunjawa National Park (KNP) was among the first maritime areas recognized in Indonesia as being important for the conservation of marine biodiversity. It was formally declared a Strict Natural Reserve in April 9, 1986 by the Minister of Forestry (PHKA Decree no. 123/Kpts-II/1986), and has since been declared a priority area for marine biodiversity conservation in Southeast Asia. In 1988, the Minister of Forestry declared the area a National Park and, in 1990, the park zonation plan was released. On February 22, 1999, the Karimunjawa archipelago was declared as the Karimunjawa Marine National Park, now referred to as Karimunjawa National Park under the Ministry of Forestry and Plantation Decree no. 78/kpts-II/1999. In 2001, all marine waters of Karimunjawa National Park were designated as a marine conservation area by the Ministry of Forestry Decree no.74/Kpts-II/2001. The park includes both marine and terrestrial components, including 1101 km2 of sea, 13 km2 of tropical lowland forest and 3 km2 of mangrove forest (Fig. 1). The park includes a total of 27 islands with a resident population of around 9000, concentrated on the islands of Karimunjawa, Kemujan, Parang and Nyamuk. The islands were first zoned into four zones (i.e. core zone, protection zone, utilization zones and buffer zones) under Director General of PHKA Decree no. 127/Kpts/DJ-VI/1989. From 2003–2005 the Karimunjawa National Park Authority (KNPA), Wildlife Conservation Society (WCS), Taka (local NGO) and the University Diponegoro conducted a spatial planning and stakeholder consultation process to revise the zoning system. The new zoning system was legislated on June 30, 2005 under the Director General of PHKA, Decree no. 79/IV/Set-3/2005. This zoning system consists of eight zones (i.e. core zone, protection zone, tourism zone, aquaculture zone, rehabilitation zone, religious and historical zone, residential zone and utilization of traditional fisheries zone). Subsequently as part of the governments remit to rezone the park every 5 years, the park was re-zoned in 2012 under Director General of PHKA, Decree no. 28/IV/Set/2012 on 6 March 2012. Full-size image (69 K) Fig. 1. Location map and 2012 zoning plan for the Karimunjawa National Park. Figure options The Ministry of Forestry, which retains responsibility for all of Indonesia's national parks, remains a highly centralized institution within the state government structure. However, decentralization reform and ineffective management by the KNPA since the park was established in 1999 have resulted in an increased emphasis on community involvement and participation in management activities. The need for decentralization and a more participatory approach in Indonesian coastal zone management emerged more than a decade ago [1]. These new decentralization laws provide an opportunity to recognize and institutionalize community-based management and co-management into the local and national systems of governance [2]. The laws also promote a system of shared responsibility among the great range of stakeholders who have a vested interest in the improved management of marine and coastal resources in an archipelagic nation as large and as diverse as Indonesia. In addition, the laws recognize that local community roles must be promoted in the management of local resources. Community involvement and participation are widely acknowledged in the literature as providing opportunities for improving natural resource management [3], [4] and [5]. From 2003 to 2005, the KNPA conducted a spatial planning process that resulted in changes in the zones and regulations inside the park. The planning process involved consultation with a wide range of stakeholder groups and sought inputs from communities into the design and adoption of rules that impact marine resource use. Since 2005, communities have been more involved in park management including surveillance, monitoring and involvement in implementing management strategies to help reduce destructive fishing. A positive outcome of improved community participation has been the stabilization of reef fish biomass in some areas since new zoning regulations have been in place [6].

A key finding of this paper is that economic support from government, community and non-governmental sectors is a crucial factor enabling the transition of livelihoods to sustainable fishing practices, reducing destructive fishing and achieving biodiversity protection [28]. The improved governance in KNP appears to meet, in part at least, many of the governance design principles recognized as being important for successful local management [32]. For example, resource dependent communities in the KNP recognized the social and economic implications of new management revisions being developed in 2003 and accordingly self-organized and contributed through participatory planning processes to protect their diverse interests (e.g., income, food security, sense of place) and directly influenced the final set of regulations legislated in 2005. The resulting promotion of community participation in management processes has raised awareness of graduated sanctions, clearly defined geographic boundaries and improved rights to participate in devising rules and regulations of fishing restrictions that have minimized conflict among coastal communities. KNP management over the five year period from 2005 to 2010 has also improved community support for some controls on fishing, promoted the recovery of coral habitats through restrictions on destructive fishing practices and improved community involvement in MPA management. However, fish stocks in the KNP have not increased due to non-compliance with fishery closures [6] and [9] as external factors continue to drive infringements in the KNP. These include market pressure and demand for live reef fish which require increased enforcement of laws at both the national and regional levels and integration of community approaches in law enforcement in the context of broader socio-economic priorities and harm reduction [45]. Increased involvement of village institutions in community decision making related to park management and enforcement will help reduce conflicts among fishers and enable legislation of community supported restrictions and sanctions that protect fishery resources from unsustainable and destructive practices. A highly diversified approach is required to provide incentives for local communities to comply with fishing regulations in the KNP to reverse the depletion in coral reef fisheries. The establishment of village institutions and forums for community decision-making and leadership has provided incentives for communities to address conflicts between biodiversity conservation and local development needs. Through improved knowledge and participation in planning processes and management, and economic support from government and NGOs for livelihood programs such as grouper mariculture, seaweed culture, tourism ventures and micro-credit financing, the primary aim is to reduce exploitative fishing activities and decrease community dependency on wild-captured natural resources. The provision of capacity building and infrastructure is often conditional on recipients' compliance with fisheries regulations, including the prohibition of destructive fishing practices, that can have ecological impacts similar to prohibiting all extractive uses [47] and [48]. The governance approaches described in this study represent ‘emergent’ or hybrid forms of marine area protection in the local context [44] that are respected and locally enforced and may, if enforced, achieve high fishery compliance rates and food security [49], [50] and [51]. The second re-zoning of the KNP was finalized in 2012 as part of the KNPA's adaptive management mandate. To achieve its primary aims of biodiversity protection and social improvement, sustained investment in resources and expertise is needed to deliver incentives that maintain and build sustainable industries, allow traditional subsistence fisheries to flourish, and provide disincentives to outside fishers and destructive fishing [13] and [52].