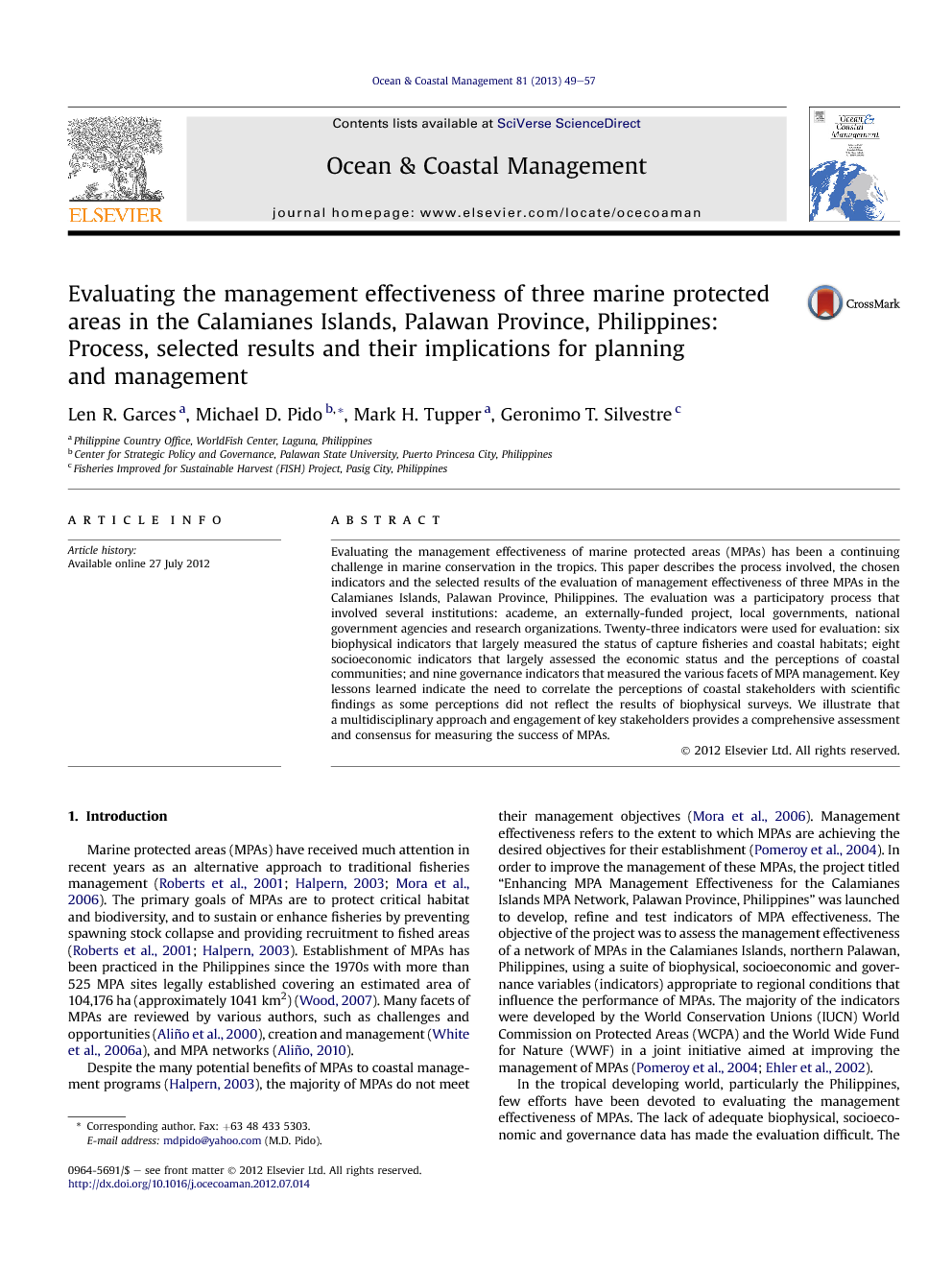 Evaluating the management effectiveness of marine protected areas (MPAs) has been a continuing challenge in marine conservation in the tropics. This paper describes the process involved, the chosen indicators and the selected results of the evaluation of management effectiveness of three MPAs in the Calamianes Islands, Palawan Province, Philippines. The evaluation was a participatory process that involved several institutions: academe, an externally-funded project, local governments, national government agencies and research organizations. Twenty-three indicators were used for evaluation: six biophysical indicators that largely measured the status of capture fisheries and coastal habitats; eight socioeconomic indicators that largely assessed the economic status and the perceptions of coastal communities; and nine governance indicators that measured the various facets of MPA management. Key lessons learned indicate the need to correlate the perceptions of coastal stakeholders with scientific findings as some perceptions did not reflect the results of biophysical surveys. We illustrate that a multidisciplinary approach and engagement of key stakeholders provides a comprehensive assessment and consensus for measuring the success of MPAs.

Marine protected areas (MPAs) have received much attention in recent years as an alternative approach to traditional fisheries management (Roberts et al., 2001; Halpern, 2003; Mora et al., 2006). The primary goals of MPAs are to protect critical habitat and biodiversity, and to sustain or enhance fisheries by preventing spawning stock collapse and providing recruitment to fished areas (Roberts et al., 2001; Halpern, 2003). Establishment of MPAs has been practiced in the Philippines since the 1970s with more than 525 MPA sites legally established covering an estimated area of 104,176 ha (approximately 1041 km2) (Wood, 2007). Many facets of MPAs are reviewed by various authors, such as challenges and opportunities (Aliño et al., 2000), creation and management (White et al., 2006a), and MPA networks (Aliño, 2010). Despite the many potential benefits of MPAs to coastal management programs (Halpern, 2003), the majority of MPAs do not meet their management objectives (Mora et al., 2006). Management effectiveness refers to the extent to which MPAs are achieving the desired objectives for their establishment (Pomeroy et al., 2004). In order to improve the management of these MPAs, the project titled “Enhancing MPA Management Effectiveness for the Calamianes Islands MPA Network, Palawan Province, Philippines” was launched to develop, refine and test indicators of MPA effectiveness. The objective of the project was to assess the management effectiveness of a network of MPAs in the Calamianes Islands, northern Palawan, Philippines, using a suite of biophysical, socioeconomic and governance variables (indicators) appropriate to regional conditions that influence the performance of MPAs. The majority of the indicators were developed by the World Conservation Unions (IUCN) World Commission on Protected Areas (WCPA) and the World Wide Fund for Nature (WWF) in a joint initiative aimed at improving the management of MPAs (Pomeroy et al., 2004; Ehler et al., 2002). In the tropical developing world, particularly the Philippines, few efforts have been devoted to evaluating the management effectiveness of MPAs. The lack of adequate biophysical, socioeconomic and governance data has made the evaluation difficult. The integrative analysis of this information to provide concrete correlations between management actions and desired conservation outcomes of MPAs has not been well documented. Without an effective evaluation system, the support for establishing and maintaining MPAs may be limited as well as tracking progress and providing feedback will be more difficult. Earlier, Samonte-Tan et al. (2009) evaluated the management of the Coron Island Ancestral Domain, a protected area that is also situated in Calamianes, Philippines. Samonte-Tan and Sylvano (2006) provide a profile of Calamianes Islands that was partly used to describe some of the municipalities where the MPAs are located. This paper aims to: (1) describe the participatory evaluation process that involved several institutions in the consensual selection and field testing of 23 biophysical, socioeconomic and governance indicators to assess management effectiveness of three MPAs in the Calamianes Islands; and (2) highlight the key results of the evaluation in terms of their broader implication for MPA planning and management.