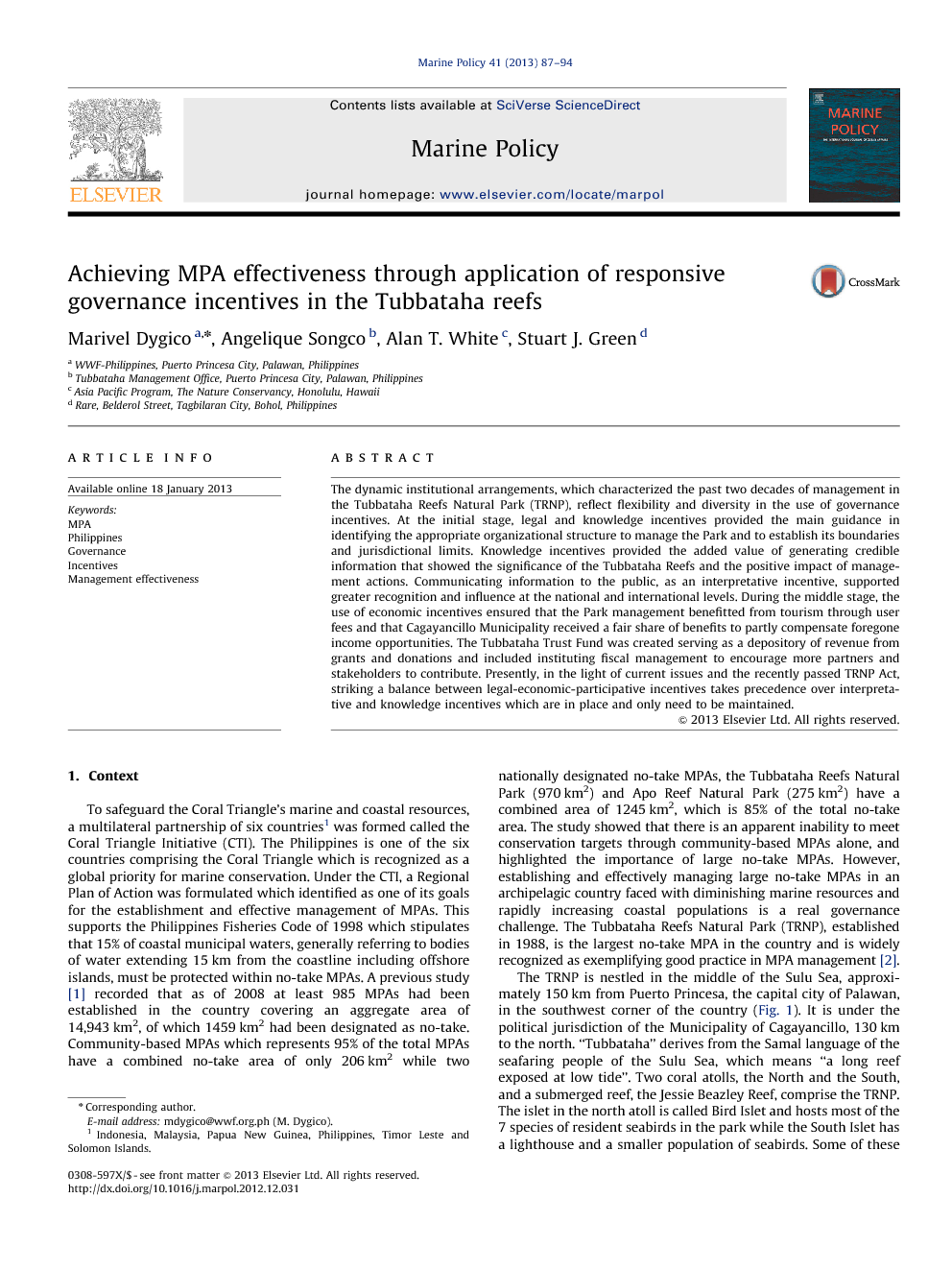 The dynamic institutional arrangements, which characterized the past two decades of management in the Tubbataha Reefs Natural Park (TRNP), reflect flexibility and diversity in the use of governance incentives. At the initial stage, legal and knowledge incentives provided the main guidance in identifying the appropriate organizational structure to manage the Park and to establish its boundaries and jurisdictional limits. Knowledge incentives provided the added value of generating credible information that showed the significance of the Tubbataha Reefs and the positive impact of management actions. Communicating information to the public, as an interpretative incentive, supported greater recognition and influence at the national and international levels. During the middle stage, the use of economic incentives ensured that the Park management benefitted from tourism through user fees and that Cagayancillo Municipality received a fair share of benefits to partly compensate foregone income opportunities. The Tubbataha Trust Fund was created serving as a depository of revenue from grants and donations and included instituting fiscal management to encourage more partners and stakeholders to contribute. Presently, in the light of current issues and the recently passed TRNP Act, striking a balance between legal-economic-participative incentives takes precedence over interpretative and knowledge incentives which are in place and only need to be maintained.

To safeguard the Coral Triangle's marine and coastal resources, a multilateral partnership of six countries1 was formed called the Coral Triangle Initiative (CTI). The Philippines is one of the six countries comprising the Coral Triangle which is recognized as a global priority for marine conservation. Under the CTI, a Regional Plan of Action was formulated which identified as one of its goals for the establishment and effective management of MPAs. This supports the Philippines Fisheries Code of 1998 which stipulates that 15% of coastal municipal waters, generally referring to bodies of water extending 15 km from the coastline including offshore islands, must be protected within no-take MPAs. A previous study [1] recorded that as of 2008 at least 985 MPAs had been established in the country covering an aggregate area of 14,943 km2, of which 1459 km2 had been designated as no-take. Community-based MPAs which represents 95% of the total MPAs have a combined no-take area of only 206 km2 while two nationally designated no-take MPAs, the Tubbataha Reefs Natural Park (970 km2) and Apo Reef Natural Park (275 km2) have a combined area of 1245 km2, which is 85% of the total no-take area. The study showed that there is an apparent inability to meet conservation targets through community-based MPAs alone, and highlighted the importance of large no-take MPAs. However, establishing and effectively managing large no-take MPAs in an archipelagic country faced with diminishing marine resources and rapidly increasing coastal populations is a real governance challenge. The Tubbataha Reefs Natural Park (TRNP), established in 1988, is the largest no-take MPA in the country and is widely recognized as exemplifying good practice in MPA management [2]. The TRNP is nestled in the middle of the Sulu Sea, approximately 150 km from Puerto Princesa, the capital city of Palawan, in the southwest corner of the country (Fig. 1). It is under the political jurisdiction of the Municipality of Cagayancillo, 130 km to the north. “Tubbataha” derives from the Samal language of the seafaring people of the Sulu Sea, which means “a long reef exposed at low tide”. Two coral atolls, the North and the South, and a submerged reef, the Jessie Beazley Reef, comprise the TRNP. The islet in the north atoll is called Bird Islet and hosts most of the 7 species of resident seabirds in the park while the South Islet has a lighthouse and a smaller population of seabirds. Some of these seabird species are classified as priorities for conservation. North Islet is the breeding ground of an endemic subspecies of black noddy, Anous minutus worcestri, and is an important rookery of the critically endangered Christmas Island frigate [3]. Full-size image (38 K) Fig. 1. Location map for the Tubbataha Reefs Natural Park. Figure options The reef systems are composed of continuous reef platforms 200–500 m wide, completely enclosing sandy and coral substrate lagoons with a maximum depth of 40 m. On the inner side of the platform are shallow reef flats and seagrass beds. The TRNP harbors a diversity of marine life equal to or greater than any such reef of its size in the world. It is home to at least 360 species of corals or almost 72% of all coral genera in the world, 600 species of fish, 19 species of rays and sharks, 7 species of seagrass, 66 species of algae, 2 species of marine turtles and 13 species of marine mammals. Large pelagic fish, such as tuna, mackerel, jacks and barracudas, are observed in schools near the reef crests [4].

The combination of governance incentives resulted in effective management of the TRNP. As an MPA deriving its mandate from national and international policies, the management of the Park was able to address local issues and constraints directly affecting conservation results. An MPA by its nature or definition is a governance tool and therefore should be addressed within a governance framework [9]. It is critical that legal incentives are at play in the initial years of the MPA to establish jurisdiction, operational protocols, and clarity in the roles and responsibilities of the people and organizations involved. In applying economic incentives it is important to consider that many conservation projects fail because local stakeholders share a disproportionate burden of the cost arising from a no-take zone compared to benefits accruing to global and national stakeholders and more powerful groups [15]. Tubbataha Reefs demonstrated that competing interests could be reconciled based on the sharing of costs and benefits that stakeholders consider satisfactory and equitable [16]. As a strategy for increasing compliance, law enforcement is critical but has proven inadequate to deter illegal fishers. Preventive enforcement is a more desirable course of action than the mere employment of strongman tactics [17]. This gives credence to the significant roles of knowledge and interpretative incentives whereby the values of the MPA to everyday lives of the people are made known. The TPAMB and the TMO are at this point effectively and efficiently managing TRNP, considering the limited resources with which they operate. Building the capability to sustain this level of effectiveness in the long-term requires a creative application of participative incentives where linkages and collaborations are designed to contribute to better compliance, increased revenues, wider audience, and greater influence.