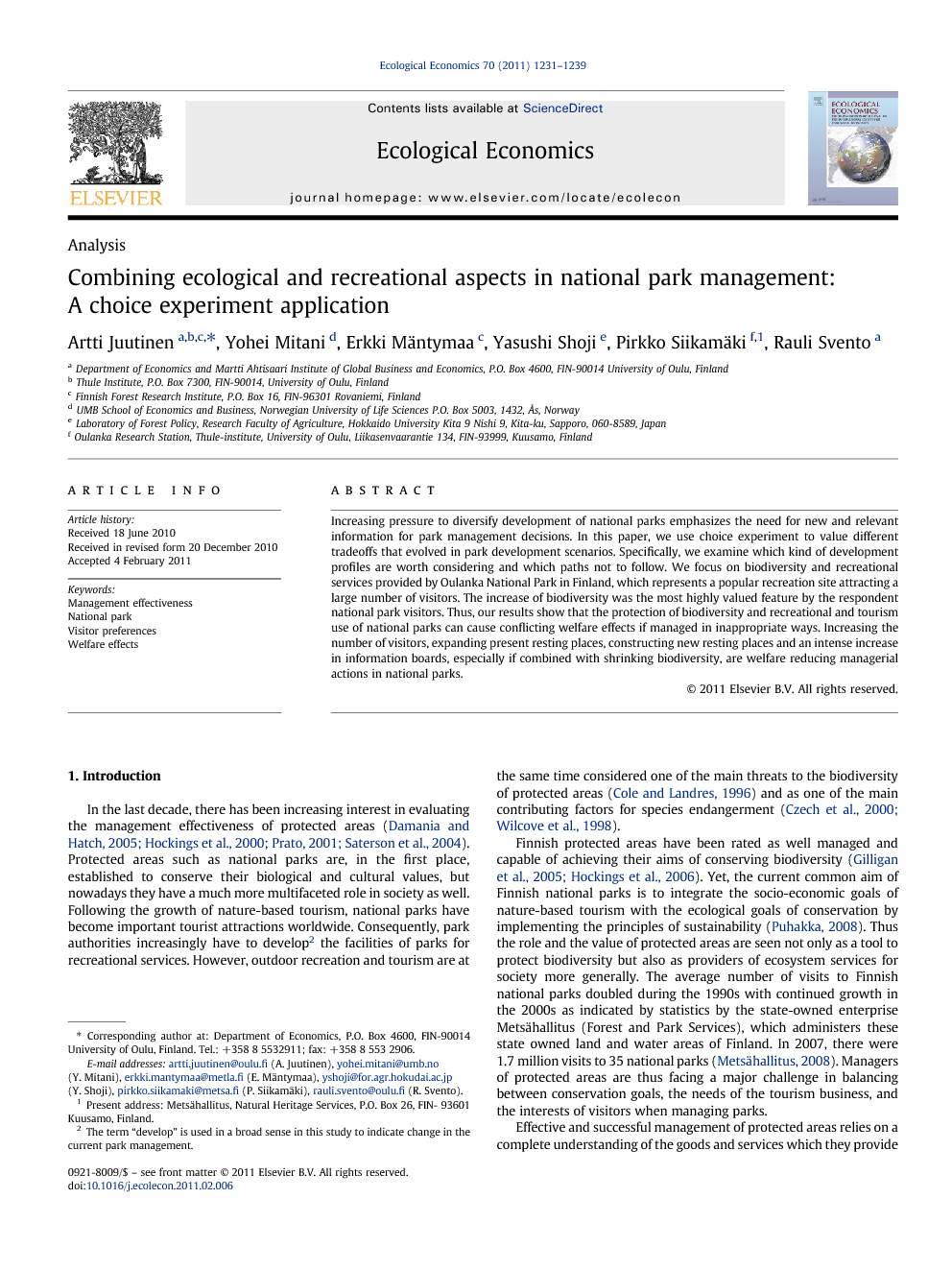 Increasing pressure to diversify development of national parks emphasizes the need for new and relevant information for park management decisions. In this paper, we use choice experiment to value different tradeoffs that evolved in park development scenarios. Specifically, we examine which kind of development profiles are worth considering and which paths not to follow. We focus on biodiversity and recreational services provided by Oulanka National Park in Finland, which represents a popular recreation site attracting a large number of visitors. The increase of biodiversity was the most highly valued feature by the respondent national park visitors. Thus, our results show that the protection of biodiversity and recreational and tourism use of national parks can cause conflicting welfare effects if managed in inappropriate ways. Increasing the number of visitors, expanding present resting places, constructing new resting places and an intense increase in information boards, especially if combined with shrinking biodiversity, are welfare reducing managerial actions in national parks.

In the last decade, there has been increasing interest in evaluating the management effectiveness of protected areas (Damania and Hatch, 2005, Hockings et al., 2000, Prato, 2001 and Saterson et al., 2004). Protected areas such as national parks are, in the first place, established to conserve their biological and cultural values, but nowadays they have a much more multifaceted role in society as well. Following the growth of nature-based tourism, national parks have become important tourist attractions worldwide. Consequently, park authorities increasingly have to develop2 the facilities of parks for recreational services. However, outdoor recreation and tourism are at the same time considered one of the main threats to the biodiversity of protected areas (Cole and Landres, 1996) and as one of the main contributing factors for species endangerment (Czech et al., 2000 and Wilcove et al., 1998). Finnish protected areas have been rated as well managed and capable of achieving their aims of conserving biodiversity (Gilligan et al., 2005 and Hockings et al., 2006). Yet, the current common aim of Finnish national parks is to integrate the socio-economic goals of nature-based tourism with the ecological goals of conservation by implementing the principles of sustainability (Puhakka, 2008). Thus the role and the value of protected areas are seen not only as a tool to protect biodiversity but also as providers of ecosystem services for society more generally. The average number of visits to Finnish national parks doubled during the 1990s with continued growth in the 2000s as indicated by statistics by the state-owned enterprise Metsähallitus (Forest and Park Services), which administers these state owned land and water areas of Finland. In 2007, there were 1.7 million visits to 35 national parks (Metsähallitus, 2008). Managers of protected areas are thus facing a major challenge in balancing between conservation goals, the needs of the tourism business, and the interests of visitors when managing parks. Effective and successful management of protected areas relies on a complete understanding of the goods and services which they provide to the society. To achieve the goal of effective management, decision makers and managers will need to understand the tradeoff between visitors' preferences for the protection of biodiversity and the recreational and tourism uses. Traditionally respondents are asked to rate the importance of a series of attribute approach in visitor surveys providing managers with useful information on visitor's preferences. However, such approach does not necessarily provide managers with information about the relative importance of the attributes being evaluated and the potential tradeoffs inherent in park management decision-making (Lawson and Manning, 2001 and Louviere and Hensher, 1982). When exploring the relative importance of biodiversity protection versus other management goals, the task of identifying tradeoffs among the associated attributes is receiving increasing attention. We conducted a choice experiment (CE) to explore the visitors' preferences among the potentially conflicting management priorities of Oulanka National Park (hereafter Oulanka NP) in Northern Finland. A set of hypothetical park profiles was created, and respondents were asked to choose their most preferred alternatives. The attributes used to create the park profiles were biodiversity, expected number of visitors, resting places, information boards, and entrance fee. These attributes are typical for many national parks. Thus, although we focus on the management of a special target (Oulanka NP), the issue of protected area management also has a wide global importance. Our aim is to reveal how the visitors value the considered characteristics of the park, and based on this information draw guidelines for efficient park management. For that purpose, we estimated visitors' marginal willingness-to-pay (WTP) for different characteristics of Oulanka NP. In addition, we calculated the welfare effects of alternative park management scenarios to illustrate the most and least preferred management options. Finally, we examined how the welfare effects differ between designated visitor groups using information on respondents' socio-economic characteristics and activities they conducted during the visit at the park. Using information on various preference groups the park manager may be able to target actions for specific groups of visitors. Several CE studies to determine visitors' preferences concerning recreation related issues have been carried out (Bullock and Lawson, 2008, Hearne and Salinas, 2002, Lawson and Manning, 2002 and Othman et al., 2004). Our work differs from these studies by including both biodiversity and recreation in the CE. Carlsson et al., 2003, Horne et al., 2005 and Jacobsen et al., 2008, for example, have also examined both biodiversity and recreational services of recreation sites. These studies considered recreational facilities or scenic beauty along with biodiversity. In addition, Jacobsen and Thorsen (2010) examined citizens' preferences for site and environmental functions when selecting forthcoming national parks including both protection efforts and recreational values. We contribute to the literature by extending the description of recreational values to include several management attributes and by providing insights into more concrete park management issues than the previous papers did. From this perspecive our work is close to Christie et al. (2007) who used CE to value changes in visitor welfare for a range of improvements in recreational facilities in forests.