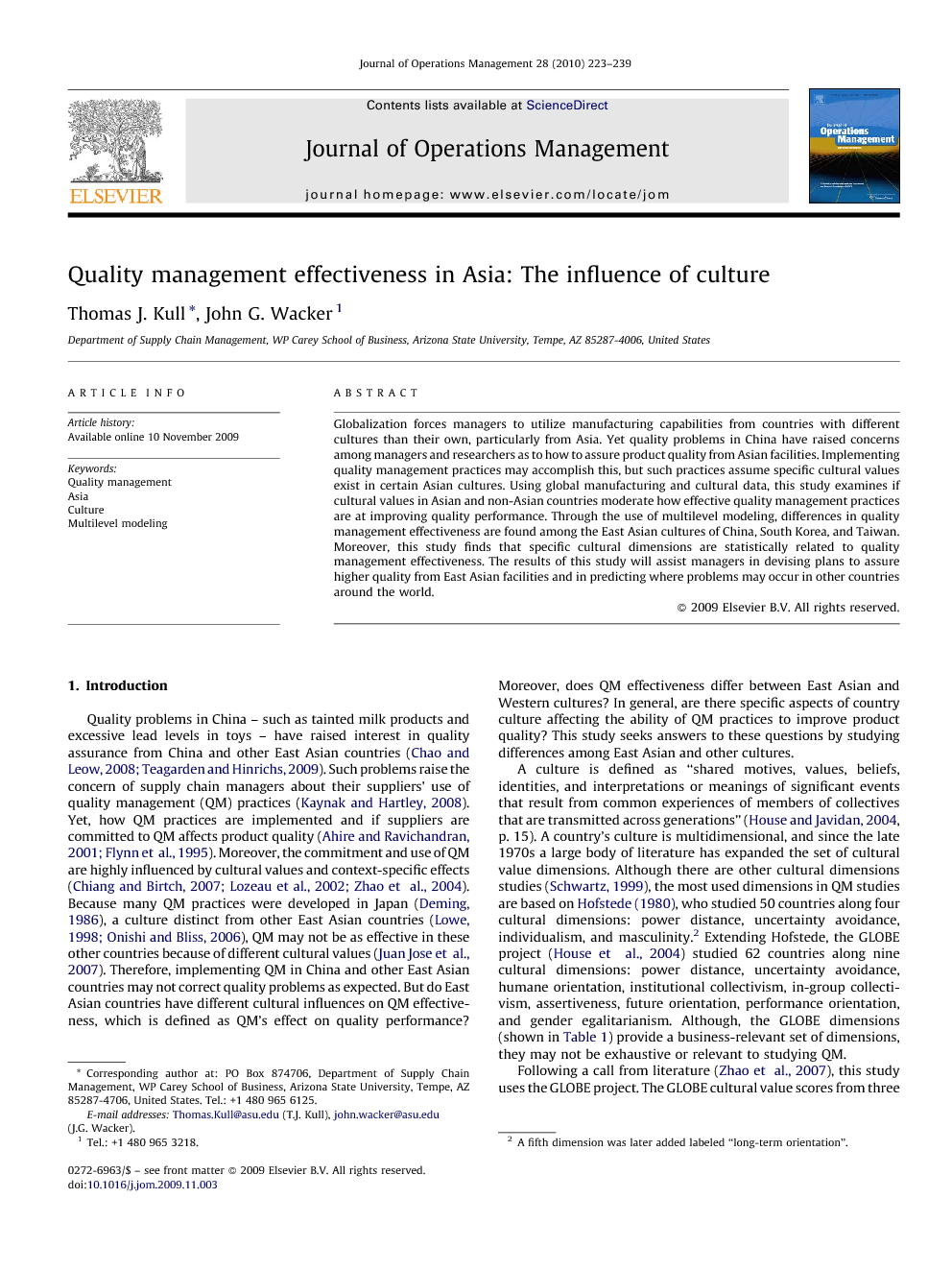 Globalization forces managers to utilize manufacturing capabilities from countries with different cultures than their own, particularly from Asia. Yet quality problems in China have raised concerns among managers and researchers as to how to assure product quality from Asian facilities. Implementing quality management practices may accomplish this, but such practices assume specific cultural values exist in certain Asian cultures. Using global manufacturing and cultural data, this study examines if cultural values in Asian and non-Asian countries moderate how effective quality management practices are at improving quality performance. Through the use of multilevel modeling, differences in quality management effectiveness are found among the East Asian cultures of China, South Korea, and Taiwan. Moreover, this study finds that specific cultural dimensions are statistically related to quality management effectiveness. The results of this study will assist managers in devising plans to assure higher quality from East Asian facilities and in predicting where problems may occur in other countries around the world.

Globalization has forced managers to use manufacturing capabilities in countries with different cultures than their own. Recent quality problems in China have raised the concern among managers and researchers as to how to assure product quality from Asian facilities. Either by management choice or through supply contracts, QM practices are implemented but are not always effective at increasing product quality. QM practices assume certain cultural traits to exist in a workforce, that if lacking will impact effectiveness. Not all Confucian Asian cultures are congruent with QM values, and therefore it was expected that QM effectiveness will vary among these Asian countries. This study found that differences do exist, and that two GLOBE cultural value dimensions explain these differences. First was the GLOBE dimension assertiveness, which had the highest statistical significance. High assertiveness was associated with lower QM effectiveness. This finding explains China's lower QM practice effectiveness; China has the highest assertiveness among the sampled countries, likely a remnant of its past command economy. Uncertainty avoidance was the second important GLOBE dimension, with high levels of this dimension leading to higher QM effectiveness. China, South Korea, and Taiwan have higher uncertainty avoidance than many other cultures. This explains why overall the Confucian Asian counties had higher QM effectiveness than expected. In sum, this study found these country culture values to moderate the effect QM has on quality performance. The results of this study will assist managers in devising plans to assure high quality from Confucian and other Asian facilities, and in predicting where future problems may occur in other countries around the world.