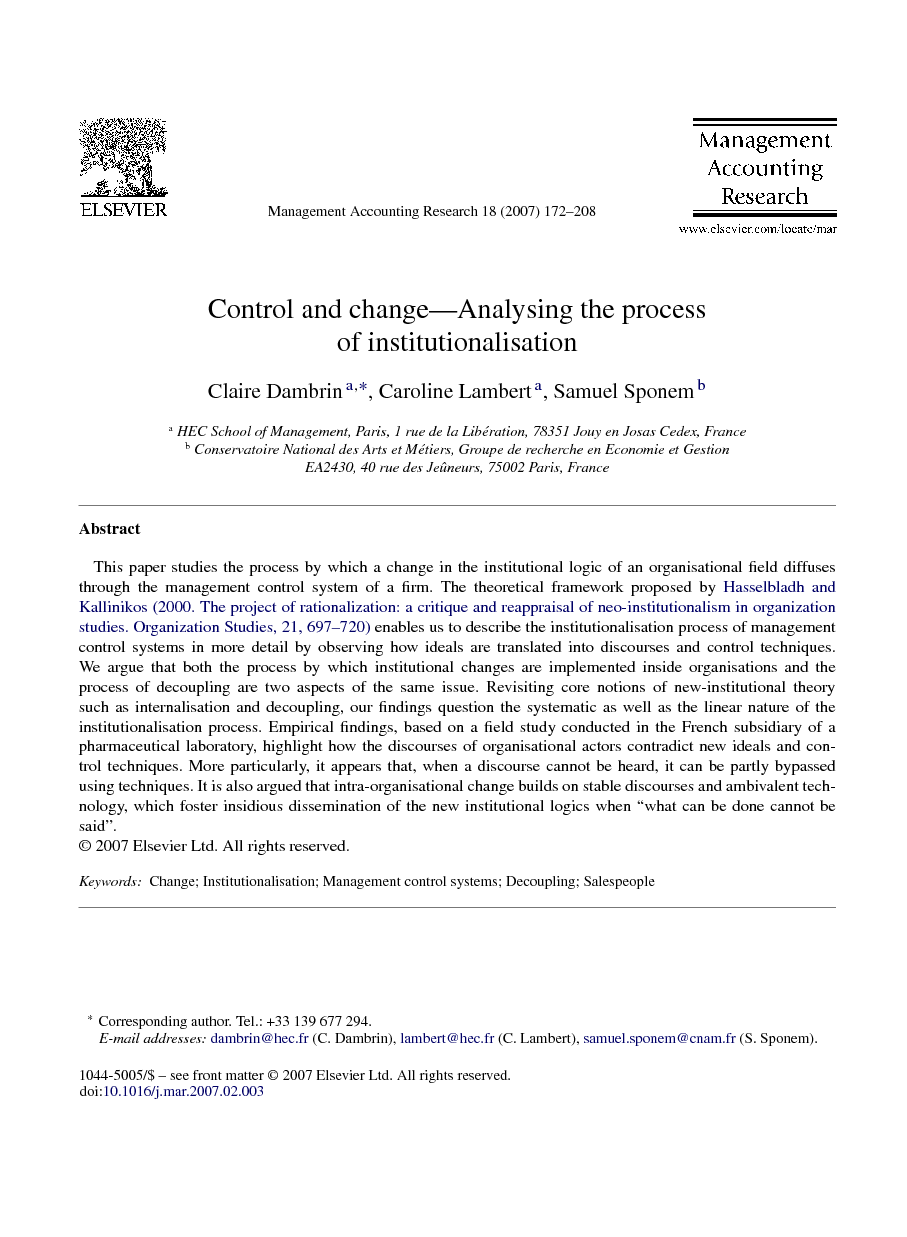 This paper studies the process by which a change in the institutional logic of an organisational field diffuses through the management control system of a firm. The theoretical framework proposed by Hasselbladh and Kallinikos (2000. The project of rationalization: a critique and reappraisal of neo-institutionalism in organization studies. Organization Studies, 21, 697–720) enables us to describe the institutionalisation process of management control systems in more detail by observing how ideals are translated into discourses and control techniques. We argue that both the process by which institutional changes are implemented inside organisations and the process of decoupling are two aspects of the same issue. Revisiting core notions of new-institutional theory such as internalisation and decoupling, our findings question the systematic as well as the linear nature of the institutionalisation process. Empirical findings, based on a field study conducted in the French subsidiary of a pharmaceutical laboratory, highlight how the discourses of organisational actors contradict new ideals and control techniques. More particularly, it appears that, when a discourse cannot be heard, it can be partly bypassed using techniques. It is also argued that intra-organisational change builds on stable discourses and ambivalent technology, which foster insidious dissemination of the new institutional logics when “what can be done cannot be said”.

To conclude, our intention was to analyse one example of intra-organisational change by detailing the institutionalisation process of new MCS within one firm. With this in mind, we have studied the impact of the diffusion of the consumer goods industry logic on the MCS of an organisation in the ethical pharmacy sector. To go beyond criticism levelled at the neo-institutional school of thought, an in-depth analysis of the process of institutionalisation was conducted based on the theoretical framework proposed by Hasselbladh and Kallinikos (2000). The case study presented here is used as additional empirical evidence to generate theory about institutionalisation and decoupling. This paper not only explores how the process of institutionalisation takes place, but also whether it actually takes place and, if so, to what extent. This research has identified signs of change in management control when confronted with a new institutional model. The use of the theoretical framework proposed by Hasselbladh and Kallinikos (2000) offers new insights into understanding the decoupling phenomenon by studying the institutionalisation process through ideals, discourses and techniques. Decoupling is usually considered as the result (maybe unconscious) of an organisational choice not to entirely implement the new technique inside the organisation, as traditional NIS scholars argue (Meyer and Rowan, 1977), or as the result of resistance to change (Siti-Nabiha and Scapens, 2005). Our empirical findings call into question the systematic as well as the linear nature of this process. Ideals, discourses and techniques do not naturally translate from one to another: decoupling appears when there is no coherence between them. Moreover, we argue that ambiguous ideals and ambivalent techniques may facilitate the implementation and the internalisation of a new institutional logic in a given organisation. These findings have several implications for future research. They invite us to analyse change in MCS in relation to the stability of practices and to the ambivalence of control devices. This paper revisits the centrality of discourse underlined in postmodernism and organisational research (Alvesson and Deetz, 1996). Building on a Foucauldian approach to discourses (Foucault, 1975 and Foucault, 1980), we have shown how discourses contribute to producing particular forms of subjectivity according to, in resistance to, or independently of, changing power techniques and evolving ideals. We have confirmed that discourse is central to the institutionalisation process. It is central to change because it not only “ties together ideals and systems of measurement and control” (Hasselbladh and Kallinikos, 2000, p. 706), but also structures the individual's subjectivity, “providing him/her with a particular social identity and way of being in the world” (Alvesson and Deetz, 1996). We have actually highlighted empirically how discourses that conflict with new ideals and techniques enable actors to cope with the evolution of their organisational field and find their way in their organisation. Therefore, change seems able to develop only if some practices (such as the roles envisaged by organisational actors) remain stable. Furthermore, this research concludes that change can build on the ambivalence of ideals and techniques. As stated before, the ambivalence of ideals and techniques enables change to diffuse gradually and disseminate into organisational actors’ daily practices. Internalising norms, the ultimate stage in institutionalisation, is thus facilitated. For these reasons, it seems fruitful to import perspectives offered by research on properties and on the impact of technology to understand the institutionalisation of norms. This research suggests that change can be better analysed when crossed with research about accounting as a socio-institutional practice (Hopwood and Miller, 1994, Townley, 1995 and Jeacle, 2003). In order to further analyse changes in MCS, we propose to explore the socio-institutional processes through which MCS is internalised and actorhood is shaped.