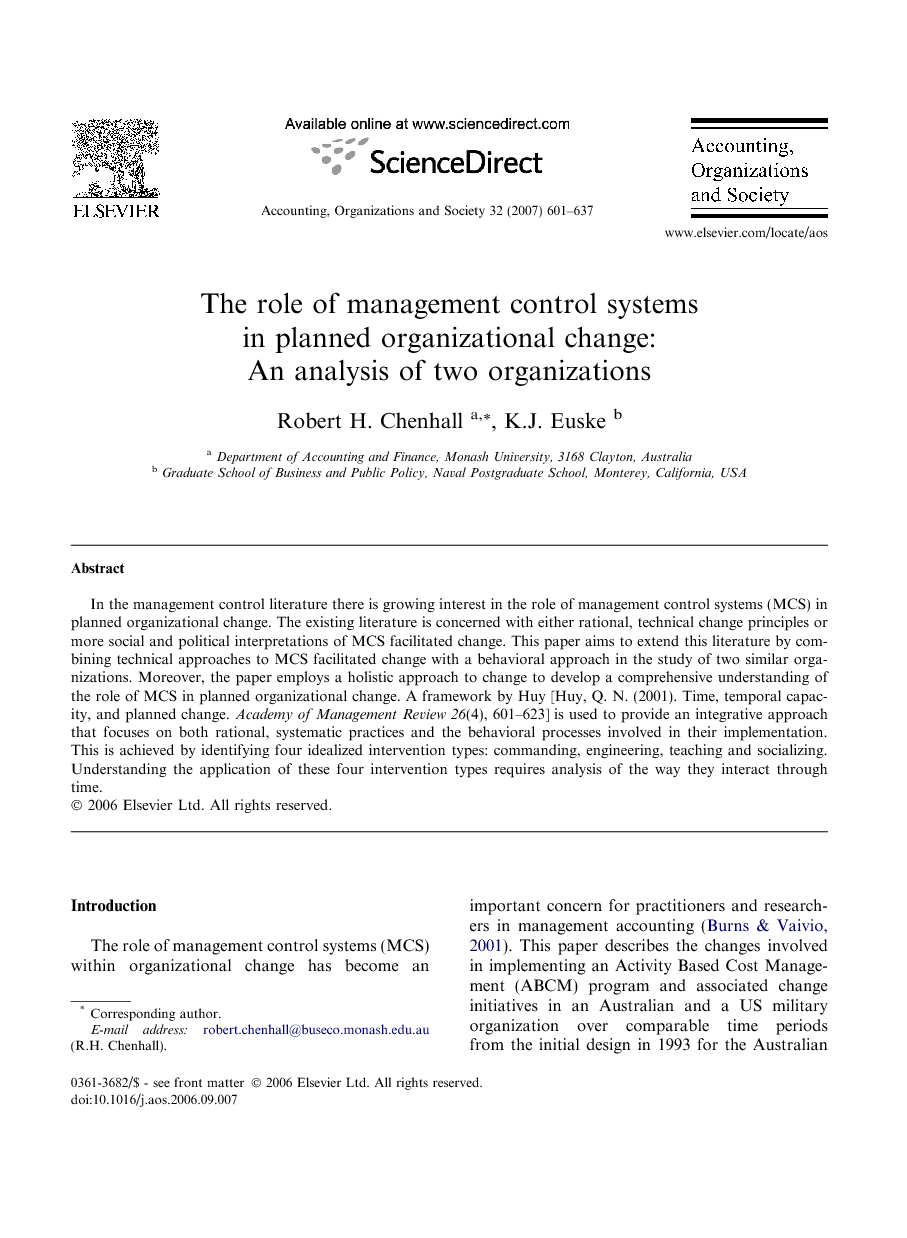 In the management control literature there is growing interest in the role of management control systems (MCS) in planned organizational change. The existing literature is concerned with either rational, technical change principles or more social and political interpretations of MCS facilitated change. This paper aims to extend this literature by combining technical approaches to MCS facilitated change with a behavioral approach in the study of two similar organizations. Moreover, the paper employs a holistic approach to change to develop a comprehensive understanding of the role of MCS in planned organizational change. A framework by Huy [Huy, Q. N. (2001). Time, temporal capacity, and planned change. Academy of Management Review 26(4), 601–623] is used to provide an integrative approach that focuses on both rational, systematic practices and the behavioral processes involved in their implementation. This is achieved by identifying four idealized intervention types: commanding, engineering, teaching and socializing. Understanding the application of these four intervention types requires analysis of the way they interact through time.

The role of management control systems (MCS) within organizational change has become an important concern for practitioners and researchers in management accounting (Burns & Vaivio, 2001). This paper describes the changes involved in implementing an Activity Based Cost Management (ABCM) program and associated change initiatives in an Australian and a US military organization over comparable time periods from the initial design in 1993 for the Australian organization and from 1995 for the US organization until 2004 for both organizations.1 Until the early 1990s, both organizations followed traditional, operationally focused management with few formal management controls to integrate processes; accounting was used primarily for budgeting, on a cash basis. Planning and control by operational units was guided by military doctrine and evaluated on the effectiveness in achieving military targets. Efficiency, although not totally disregarded, was not a major focus. Decisions on resources were taken at senior levels with resource allocation determined by government; operational management focused on execution. The opportunity to have access to two organizations similar in mission, size, and management focus that were attempting to implement the same change to their MCS was, in our view, a relatively unique opportunity. The similarities of the organizations created a research environment in which there was a possibility to begin to understand the impact of alternative implementation decisions made during the change process. Comparative case study data could provide the opportunity to compare and contrast experiences, to identify the impact of potential differences in reactions based on differences in internal structures, individual dispositions and processes. Comparative case study data supports a relatively rich analysis of the empirical phenomena (Yin, 1989). Comparing and contrasting experiences would provide a means to evaluate our expectation, drawn from the extant literature, that there is likely to be no one best way to use MCS to facilitate change. Moreover, the data from the two organizations provided the opportunity to address the extent to which change management problems which appear to be similar when described in terms of the language and processes of an accounting practice, may in fact be different when consideration is given to the different roots, causes and consequence of the change situation. The potential to gain insights from comparing and contrasting the experiences of two similar organizations addressing similar issues concerning MCS facilitated change is illustrated in the studies by Ezzamel, Lilley, and Willmott (2004) and Ezzamel, Willmott, and Worthington (2004). In the former study, MCS were seen as helpful in developing an empowered workforce and relatively harmonious industrial relations, while in contrast, the second study shows how MCS lead to employee hostility and the eventual failure of the MCS. The direct access to decision makers at multiple levels in the organizations while the changes were being implemented also helped to strengthen the study. For instance, in some cases we were able to observe directly the reactions of managers to the demands of the change initiative. Being present during the everyday activities of managers on and off for a period of about two years helped managers become more relaxed with our presence. This assisted in managers providing us with their candid feelings and actions towards the change initiatives. The direct observation complemented archival and interview data. Given the opportunity offered by the two organizations, positioning our study within the MCS and change theory literature was a critical issue to enable a meaningful investigation of the relatively unique research setting. Organizational change theory has long been central to studying how organizations transform themselves through time (Colville et al., 1993, Greiner, 1972, Lewin, 1951 and Mintzberg and Westley, 1992). Planned change has been of particular interest to those who are concerned with creating and managing change in ways that enhance organizational performance (Hofer and Schendel, 1978, Kotter and Heskett, 1992 and Porras and Robertson, 1992). Recently there has been considerable interest in the relationship between the use of MCS and planned organizational change (see Burns & Vaivio, 2001; for an overview of the evolving role of MCS including its potential to drive organizational transformations). Burns and Vaivio (2001, pp. 395–396) note that if MCS are seen to take an active part in the processes that fundamentally transform an organization, how can it be focused to expose inertia and outdated practices that should be uprooted? How is MCS argumentation driving the justification of organizational transformation? This paper aims to contribute to an elaboration of these relationships.

In the previous section we presented the findings regarding the role of MCS in the change process within the two military organizations and analyzed it from the perspective of Huy’s model. A summary of the findings is presented in Table 4. In this section, we continue the discussion of the implementation process using Huy’s model. We use the data from both organizations to draw some conclusions on the ways in which the four intervention modes were combined and sequenced. In doing so, we examine relevant assumptions, both temporal and non-temporal, of the intervention types. Also, we show how Huy’s framework of effective planned change requires consideration of situational factors such as the extent of pressure from the external environment, the extensiveness of the change (organizational or local initiatives), the complexity of the work situation, the level of structural autonomy and personal dispositions to change. These factors evolved through time.In essence, Huy proposes that large-scale change involves the enactment of multiple ideal intervention types: commanding, engineering, teaching and socializing. The effectiveness of applying these ideal types depends largely on which modes are combined, the timing of the interventions, and the pace of change. We found that while each organization aimed to effect change by implementing ABCM, they combined and sequenced the interventions in different ways. Huy (2001, p. 610) stresses that it is the effectiveness of combining and sequencing interventions that provides organizations with a ‘temporal capacity’ to manage the process of change. Temporal capacity provides for an effective integration of the different pacing requirements embedded within the different modes. For example, temporal capacity is evident when the fast pacing of a commanding mode is effectively combined with the engineering mode that is constrained by the time required to understand and diagnose work processes. Both of our research sites provide evidence of the importance of developing effective temporal capacity at various times over the ten years of the study. Perhaps the clearest example of difficulties with developing temporal capacity in the Australian case was the inconsistency in managing the clock time requirements of the commanding intervention with the combination of a slower clock time for the engineering intervention and qualitative time for teaching and socializing interventions. Managers were not given sufficient time to buy into the ABCM initiative. In the US case, considerable flexibility in providing qualitative time was evident by way of the individualized pacing of the development of the local models. Each manager was given the qualitative time necessary to accept the initial change and then request more until he or she was fully committed.