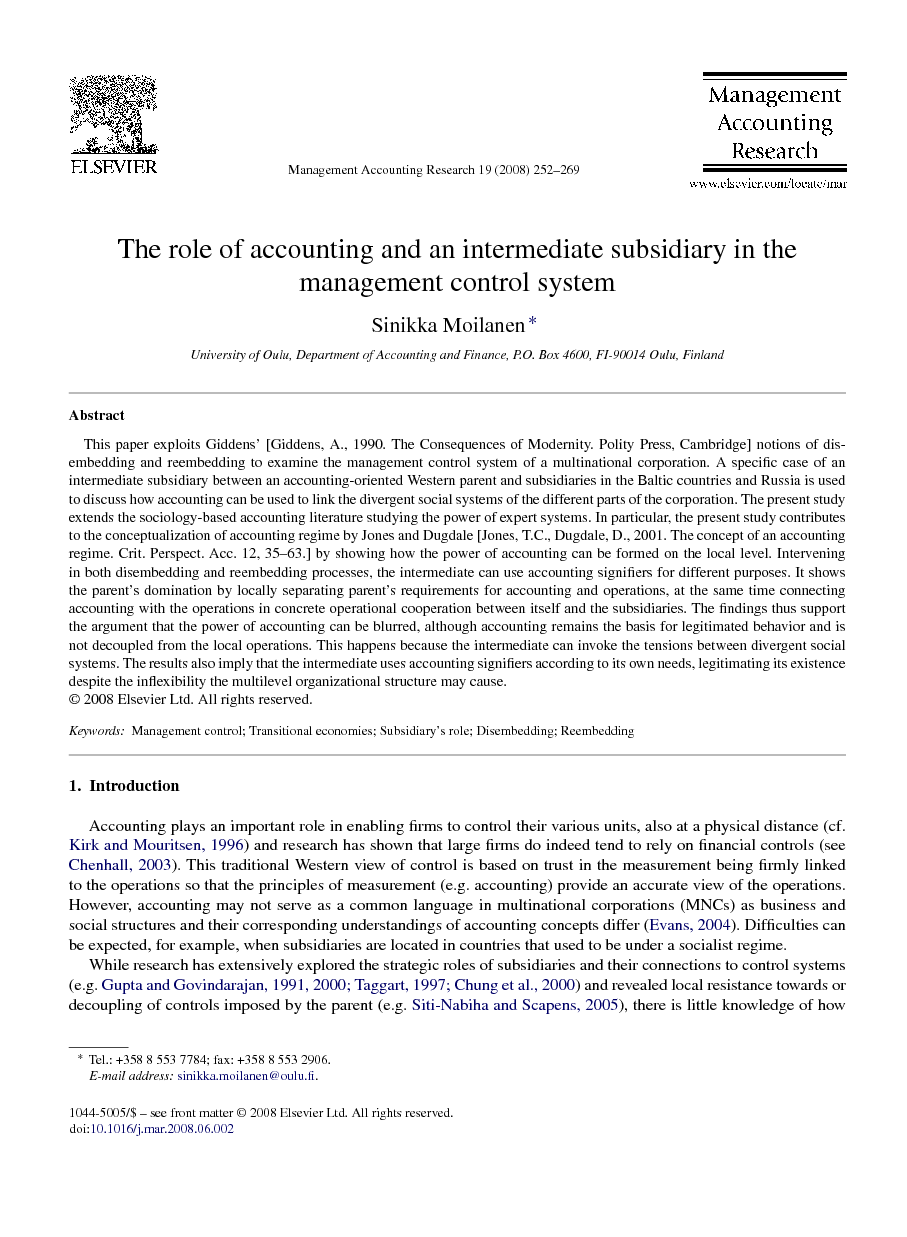 This paper exploits Giddens’ [Giddens, A., 1990. The Consequences of Modernity. Polity Press, Cambridge] notions of disembedding and reembedding to examine the management control system of a multinational corporation. A specific case of an intermediate subsidiary between an accounting-oriented Western parent and subsidiaries in the Baltic countries and Russia is used to discuss how accounting can be used to link the divergent social systems of the different parts of the corporation. The present study extends the sociology-based accounting literature studying the power of expert systems. In particular, the present study contributes to the conceptualization of accounting regime by Jones and Dugdale [Jones, T.C., Dugdale, D., 2001. The concept of an accounting regime. Crit. Perspect. Acc. 12, 35–63.] by showing how the power of accounting can be formed on the local level. Intervening in both disembedding and reembedding processes, the intermediate can use accounting signifiers for different purposes. It shows the parent's domination by locally separating parent's requirements for accounting and operations, at the same time connecting accounting with the operations in concrete operational cooperation between itself and the subsidiaries. The findings thus support the argument that the power of accounting can be blurred, although accounting remains the basis for legitimated behavior and is not decoupled from the local operations. This happens because the intermediate can invoke the tensions between divergent social systems. The results also imply that the intermediate uses accounting signifiers according to its own needs, legitimating its existence despite the inflexibility the multilevel organizational structure may cause.

Accounting plays an important role in enabling firms to control their various units, also at a physical distance (cf. Kirk and Mouritsen, 1996) and research has shown that large firms do indeed tend to rely on financial controls (see Chenhall, 2003). This traditional Western view of control is based on trust in the measurement being firmly linked to the operations so that the principles of measurement (e.g. accounting) provide an accurate view of the operations. However, accounting may not serve as a common language in multinational corporations (MNCs) as business and social structures and their corresponding understandings of accounting concepts differ (Evans, 2004). Difficulties can be expected, for example, when subsidiaries are located in countries that used to be under a socialist regime. While research has extensively explored the strategic roles of subsidiaries and their connections to control systems (e.g. Gupta and Govindarajan, 1991, Gupta and Govindarajan, 2000, Taggart, 1997 and Chung et al., 2000) and revealed local resistance towards or decoupling of controls imposed by the parent (e.g. Siti-Nabiha and Scapens, 2005), there is little knowledge of how different social systems of the business units can be linked in a management control system. The present study aims to address this gap by investigating how the case firm as an intermediate subsidiary uses accounting in a management control system for linking together the different social systems of its Western parent company and subsidiaries in Russia and the Baltic countries. The intermediate compiles and forwards the reports of its subsidiaries to the parent, which explicitly relies on the budgeting process in its control system. Therefore, the intermediate can actively influence the control process. The interpretation of the intermediate's role draws on Giddens’ (1990) terminology of disembedding and reembedding. Highlighting the duality of structures the framework provides a fruitful way of contributing to management control literature by exploring the linkage of the social systems (cf. Whittington, 1992). By focusing on this linkage the present study can contribute back to the sociological works discussing the emergence of the power of an expert system (e.g. Giddens, 1990). The present study more specifically aims to enhance our understanding of Jones and Dugdale's (2001) conceptualization of an accounting regime by illustrating how in linking the social systems the intermediate locally forms the power of accounting by intervening in disembedding and reembedding in the reporting/control process. The linkage between Western accounting and firms in the area of the former Soviet Union may be especially problematic, as the use of accounting in the Soviet Union differed substantially from that of the Western model. Accounting was clearly separated from decision-making and planning, from the actual operations, as it was a way for central government to control and dominate (e.g. Bailey, 1995 and Enthoven et al., 1998). Accounting was not even meaningful in the Western sense, as cash-based “accounting” was based on artificial prices (Bailey, 1995). The accounting data thus had no economic content and in effect, accounting was neutralized. Meanwhile the Soviet type domination generated different ways for surviving in such circumstances, an example of which is the use in Russia of personal, informal connections known as blat ( Ledeneva, 1998, Michailova and Worm, 2003 and Hutchings and Michailova, 2004). Handling issues informally and the neutralization of accounting suggest that accounting was detached from the actual operations. This may be a problem, as in the Western world accounting has recently become even more connected with operations, as new techniques and practices have been generated in order to make accounting helpful in managers’ decision-making (e.g. Granlund and Lukka, 1998 and Scapens, 2005). Therefore, this paper also contributes to the management accounting and control literature on economies in transition (see Southworth, 1994, Firth, 1996, Vámosi, 2000, Haldma and Lääts, 2002 and Szychta, 2002). Pure financial control would hardly be effective in circumstances where accounting has traditionally been neutralized and separated from operations. The rest of the paper is organized as follows. Section 2 presents conceptual and theoretical guidelines, whereas Section 3 covers the research design. The case firm's control and its structural context are introduced and analyzed in Section 4. Section 5 discusses the disembedding and reembedding mechanisms in the control system of the case firm and Section 6 concludes the paper.