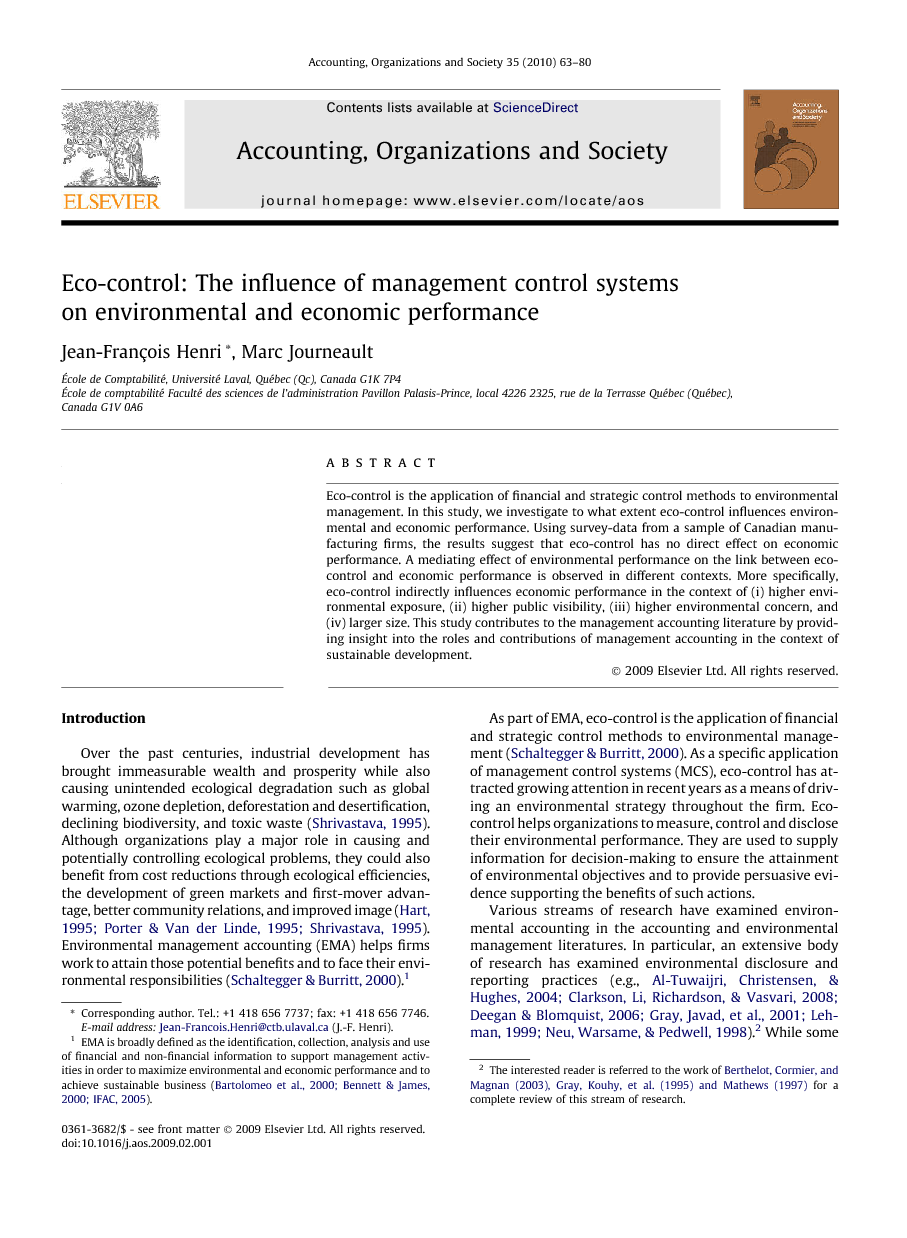 The aim of this study was to examine the influence of the integration of environmental matters within manage- ment control systems on environmental and economic performance. More specifically, it uses a mediation model to investigate the direct effect of eco-control on economic performance, as well as the indirect effect through envi- ronmental performance. Overall, eco-control has no direct effect on economic performance. A mediating effect of environmental performance on the link between eco-con- trol and economic performance is observed in different contexts. More specifically, eco-control has an indirect influence on economic performance in the context of (i) higher environmental exposure, (ii) higher public visibil- ity, (iii) higher environmental concern, and (iv) larger size. A number of theoretical contributions and practical implications can be derived from our results. From a theo- retical standpoint, this paper contributes to the manage- ment accounting and environmental management literatures by providing insight into the roles and contribu- tions of management accounting in a context of sustain- able development. It consolidates the role of accounting in a context of sustainable development as a tool fostering transparency and accountability ( Gray, 1992 ). As sug- gested by Mathews (1997, p. 481) , environmental account- ing, as a field of study, ‘‘must lead to action and change in the relationship between business, the stakeholders which make up society and the environment which we need to support us all”. Furthermore, this study presents a holistic view of environmental performance by integrating not only one aspect of the construct but four aspects, namely process and product improvements, stakeholder relations, regulatory compliance and financial impact, as well as environmental impact and corporate image. Lastly, it con- tributes to the MCS literature by providing evidence that the link between control systems and economic perfor- mance is not necessarily direct. It may occur via other lev-els of performance or specific organizational actions or initiatives. Although numerous studies have addressed issues re- lated to environmental disclosure and reporting, little is known about other dimensions of environmental account- ing, especially eco-control. As observed by Burritt (2004) , empirical research in environmental management accounting is scarce and is focused more on describing than on analyzing or critically evaluating the effectiveness of tools. Thus, this paper contributes to the current litera- ture by providing empirical data shedding some light on the current practices and application of eco-control in manufacturing firms. Our results also reflect the impor- tance of integrating the environmental dimension into MCS to increase environmental and economic performance. This study also has important implications for manage- ment practices. Considering the economic performance resulting from improvements in environmental perfor- mance, managers should be aware of the importance of integrating environmental matters into the existing man- agement control systems. More specifically, there are many ways to integrate environmental issues into the con- trol systems: (i) developing specific performance indica- tors (e.g., inputs of energy, outputs of solid waste, financial impact, etc.), (ii) frequently using those indicators to monitor compliance, to support decision-making, to motivate continuous improvement and for external report- ing, (iii) fixing specific goals in the budget for the environ- mental expenses, incomes and investment, and (iv) linking environmental goals and indicators to rewards. This study is subject to potential limitations in terms of internal and external validity. First, for any proposed struc- tural model, other structural models tested using the same data may suggest different relationships among latent con- structs and reflect equivalent levels of fit ( MacCallum, Wagner, Uchino, & Farbigar, 1993 ). The possible existence of an equivalent model is problematic and constitutes a limitation of the current results obtained. Second, no clear evidence of causality can be established with survey-data obtained from cross-sectional analyses. Rather the evi- dence must be considered consistent with theoretical arguments and predicted relationships. Third, this study is static, i.e., it does not incorporate the evolution of eco- controls and performance over time. Lastly, using the sur- vey method to collect data creates a potential for bias due to common response.