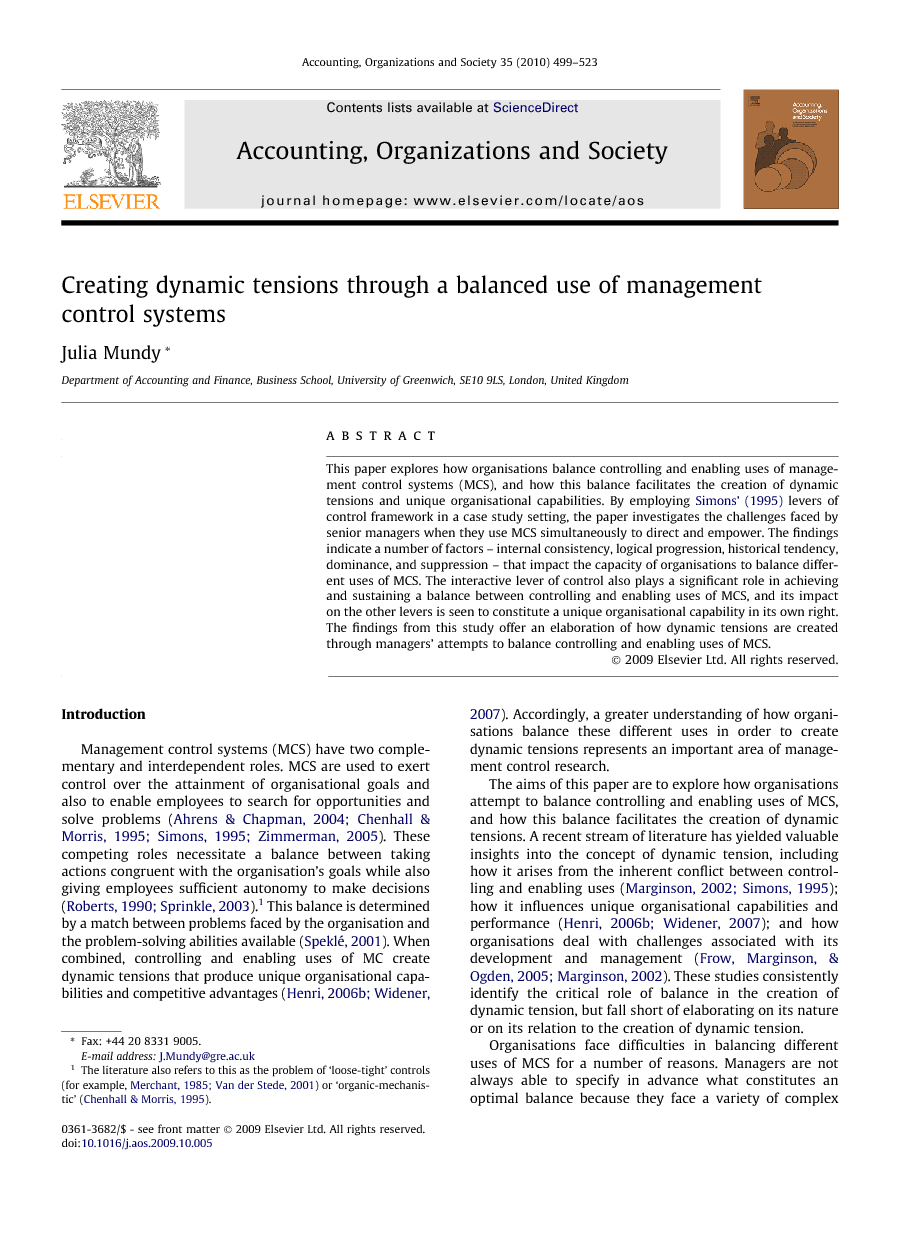 This paper explores how organisations balance controlling and enabling uses of management control systems (MCS), and how this balance facilitates the creation of dynamic tensions and unique organisational capabilities. By employing Simons’ (1995) levers of control framework in a case study setting, the paper investigates the challenges faced by senior managers when they use MCS simultaneously to direct and empower. The findings indicate a number of factors – internal consistency, logical progression, historical tendency, dominance, and suppression – that impact the capacity of organisations to balance different uses of MCS. The interactive lever of control also plays a significant role in achieving and sustaining a balance between controlling and enabling uses of MCS, and its impact on the other levers is seen to constitute a unique organisational capability in its own right. The findings from this study offer an elaboration of how dynamic tensions are created through managers’ attempts to balance controlling and enabling uses of MCS.

Management control systems (MCS) have two complementary and interdependent roles. MCS are used to exert control over the attainment of organisational goals and also to enable employees to search for opportunities and solve problems (Ahrens and Chapman, 2004, Chenhall and Morris, 1995, Simons, 1995 and Zimmerman, 2005). These competing roles necessitate a balance between taking actions congruent with the organisation’s goals while also giving employees sufficient autonomy to make decisions (Roberts, 1990 and Sprinkle, 2003).1 This balance is determined by a match between problems faced by the organisation and the problem-solving abilities available (Speklé, 2001). When combined, controlling and enabling uses of MC create dynamic tensions that produce unique organisational capabilities and competitive advantages (Henri, 2006b and Widener, 2007). Accordingly, a greater understanding of how organisations balance these different uses in order to create dynamic tensions represents an important area of management control research. The aims of this paper are to explore how organisations attempt to balance controlling and enabling uses of MCS, and how this balance facilitates the creation of dynamic tensions. A recent stream of literature has yielded valuable insights into the concept of dynamic tension, including how it arises from the inherent conflict between controlling and enabling uses (Marginson, 2002 and Simons, 1995); how it influences unique organisational capabilities and performance (Henri, 2006b and Widener, 2007); and how organisations deal with challenges associated with its development and management (Frow et al., 2005 and Marginson, 2002). These studies consistently identify the critical role of balance in the creation of dynamic tension, but fall short of elaborating on its nature or on its relation to the creation of dynamic tension. Organisations face difficulties in balancing different uses of MCS for a number of reasons. Managers are not always able to specify in advance what constitutes an optimal balance because they face a variety of complex decisions (Ahrens and Chapman, 2007 and Speklé, 2001). In addition, the capacity of organisations to balance controlling and enabling uses of MCS is dependent on specific individual and organisational attributes. These include trust, autonomy, power relations, and professionalism, elements that are difficult to identify and replicate (Alvesson and Kärreman, 2004, Chenhall and Euske, 2007, Euske and Riccaboni, 1999, Frow et al., 2005, Marginson, 2002 and Sprinkle et al., 2008). Managers also have a natural tendency to use MCS coercively rather than in ways that give employees autonomy in carrying out their activities (Ahrens and Chapman, 2004 and Wouters and Wilderom, 2008). An emphasis on coercive use is problematic because it restricts the potential for novel and innovative behaviours that can lead to improvements in long-term performance (Armstrong, 2002 and Seal, 2001). On the other hand, enabling use is potentially harmful to organisations that operate in stable environments, because their control processes require established and effective ways of operating (Abernethy and Brownell, 1999 and Wouters and Wilderom, 2008). An organisation’s inability to balance different uses of MCS is associated with slower decision-making, wasted resources, instability and, ultimately, lower performance (Bisbe et al., 2006 and Henri, 2006b). Systematic research into the natures of dynamic tension and balance has been hindered by a unidimensional view of the use of control systems commonly taken by traditional approaches. For example, studies informed by agency theory emphasise the use of coercive forms of control in order to minimise the potential for opportunism and moral hazard (Abernethy & Chua, 1996). Equally, studies based on theories of labour processes regard the enabling use of MCS as another way of implementing control over employees via increased transparency of costs (for example, Armstrong, 2002, Ezzamel et al., 2004 and Hopper and Armstrong, 1991). These perspectives explain the competing demands of controlling and enabling use as inevitable but unproductive because they represent wasted effort. A similar emphasis on the controlling use of MCS is adopted by studies that investigate managers’ reliance on accounting performance measures (Hartmann, 2000). Contingency-based studies are equally problematic because they take a static and fragmented approach that underspecifies the interrelations between different roles of MCS (Fisher, 1995 and Selto et al., 1995). Furthermore, these studies regard managers as passive participants with limited choice in how they use MCS to achieve the organisation’s goals, and whose collective behaviour can be optimally designed for any given set of circumstances (Chenhall, 2003). In the same way, studies drawing on resource dependency theories ignore issues relating to power and opportunism, and thus provide limited guidance on how a balance between coercive and enabling uses is influenced by managerial choice and self-interest (Abernethy & Chua, 1996). The current study investigates the concept of balance by drawing on Simons’ (1995) levers of control (LOC) framework. The LOC framework is explicitly concerned with the dual use of MCS to facilitate creativity while simultaneously providing constraints on employees’ behaviour. The concept of balance is a central but largely implicit element in the framework, and its role in the development of dynamic tensions remains underresearched. The findings of the current study are based on qualitative data collected from senior managers in a large financial services organisation. The LOC framework is employed to explore how these managers attempt to balance controlling and enabling uses of MCS in order to generate the dynamic tensions that contribute to the organisation’s capabilities. The paper is organised as follows. The next section presents the conceptual framework on which the study is based. This is followed by a description of the study design and method. The findings are then presented, together with a discussion. Concluding comments are provided in the final section.