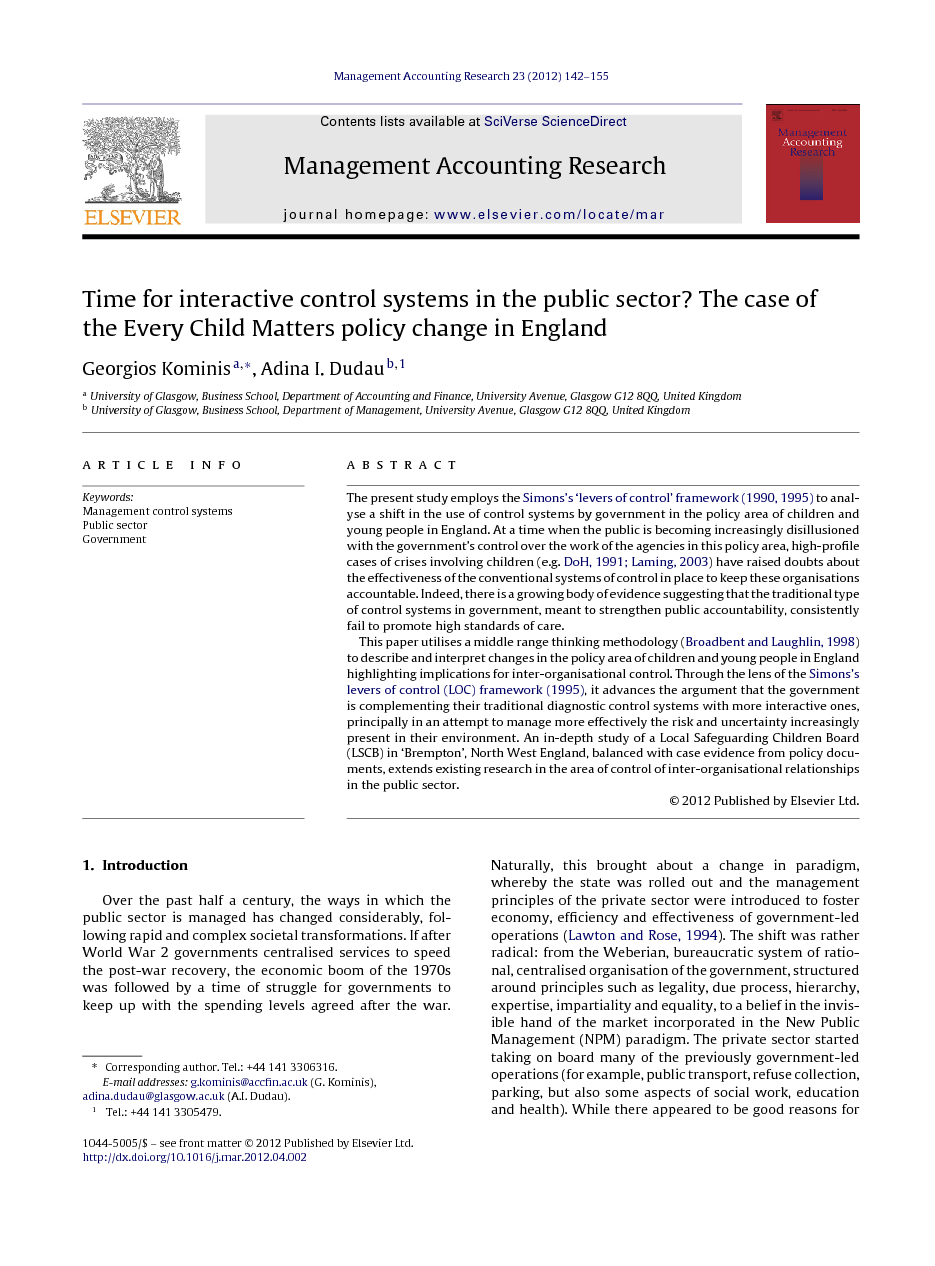 The present study employs the Simons, 1990 and Simons, 1995 to analyse a shift in the use of control systems by government in the policy area of children and young people in England. At a time when the public is becoming increasingly disillusioned with the government's control over the work of the agencies in this policy area, high-profile cases of crises involving children (e.g. Department of Health, 1991 and Laming, 2003) have raised doubts about the effectiveness of the conventional systems of control in place to keep these organisations accountable. Indeed, there is a growing body of evidence suggesting that the traditional type of control systems in government, meant to strengthen public accountability, consistently fail to promote high standards of care. This paper utilises a middle range thinking methodology (Broadbent and Laughlin, 1998) to describe and interpret changes in the policy area of children and young people in England highlighting implications for inter-organisational control. Through the lens of the Simons's levers of control (LOC) framework (1995), it advances the argument that the government is complementing their traditional diagnostic control systems with more interactive ones, principally in an attempt to manage more effectively the risk and uncertainty increasingly present in their environment. An in-depth study of a Local Safeguarding Children Board (LSCB) in ‘Brempton’, North West England, balanced with case evidence from policy documents, extends existing research in the area of control of inter-organisational relationships in the public sector.

Over the past half a century, the ways in which the public sector is managed has changed considerably, following rapid and complex societal transformations. If after World War 2 governments centralised services to speed the post-war recovery, the economic boom of the 1970s was followed by a time of struggle for governments to keep up with the spending levels agreed after the war. Naturally, this brought about a change in paradigm, whereby the state was rolled out and the management principles of the private sector were introduced to foster economy, efficiency and effectiveness of government-led operations (Lawton and Rose, 1994). The shift was rather radical: from the Weberian, bureaucratic system of rational, centralised organisation of the government, structured around principles such as legality, due process, hierarchy, expertise, impartiality and equality, to a belief in the invisible hand of the market incorporated in the New Public Management (NPM) paradigm. The private sector started taking on board many of the previously government-led operations (for example, public transport, refuse collection, parking, but also some aspects of social work, education and health). While there appeared to be good reasons for doing so, the complexity of the mixture between public and private provision of social services, as well as the sheer number of stakeholders in the policy arena, soon became difficult for governments to manage and control and for the public to discern (Hudson, 2004). This issue was addressed in the next paradigmatic shift where the organising principle of government operations went from ‘markets’ to ‘networks’ (Kickert et al., 1997, Hudson, 2004 and Loffler, 2004). In response to calls for ‘personalisation of services’, previously fragmented services were brought together to satisfy public needs which by now had diversified considerably. For the latter to be attended appropriately, policy-making started to rely on the input of a variety of actors, amongst which the service users themselves (Bovaird, 2007) and the voluntary and community sector organisations (Osborne et al., 2002) through their unique expertise in the needs of the groups for whom they advocate (for example, children, veterans, elderly, disabled and so on). Policies are increasingly both designed and implemented collaboratively by public, private and voluntary sector agencies, which are encouraged to work together to find local solutions for localised problems, rather than just apply national legislation. This has lead to the creation of dense and complicated communication networks amongst a plurality of actors whereas, at the same time, the delegation of authority has allowed unprecedented discretion in the decision making of public sector managers and workers, challenging traditional models of public accountability (Klijn, 2008). Public accountability is seen in relation to the control of public sector operations exercised by the central government. This paper argues that, in recognition of the increasing level of uncertainty in today's policy environment, governments have started to actively seek to complement their diagnostic systems of control with more interactive ones. The case study of the Every Child Matters (ECM) policy change in England is used to illustrate this shift in emphasis. To this end, we contrast the management control systems (MCSs) used before and after the policy change (2006, when the 2004 legislation came into effect), to suggest that the redefinition of the policy environment as more uncertain has resulted in a change in the control philosophy of the government from ‘constraining’ to ‘empowering’. This is interpreted as a reaction to the raise of uncertainty in policy-making in the context of the contemporary ‘risk society’ (Beck, 1992). Prior empirical literature on the impact of uncertainty on inter-organizational controls, either in private or in public settings, is admittedly scant (Caglio and Ditillo, 2008). Although a number of management control theorists have considered uncertainty, in its various forms and guises, as a contingent factor affecting the design and use of control systems (see, for example, Galbraith, 1973, Williamson, 1975, Ouchi, 1979 and Chenhall, 2003), its impact on inter-firm control mechanisms has been only partially investigated. In their recent review of this literature, Caglio and Ditillo (2008) report that only Dekker (2004) included uncertainty in his model, yet the role of uncertainty was considered subordinate to other variables such as interdependence and asset specificity. This paper adds to this emerging literature by providing rich empirical descriptions of an area of public policy where uncertainty is – and has recently been recognised as – inherent (Munro, 2011). Its aim is to increase our conceptual understanding of the effect of uncertainty on the choice and use of control mechanisms in inter-organizational contexts, which is presently only partial (Das and Teng, 2001). Alongside this contribution to the inter-organisational relationships literature, we also aim to add to the recent stream of research emerging in the management control literature in public sector in general (e.g. Kloot, 1997, Kober et al., 2007 and Batac and Carassus, 2009) and in public sector partnerships in particular (see Barretta and Busco's (2011) editorial in the special issue of Management Accounting Research on Management Control Innovations in Public Sector Networks, Vol. 22, No. 4).

Public organisations are historically reliant on bureaucratic control, and are typically characterised by formalized procedures, hierarchical relationships and the principles of legality and compliance with legislation (Batac and Carassus, 2009). Over the past half a century, however, a number of other influences came into play, first around the adoption of private sector values and then, around partnership working. The control mechanisms in place for the government to ensure compliance of policy implementation with policy strategy had to respond to these influences and adapt accordingly. Using a case study from the policy area of children and young people in England, our research reflected on the possibility of a shift in the government's control systems, whereby they are increasingly looking to complement their diagnostic systems with alternative systems of control, in an attempt to facilitate the interaction of different actors involved in policy-making. The introduction of the ECM has redefined the role of agencies with stakes in the welfare of children and young people, in terms of their joint responsibility for children's well-being, as this emerges from their statutory duty to collaborate with other local agencies in the local authority area. Today, it is less about each agency working to fulfil their own organisational priorities around children (e.g. education: school attendance, police: punishing perpetrators, etc.) and more about them fulfilling an overall, common goal, incorporated in the five objectives of safeguarding children, broken down into local strategies and monitored accordingly through LSCBs (‘Brempton’ Council, 2006). From an organisational control point of view, the ECM policy has marked a major shift in emphasis: away from constraint and towards freedom in policy implementation. Whereas before 2006 there was a marked reliance on diagnostic control systems, after 2006 the forward-looking levers of control have been given more emphasis. The case study offers evidence of that, both in terms of adopting interactive systems of control and in terms of using traditional, diagnostic systems to foster interactivity and dynamism. On the whole, the implications of this shift in emphasis is that now there is a more balanced approach to control by the government, which allows for the management of both the creative innovation and the predictable goal achievement necessary in the current uncertain environment. According to Simons (1995), this is precisely the essence of management control: balancing the competing demands for freedom and constraint; that is, in our context of interest, the freedom to create local solutions to local policy problems and the constraint needed to ensure compliance with the government's mandate. While this paper suggests that the public sector is moving away from an over-reliance on feedback control mechanisms and adopting more feed-forward types of control, there is certainly a need for other case studies (perhaps from other policy areas) to give this observation more weight. Nevertheless, one of this study's contributions is that it enriches our understanding of levers of control in the public sector. In this respect, it adds to the work of Kloot (1997), Kober et al. (2007) and Batac and Carassus (2009) by providing empirical descriptions of control systems from the policy area of children and young people. Furthermore, it extends the emerging literature on management control in inter-organisational public sector contexts by illustrating how management control practices enable cooperation between partners driven by different organisational and professional goals by showing both managerial (e.g. JAR) and non-managerial (unintended consequences of LSCBs’ introduction) mechanisms of control. In doing that, we have addressed (Barretta and Busco, 2011) call for research in this respect. Finally, at the theoretical level, the study highlights the impact of uncertainty on inter-organisational controls in the public sector (i.e. mandated partnerships such as the LSCBs and cross-ministerial inspections such as the JARs). In terms of Simons's framework of control, what we have argued in this paper is that effective control is more than anything else a matter of striking the right balance between these two forces of control and innovation, a balance which is likely to differ in relation to the level of uncertainty the organisation faces. Organisations facing higher levels of uncertainty are likely to introduce more interactive systems, and use their existing control systems more interactively, than organisations that encounter – or perceive to encounter – more predictable and stable environments. Equally, organisations that operate, or perceive they operate in environments that are becoming more uncertain, are likely to shift the emphasis of their controls to more interactive systems and to make more use of these systems. Although drawing general conclusions from this one study should be done with caution, our analysis, based on the theoretical ‘skeleton’ of Simons's levers of control, suggests that the ECM policy shift is underpinned by a change in government's attitude to control and accountability in line with fundamental societal changes as described in the paper. Our ‘middle range’ standpoint inhibits a discussion about the power of generalisation, as every context is different, however we suggest that future studies in other policy areas may enhance our understanding of government's use of control systems. Other avenues for further research by way of extending our findings include an analysis of task uncertainty as consequence of ambiguity in government regulations, as well as investigating the links between uncertainty in the policy realm, ambiguity in regulation and task uncertainty for front-line professionals; and, finally, examining the interplay between trust in, and control of, welfare professionals in light of perceptions of increased uncertainty in the policy domain.