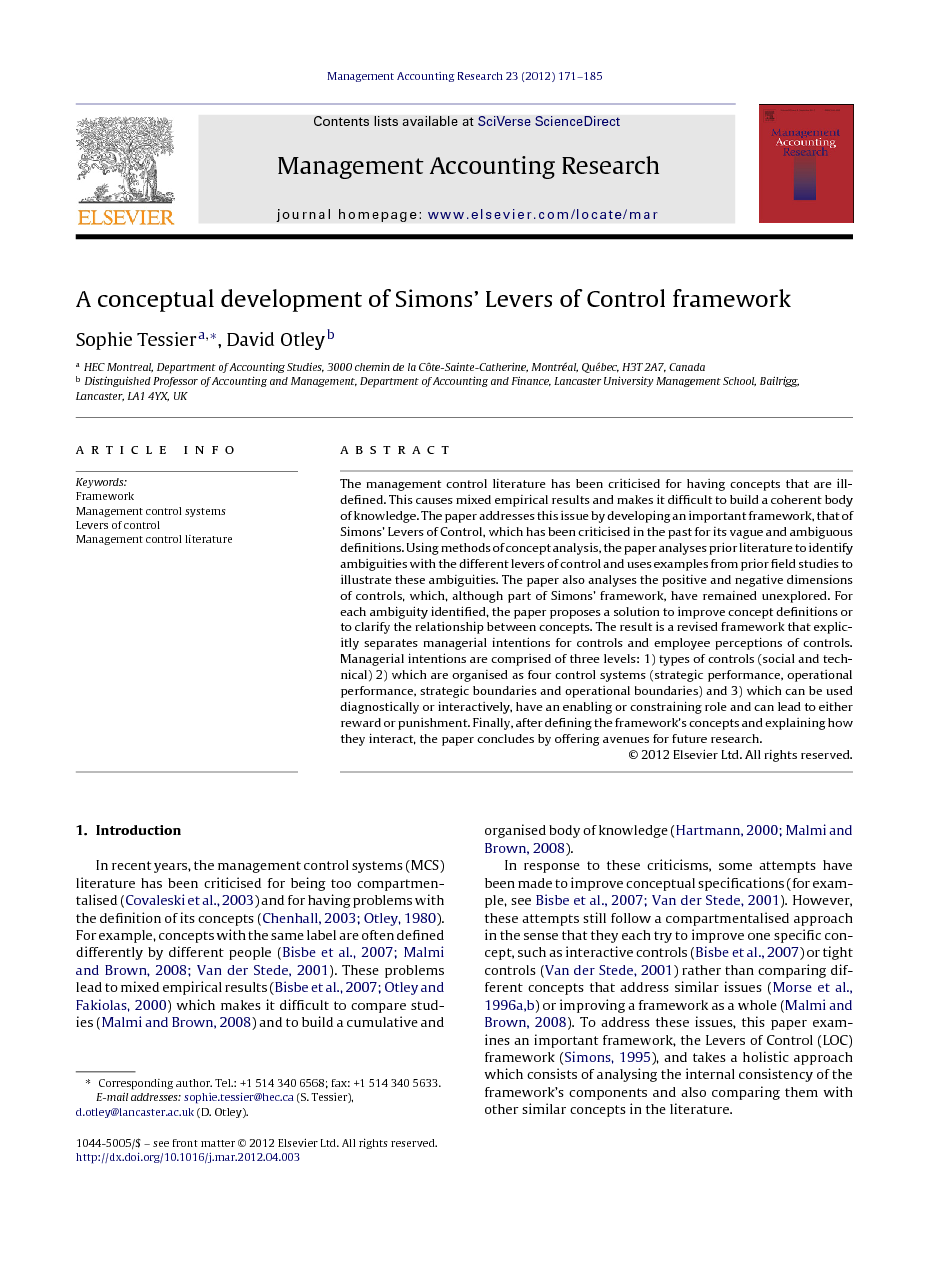 The management control literature has been criticised for having concepts that are ill-defined. This causes mixed empirical results and makes it difficult to build a coherent body of knowledge. The paper addresses this issue by developing an important framework, that of Simons’ Levers of Control, which has been criticised in the past for its vague and ambiguous definitions. Using methods of concept analysis, the paper analyses prior literature to identify ambiguities with the different levers of control and uses examples from prior field studies to illustrate these ambiguities. The paper also analyses the positive and negative dimensions of controls, which, although part of Simons’ framework, have remained unexplored. For each ambiguity identified, the paper proposes a solution to improve concept definitions or to clarify the relationship between concepts. The result is a revised framework that explicitly separates managerial intentions for controls and employee perceptions of controls. Managerial intentions are comprised of three levels: 1) types of controls (social and technical) 2) which are organised as four control systems (strategic performance, operational performance, strategic boundaries and operational boundaries) and 3) which can be used diagnostically or interactively, have an enabling or constraining role and can lead to either reward or punishment. Finally, after defining the framework's concepts and explaining how they interact, the paper concludes by offering avenues for future research.

In recent years, the management control systems (MCS) literature has been criticised for being too compartmentalised (Covaleski et al., 2003) and for having problems with the definition of its concepts (Chenhall, 2003 and Otley, 1980). For example, concepts with the same label are often defined differently by different people (Bisbe et al., 2007, Malmi and Brown, 2008 and Van der Stede, 2001). These problems lead to mixed empirical results (Bisbe et al., 2007 and Otley and Fakiolas, 2000) which makes it difficult to compare studies (Malmi and Brown, 2008) and to build a cumulative and organised body of knowledge (Hartmann, 2000 and Malmi and Brown, 2008). In response to these criticisms, some attempts have been made to improve conceptual specifications (for example, see Bisbe et al., 2007 and Van der Stede, 2001). However, these attempts still follow a compartmentalised approach in the sense that they each try to improve one specific concept, such as interactive controls (Bisbe et al., 2007) or tight controls (Van der Stede, 2001) rather than comparing different concepts that address similar issues (Morse et al., 1996a and Morse et al., 1996b) or improving a framework as a whole (Malmi and Brown, 2008). To address these issues, this paper examines an important framework, the Levers of Control (LOC) framework (Simons, 1995), and takes a holistic approach which consists of analysing the internal consistency of the framework's components and also comparing them with other similar concepts in the literature. Simons’ framework has been used frequently in the literature over the years with almost 790 citations (Google Scholar, 2011). It has many strengths such as including different types of controls and providing a broad perspective (Ferreira and Otley, 2009). However, its main weakness is the definitions of its concepts which are too vague and sometimes ambiguous (Ahrens and Chapman, 2004, Bisbe et al., 2007 and Ferreira and Otley, 2009). While there have been some attempts at refining the definitions of diagnostic and interactive control systems (Bisbe et al., 2007 and Ferreira and Otley, 2009), belief and boundary control systems have received less attention. As a result, there have been calls for these levers of control to be investigated in more depth (Collier, 2005 and Nixon and Burns, 2005) and more recent papers now include all four levers (Granlund and Taipaleenmäki, 2005, Marginson, 2002, Mundy, 2010, Tuomela, 2005 and Widener, 2006). However, no specific attempts have been made to improve their definition. Moreover, there have been very few attempts at improving the framework as a whole. Ferreira and Otley (2009) have proposed a new framework based in part on the LOC framework, but the end result does not include belief and boundary control systems, an exclusion that has been previously criticised (Collier, 2005). Finally, the idea of positive and negative controls, which is present in Simons’ framework, has received very little attention and no attempts have yet been made to improve the definition of this important concept. This paper develops a revised version of the LOC framework which improves on existing concept definitions to give it greater internal coherence, while retaining the useful elements of the original framework. While there are four major methodological approaches to concept analysis (Wilson-derived methods, qualitative methods, critical analysis of the literature and quantitative methods) (Morse et al., 1996a), this paper is mainly based on a critical analysis of the literature. In addition, qualitative methods are also used, especially for the positive and negative concepts since, except for Simons’ use of these concepts there is no prior literature available. Our qualitative approach uses some examples from three case studies to illustrate problems with concept definitions.1 These are from two companies in the chemical industry and one service-based company.2 However, this is not an empirical paper and examples from the cases are added only to illustrate and support the development of the framework. It has to be noted that quantitative methods are not used because these methods are appropriate only when concepts have reached a certain level of maturity (Bisbe et al., 2007 and Morse et al., 1996a), which is not the case for belief and boundary control systems. The remainder of the paper is structured as follows. First, a summary of Simons’ framework is presented. Then, ambiguities in the literature are analysed to identify what the revised framework needs to clarify. This incorporates support from the literature, examples from the field to illustrate the ambiguities and suggested improvements. Based on the analysis, an improved version of the LOC framework is proposed and explained. The result is a framework in which components are better defined and more tightly integrated, and therefore more useful for holistic empirical research on control packages. Finally, the paper concludes with the implications for future research.

The aim of the paper was to build on a frequently used framework, namely Simons’ LOC framework (1995), that has been criticised for its vague concept definitions. Based on the literature and some examples from three case studies, ambiguities regarding the LOC framework and the literature in general were identified. For each ambiguity a solution was proposed. The revised framework used these suggestions to clarify Simons’ framework. It introduced two groups of actors, managers (intention) and employees (perception) and focused mainly on the former. Managerial intentions are comprised of three levels of choice: (1) types of controls (social and technical), (2) objectives of controls (performance or compliance) which are regrouped into four control systems operating at two organisational levels (operational and strategic performance control systems and business conduct and strategic boundaries) and (3) other choices regarding use of controls (interactive/diagnostic), role of controls (enabling/constraining) and consequences linked to controls (rewards/punishments). Finally, the paper proposes several avenues for future research based on the revised framework such as the perception of controls, control efficiency and concept definition.