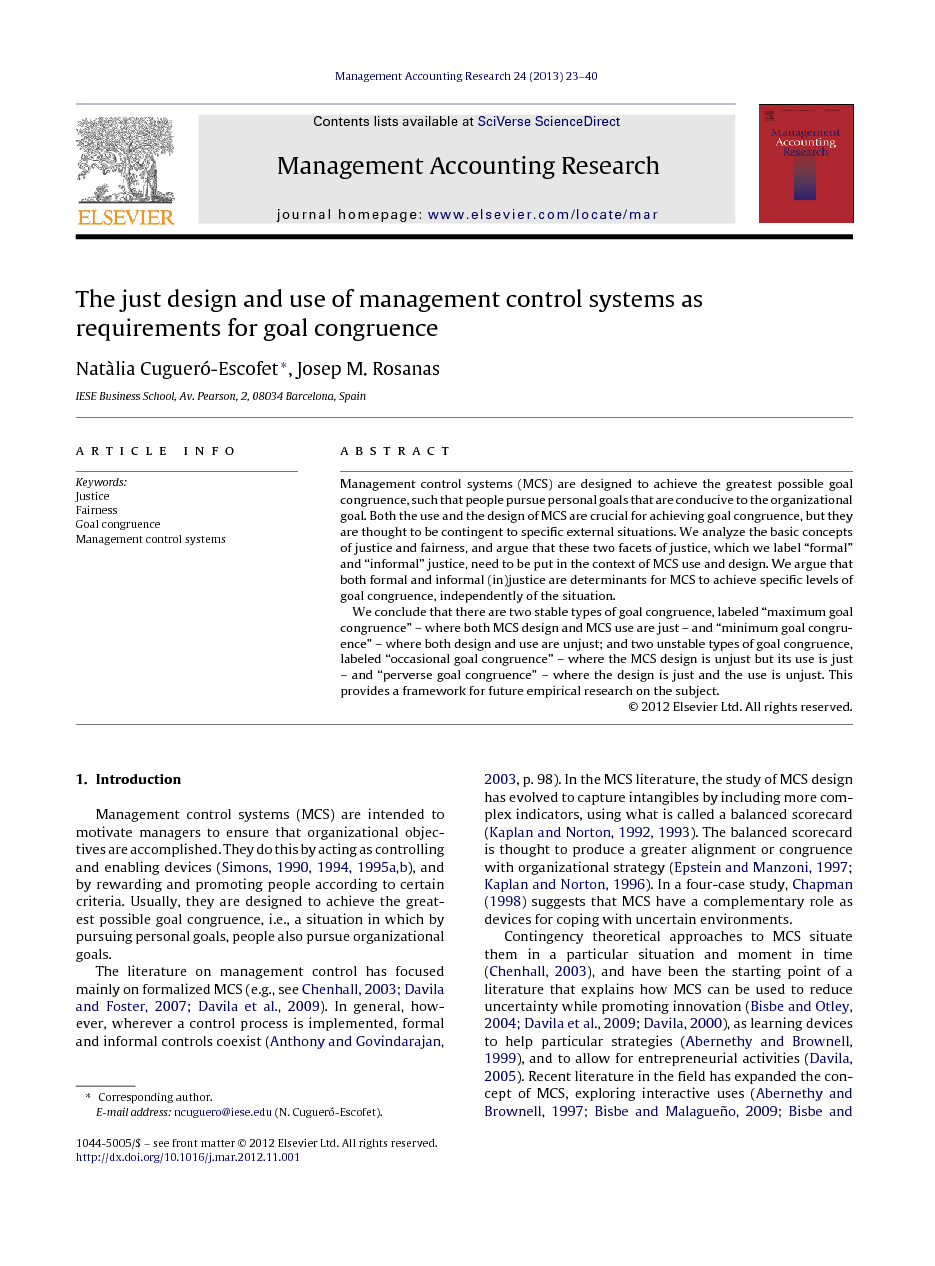 To conclude, attempts have been made in MCS research to empirically show the importance of fairness. However, there is no theoretical work that deals in depth with the prescriptive role of justice in MCS design and MCS use. We have shown that every MCS has both design features and informal processes of use, or ways in which it can be managed. MCS management is subjective, as it involves managers’ making decisions and acting in relation to outcomes and procedures when the system is applied in a specific context. Justice requirements therefore need to be linked both to the design of a MCS and to subjective uses of the MCS. In our analysis we consider managerial action and MCS design in combination and shows which combination of the two is conducive to a maximum level of goal congruence over time. We have made an effort to bring together the literature on MCS, the recent literature on justice, prescriptive models and empirical evidence, and we have listed the requirements of a just MCS design and fair use of the MCS. This allows us to finally give a specific role to informal aspects of MCS use that previously have been studied in terms of users’ motives, but not in terms of the consequences they may have for goal congruence. Our work provides a theoretical grounding for future research, which is a necessary step before any progress can be made in this important stream of research into the role of justice in MCS. Furthermore, we have developed a model of goal congruence types, as an effect of the justice of the system's design and use. This leaves us with a range of possible goal congruence situations that lead to different learning dynamics over time. Occasional goal congruence deserves a special mention. When it happens, positive evaluative learning takes place and managers strive to be just, subjectively seeking immediate solutions to repair the unfairness caused by an unjustly designed MCS. In the end, the system itself improves in terms of justice design. This learning increases managers’ justice and eventually transforms the situation into one of maximum goal congruence. For this reason, we argue that subjective aspects of justice, manifested in the way the system is used, are capable of improving the organization and increasing people's identification with the organization's mission and their commitment to its goals. Over time, this leads to greater goal congruence. We think that our model allows a deeper understanding of why justice is important and why subjectivity is unavoidable, making the notion of a perfect mechanical design that needs no people and creates a stable situation of goal congruence unrealistic. In contrast, having people who are trained and willing to be fair is a starting point for creating better control systems and better organizations. We need to be cautious in dealing with intermediate situations that depart from our stereotyped four states. We have mentioned that systems can be partially just in terms of design. This can mean departing from our ideal situations. At the same time, we can have different levels of informal justice. For the same level of actual justice of the design, depending on the level of informal fairness, goal congruence can improve more or less quickly. Further research is needed to consider the differing capacity of different aspects of informal justice to improve formal systems, thus creating better goal congruence. We also need to increase our knowledge through empirical research that examines whether and to what extent these states and dynamics actually exist. Such future research will also help to refine the model and provide a clearer understanding of intermediate situations of formal fairness. However, we believe that the conceptual clarification that this paper provides is a necessary step before undertaking such empirical research.