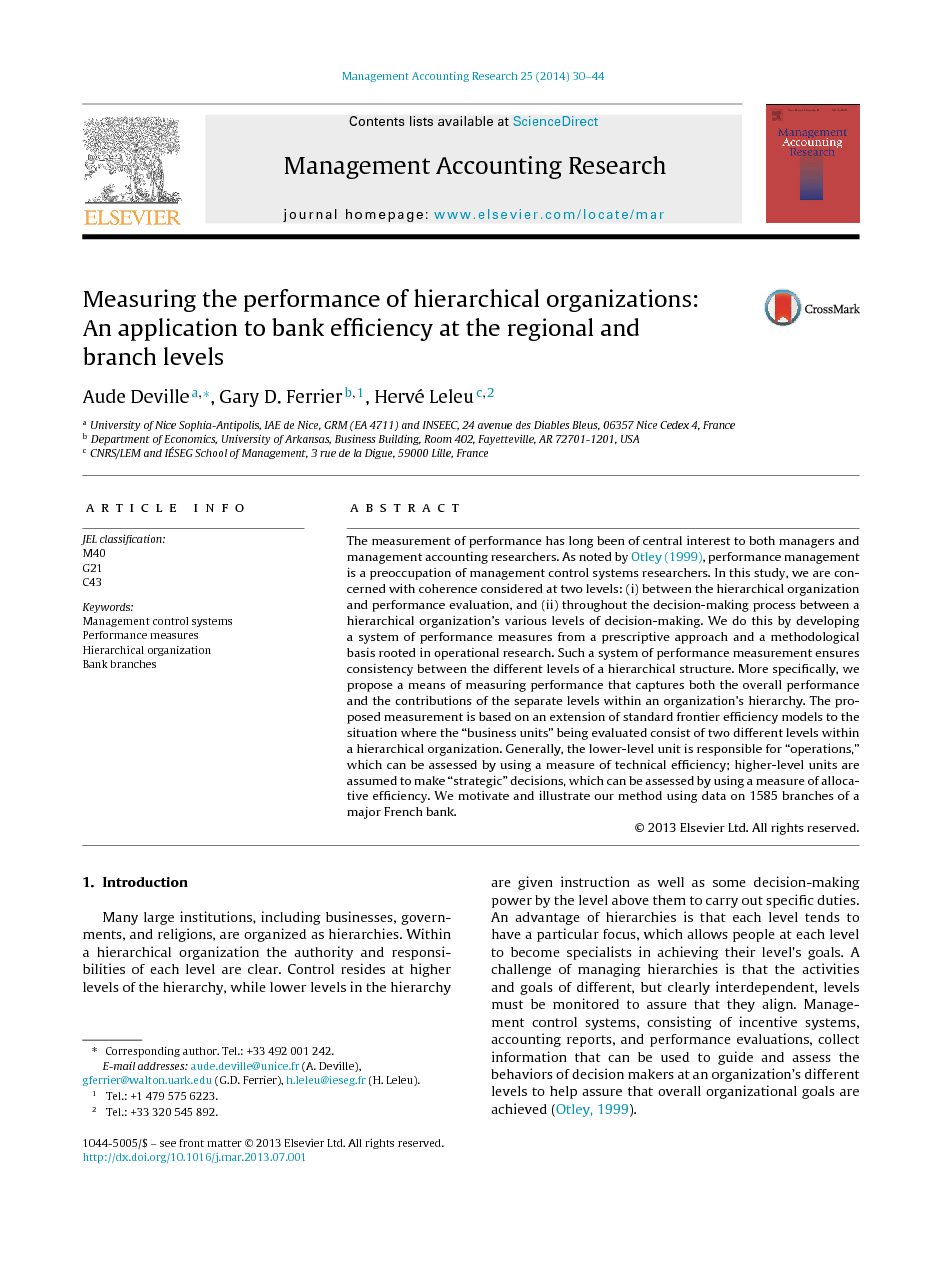 The measurement of performance has long been of central interest to both managers and management accounting researchers. As noted by Otley (1999), performance management is a preoccupation of management control systems researchers. In this study, we are concerned with coherence considered at two levels: (i) between the hierarchical organization and performance evaluation, and (ii) throughout the decision-making process between a hierarchical organization's various levels of decision-making. We do this by developing a system of performance measures from a prescriptive approach and a methodological basis rooted in operational research. Such a system of performance measurement ensures consistency between the different levels of a hierarchical structure. More specifically, we propose a means of measuring performance that captures both the overall performance and the contributions of the separate levels within an organization's hierarchy. The proposed measurement is based on an extension of standard frontier efficiency models to the situation where the “business units” being evaluated consist of two different levels within a hierarchical organization. Generally, the lower-level unit is responsible for “operations,” which can be assessed by using a measure of technical efficiency; higher-level units are assumed to make “strategic” decisions, which can be assessed by using a measure of allocative efficiency. We motivate and illustrate our method using data on 1585 branches of a major French bank.

Many large institutions, including businesses, governments, and religions, are organized as hierarchies. Within a hierarchical organization the authority and responsibilities of each level are clear. Control resides at higher levels of the hierarchy, while lower levels in the hierarchy are given instruction as well as some decision-making power by the level above them to carry out specific duties. An advantage of hierarchies is that each level tends to have a particular focus, which allows people at each level to become specialists in achieving their level's goals. A challenge of managing hierarchies is that the activities and goals of different, but clearly interdependent, levels must be monitored to assure that they align. Management control systems, consisting of incentive systems, accounting reports, and performance evaluations, collect information that can be used to guide and assess the behaviors of decision makers at an organization's different levels to help assure that overall organizational goals are achieved (Otley, 1999). The first contribution of this study is to develop an approach to measure the overall performance of a simple hierarchical organization that decomposes into measures of the individual performances of the different levels of the hierarchy. In particular, we propose a novel variant of frontier analysis, a benchmarking tool based on observed best-practice. De Haas and Kleingeld (1999) noted that this type of project is unusual in the literature. Like De Haas and Kleingeld (1999), we believe that the formulation of strategy and achievement desired objectives involve both individual wills and collective responsibility. Management control systems, more particularly performance measures, help to establish consistency between the “individual wills” of actors or groups of actors and collective responsibility. Ultimately, the purpose of management control systems is to improve organizational performance by helping to achieve strategic goals. A second contribution of this paper is to illustrate how frontier analysis can be used in management accounting. While frontier analysis is widely used in economics, management science, and engineering (Banker et al., 1987), very little research in management accounting utilizes the notions and models of frontier analysis. This finding is surprising in view of the extensive managerial accounting literature concerning non-financial performance measures; for example, Callen et al. (2005) demonstrate that productivity measures are essential indicators of non-financial performance. In an increasingly competitive global economy, both private and public entities are keenly interested in improving productivity. Frontier analysis assesses performance against best practice, allowing organizations to measure and track productivity. We develop our model in the context of a particular hierarchical organization, a large bank that operates an extensive network of branches. Using data from a major French bank, we apply and interpret our novel rendering of frontier analysis.3 Higher-level units, top bank management in our illustration, within a hierarchical organization are assumed to make “strategic” decisions. The higher-level, or centralized, decisions also involve the allocation of resources among lower-level units; hence, higher-level units can be assessed using a measure of allocative efficiency. Allocative efficiency measures whether the mixes of inputs and/or outputs have been optimized. The lower-level units in the hierarchy, bank branches in our illustration, are responsible for “operations.” Their performance can, therefore, be assessed using a measure of technical efficiency; that is, a measure of whether the levels of inputs and/or outputs have been optimized. As in the case of standard applications of frontier analysis models, the overall performance of a hierarchical organization is given by the combination of the technical and allocative performances of the lower- and higher-levels, respectively, of the hierarchy. A third contribution of this study is thus to add to the extensive literature on bank efficiency by simultaneously examining efficiency at both the “head office” and branch levels—an analysis, which to the best of our knowledge, has not been done. Identifying and quantifying performance across different levels of an organization can provide valuable insights into how to improve overall organizational performance.4 For example, the controllability principle argues that performance should be evaluated on the basis of factors that are within the control of the decision maker. Different factors are typically within the control of decision makers at the higher and lower levels of an organization; evaluating the levels separately provides a stronger link between decision making and performance evaluation than does a single evaluation of the organization's overall performance. Another insight available under our approach to performance evaluation is how each level of an organization contributes to overall performance. In addition, the correlation between performances at different levels of a hierarchical organization can be assessed. Finally, insight is gained into how performance varies across the different environments in which lower levels of the hierarchy operate. The remainder of the paper is organized as follows. In Section 2, we discuss this study in the context of organizational division of responsibility, the bank performance literature, and the frontier analysis literature. In Section 3, we develop the model used to measure performance at the different levels of the hierarchy and show how these measures determine overall organizational performance. Section 4 provides an application of the model to a major French banking organization with 1585 branches in 17 different regions of France. In Section 5, we present a summary and our conclusion.