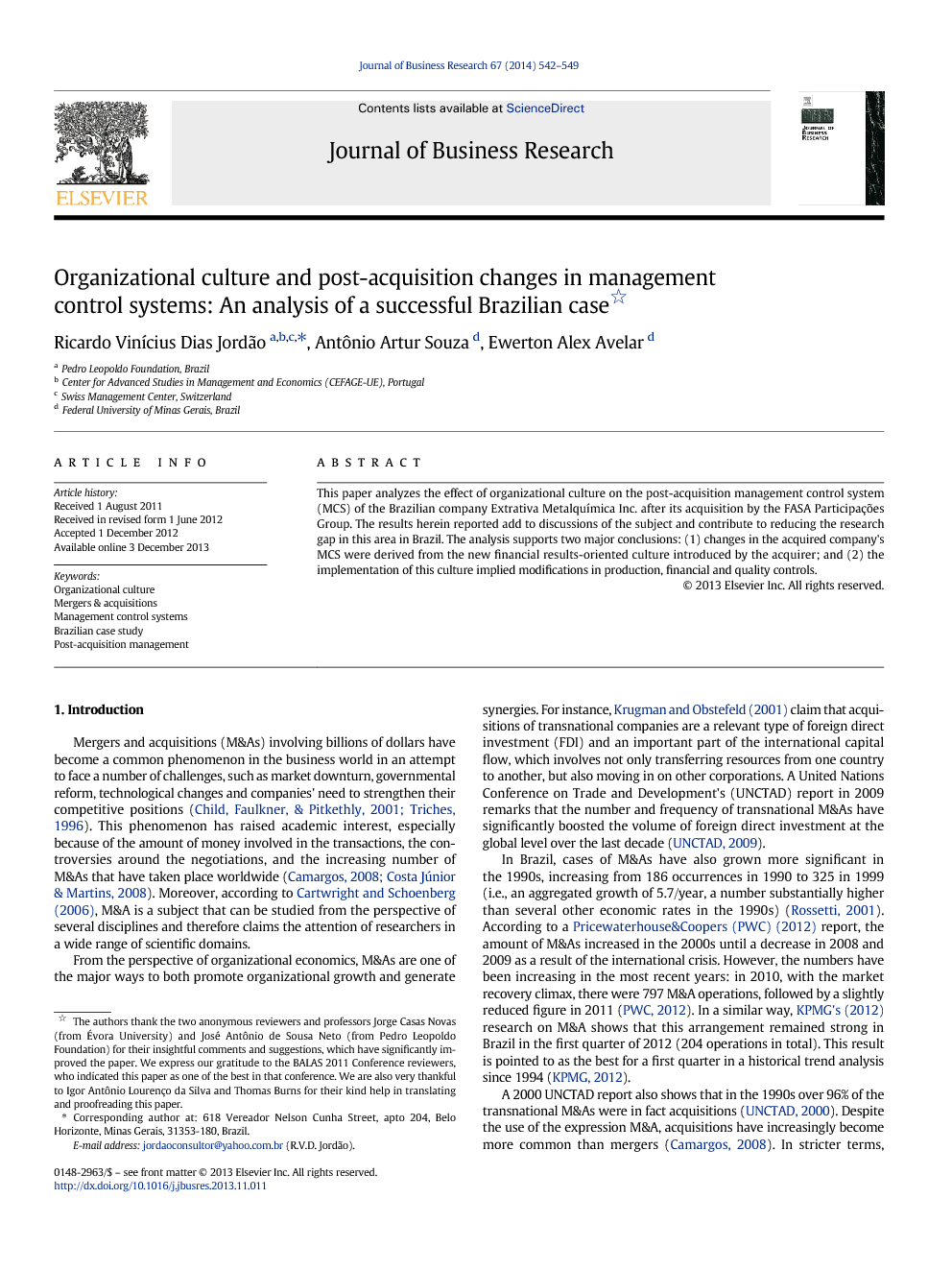 This paper analyzes the effect of organizational culture on the post-acquisition management control system (MCS) of the Brazilian company Extrativa Metalquímica Inc. after its acquisition by the FASA Participações Group. The results herein reported add to discussions of the subject and contribute to reducing the research gap in this area in Brazil. The analysis supports two major conclusions: (1) changes in the acquired company's MCS were derived from the new financial results-oriented culture introduced by the acquirer; and (2) the implementation of this culture implied modifications in production, financial and quality controls.

In spite of the numbers of M&As and the massive amount of money that most of them involve, studies have shown that many of them turn out to be unsuccessful transactions. These studies have also demonstrated that, on the one hand, the preexisting conditions of the acquired and acquiring companies are variables that fail to explain the post-acquisition performance and that, on the other, post-acquisition management is a key factor for the success and added value of acquisition transactions. However, the administration usually faces the challenge of implementing the MCS and any other measures necessary, as much as possible, to assure the achievement of the pre-acquisition goals and minimize the cultural clash between acquiring and acquired companies. The data analysis herein reported points out that the new MCS introduced in the target company involved both formal and informal control mechanisms. These mechanisms aimed at promoting the functional integration of sectors, processes, people, and activities, and consequently optimize the use of material, financial, technological, intellectual, and production resources that ensure higher competitive positions. The findings corroborate international studies and bring a fresh contribution to this topic, still scarcely investigated in the Brazilian context. According to the research data, the former control culture involved the company's high autonomy in relation to the central office, a poor use of resources, and a lack of clear strategies and well-defined objectives. This is quite different from the current culture, which still demands more skills and knowledge from the administration, as well as more systematization of the acquirers' strategic planning, but brings about a different managerial style, highly attached to the FPG CEO, who shows charismatic leadership in the target company. As a matter of fact, mployees clearly associate the acquired company's current success with the CEO's managerial style and regard him as a “father”. In other words, the current control method is predominately informal and paternalist, albeit mixed with some results-driven control indicators. The MMM MCS was very confusing, rudimentary, and poor, bringing low information quality. After the acquisition, the employees could perceive a drift away from the previous culture of low organization and segregation of organizational areas and functions as well as of employees and leaders. The current EMSA MCS is based on traditional economic, financial, quality, and productivity indicators, but complements them with other indicators focusing on environment issues, the company's competitive position, clients' satisfaction with the products, and stakeholders' interests. The new control culture, which has been gradually enhanced in the company, draws on the use of both formal and informal control mechanisms aiming at: (1) performance assessment; (2) review of processes; (3) systematization of activities; (4) planning; (5) information flow and communication; (6) encouragement of adequate behavior; and (7) employees' internalization of collective-shared values as a means of fostering both individual and group self-control. A series of changes in the MCS adopted in the target company have taken place as a result of the acquirer's new corporate strategy, the integration of the new organizational structure, and the enhancement of FPG's control culture over the EMSA activities. Most important, the results point out that such changes were directly or indirectly derived from the acquirer's growth strategy, which has eventually contributed to turn EMSA into the second largest producer and processor of graphite worldwide. In conclusion, this case study has found: (1) changes in the acquired company's MCS resulting from the new results-oriented culture introduced by the acquirer, which aimed at turning EMSA into the world leader of the graphite industry within 10 years; and (2) changes in the production, financial, quality, and social-cultural controls as a means of opening avenues for the implementation of the acquirer's new culture. One limitation of this research is the fact that the results cannot be generalized, as the analysis is limited to a single case study. The results found in the Brazilian context, however, seem to corroborate a series of studies focused on other contexts, such as those reported in Jones (1985a), Larsson and Lubatkin (2001), and Calori et al. (1994). Moreover, some findings, such as a charismatic leadership and results-driven control indicators, demonstrate that those factors can be very important aspects in supporting M&As processes. Furthermore, like Weber and Camerer's (2003) warning, the findings herein described support recommendations that cultural aspects should not be left aside as a secondary or unimportant item in M&A processes. Therefore, building on the several studies pointing in the same direction, the main findings and conclusions herein reported are believed to be of great support in M&A decision making processes in the Brazilian context. Given these results and bearing in mind the limitations of this research, new studies on post-acquisition MCS in different contexts should be pursued to provide a deeper account of the relationship between such changes and contingency variables, such as control culture, integration, and technology.