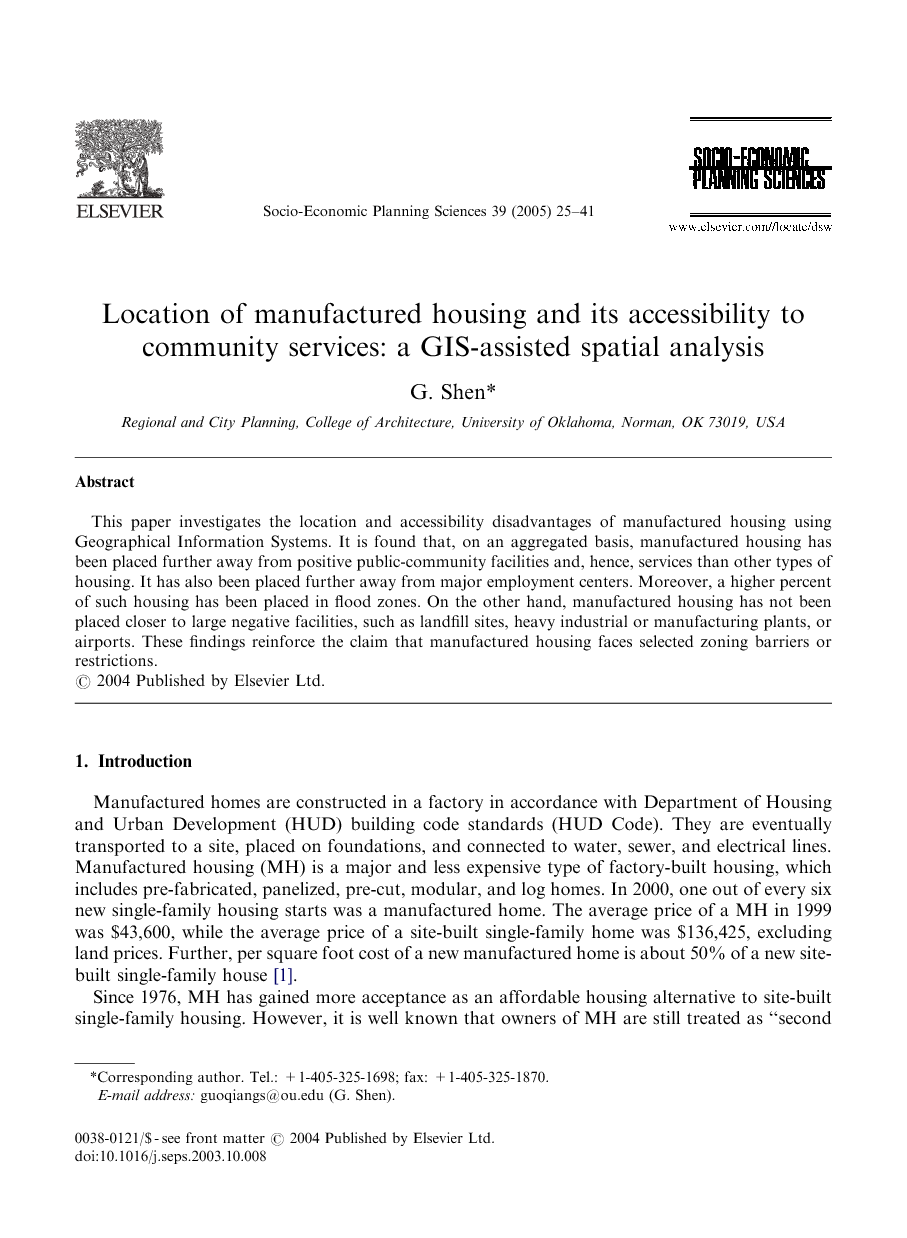 Manufactured homes are constructed in a factory in accordance with Department of Housing and Urban Development (HUD) building code standards (HUD Code). They are eventually transported to a site, placed on foundations, and connected to water, sewer, and electrical lines. Manufactured housing (MH) is a major and less expensive type of factory-built housing, which includes pre-fabricated, panelized, pre-cut, modular, and log homes. In 2000, one out of every six new single-family housing starts was a manufactured home. The average price of a MH in 1999 was $43,600, while the average price of a site-built single-family home was $136,425, excluding land prices. Further, per square foot cost of a new manufactured home is about 50% of a new site-built single-family house [1]. Since 1976, MH has gained more acceptance as an affordable housing alternative to site-built single-family housing. However, it is well known that owners of MH are still treated as “second class citizens” and special land use or zoning ordinances are thus devised [2]. These special zoning regulations seek to protect the safety, health, and welfare of the local citizenry; however, they often lead to restrictions on the location and placement of MH. This is especially so given the fact that about 25% of all new single-family homes sold in the United States in the past decade is manufactured housing. Today, more than 21.4 million, or 7.6%, of the US population live in 8.9 million manufactured homes [1], while approximately 88% of existing manufactured home owners report satisfaction with their housing lifestyle [3]. The dominant form of zoning barriers or restrictions against MH is related to specific subdivision provisions, such as density, lot size, floor area, roof pitch, exterior siding, or architectural style [4], [5] and [6]. Often, these cases are resolved in court at various levels [4], [6], [7] and [8]. This subdivision-type restriction and its legal implications, however, are not a concern of this research. Rather, the current study focuses on the location and accessibility of MH with respect to public and community services. As zoning is essentially the designation of various uses to land parcels in a community, when a use is assigned to a parcel at a specific location, other possible uses most likely have to be allocated to other parcels at different locations. Therefore, an intrinsic aspect of zoning is location and its corresponding accessibility. For example, when a parcel is zoned for commercial use and a new community shopping center is built on it, the parcel typically cannot be rezoned for another use, while the center would certainly change the level of shopping accessibility for some homes. Since location and accessibility are related to potential risks, such as closeness to hazardous materials sites, and well-being, such as proximity to schools or jobs, local zoning plays an important role in avoiding the risks and increasing the well-being of all residents [9]. Fair zoning practices should explicitly consider the location aspect of zoning to ensure spatially and functionally balanced land uses. This study thus examines the fairness of local zoning practices through spatial relationships between land use for residential housing and land use for public-and-community facilities (PCF), or, more specifically, the accessibility of housing to facilities. The study is based on typical classifications of residential homes and public-community facilities. Countywide building and parcel databases from Pitt County, North Carolina, were used. The optimization model developed here is based on the classical assignment model and is implemented for selected housing and facility types within the ArcView GIS environment [9]. The assignments from ArcView were further processed to produce descriptive statistics. The paper is organized as follows: following the introduction, Section 2 presents the problem statement, as well as the conceptual development of fair zoning in terms of equal accessibility. Section 3 provides the research methodology, which covers such issues as model assumptions, formulations, procedure and data processing, while Section 4 discusses the results and highlights major findings. Conclusions and remarks are included in Section 5.

Our research indicates that, on an aggregated basis, manufactured housing has been placed further away from positive facilities and services than other types of housing. MH has also been placed further away from major employment centers than have other types of housing. Moreover, a higher percentage of MH has been placed in flood zones. However, compared to most other types of residential properties, manufactured housing has also been placed further away from most large-scale negative facilities, such as landfills and heavy industrial or manufacturing plants. The location and accessibility disadvantage of MH seems to arise since most important public-community facilities and services are located within cities or suburbs, while the majority of manufactured homes have been zoned out of city and suburban locations to more rural areas. While the location of manufactured housing is heavily influenced by individual residential choices and the free real estate market, it is also heavily shaped or reshaped by local zoning regulations and practices. It thus appears reasonable to suggest that zoning barriers and restrictions, as experienced and realized by many people, at least partially contribute to the aggregated location and accessibility disadvantage of MH. This disadvantage of MH to public-community facilities is especially significant since these facilities include hospitals, health care clinics, and police and fire stations. The current research clearly shows that MH has been placed further away from facilities whose services may be matters of “life and death”. In case of fire rescue service, the location and accessibility disadvantage of manufactured housing requires a longer distance for a fire rescue squad to travel from a nearest fire station to a MH. This often implies a longer response time, which is critical to the level of property damage and human casualty caused by fire. It is thus recommended that zoning officials and urban planners consider equal accessibility and fair zoning concepts in policy and practice with respect to MH. A good starting point would be to explore effective ways to increase the accessibility of MH to positive facilities, and to prevent MH from being built within flood plains. It is also suggested that if local land use, zoning, and subdivision standards are met, new MH developments should not be excluded, in general, from cities or suburbs and, in particular, from built-up urban residential neighborhoods where scattered vacant lots are available or dilapidated site-built homes are to be reconstructed. Continued exclusion of manufactured housing from these areas will likely indicate barriers, or even discrimination, in zoning policies and practices. In addition to aggregated distances and accessibilities from homes to facilities, the modeling approach developed in this research can also be used to study spatial balance and efficiency issues related to distribution of public and community services over a geographic, political, or administrative jurisdiction. For example, one can look at spatial location patterns of public libraries, schools, jobs, and hospitals with respect to major residential districts in a city. This could help determine whether these facilities are spatially balanced such that their service deliveries are efficient. Our approach can also be used to address important and sensitive policy issues, such as environmental equity and justice, in urban planning and regional management. For example, in seeking a new hazardous waste site, planners could ensure that it does not add to negative impacts currently endured by selected population subgroups. The current study is based on the case of Pitt County, North Carolina. However, given that the county is primarily rural, further research is needed to test the applicability of our findings to more urban situations. In addition, various geographic units, smaller or larger than the county scale, should be used to explore the validity of our findings, their sensitivity, and the modeling process itself. Further, more precise classifications of facilities and residential properties should be considered for problem-specific studies. The direct distance measurements used in this study could, for example, be replaced with driving distances along street networks of a city or a region. Finally, future research might consider other social or economic indicators, such as race, income, and property value, as they interact with spatial variables.