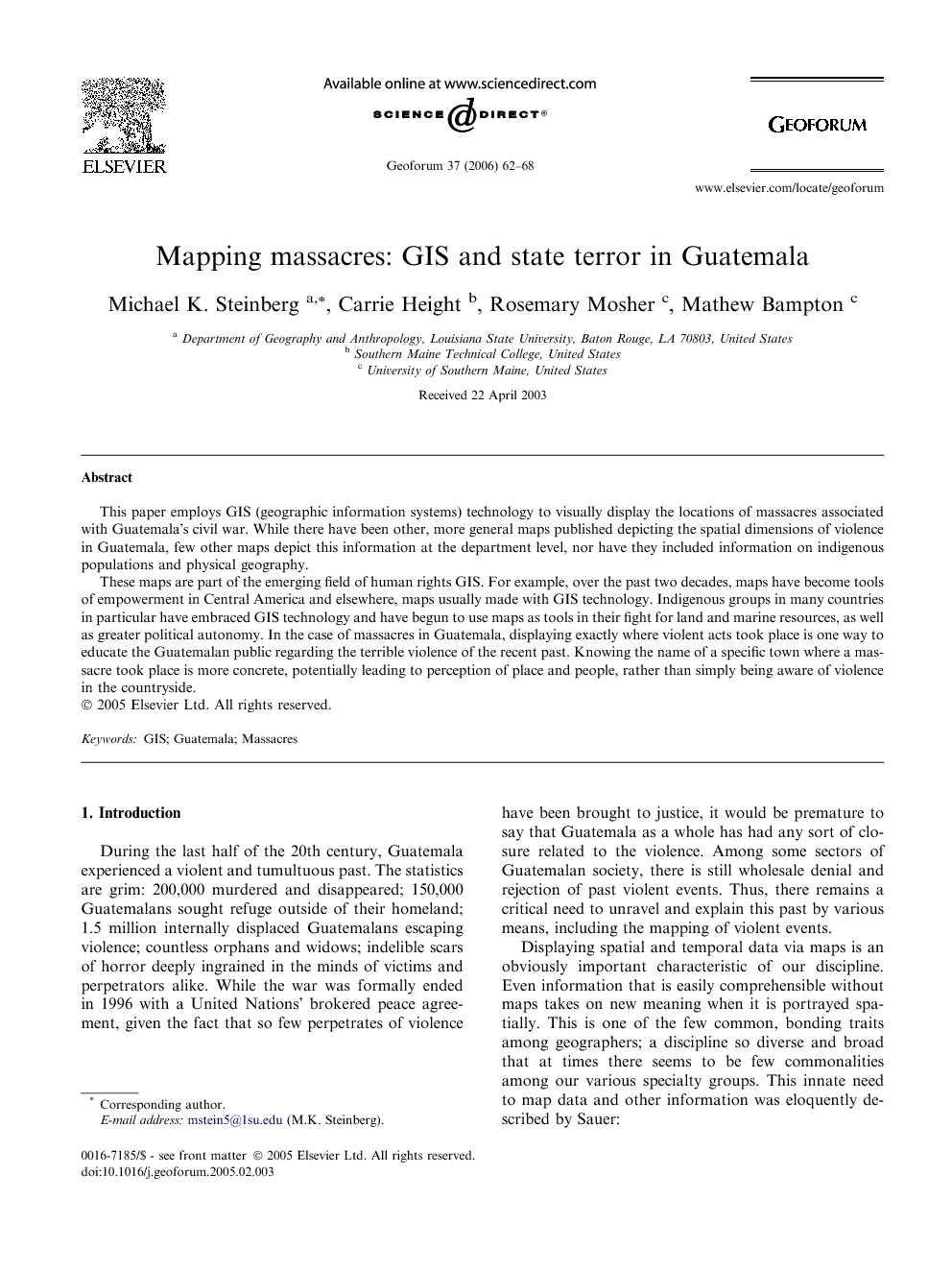 This paper employs GIS (geographic information systems) technology to visually display the locations of massacres associated with Guatemala’s civil war. While there have been other, more general maps published depicting the spatial dimensions of violence in Guatemala, few other maps depict this information at the department level, nor have they included information on indigenous populations and physical geography. These maps are part of the emerging field of human rights GIS. For example, over the past two decades, maps have become tools of empowerment in Central America and elsewhere, maps usually made with GIS technology. Indigenous groups in many countries in particular have embraced GIS technology and have begun to use maps as tools in their fight for land and marine resources, as well as greater political autonomy. In the case of massacres in Guatemala, displaying exactly where violent acts took place is one way to educate the Guatemalan public regarding the terrible violence of the recent past. Knowing the name of a specific town where a massacre took place is more concrete, potentially leading to perception of place and people, rather than simply being aware of violence in the countryside.

This most recent phase of violence in Guatemala is unfortunately a continuation of centuries of violence that targeted the lands, souls, and bodies of the indigenous Maya. While Guatemala has had some periods of peace, violence has flared up time and time again over the past 500 years, especially in indigenous landscapes. This violence has usually been initiated (directly and indirectly) by outside cultural forces: the Spanish, the Guatemalan elites, and the US government. Mapping the locations of political violence is an important step in more deeply understanding where and why violence took place in Guatemala from the late 1970s to the mid-1990s. Massacres were not random acts. Instead, the vast majority of massacres and violent acts in general took place in indigenous Maya landscapes where the military set out to intimidate and displace the rural population—motivated by various factors including desire for land and resources, deep distrust and hatred of the Maya by elites, and fear that the rural population would unite in a revolt against the military state. The violence also had a specific military/strategic purpose. After the initial wave of severe violence in the early 1980s, the rebel’s rural base of support was either obliterated or intimidated by the violence. Therefore this violence was effective from a military standpoint. By the mid-1980s, the rebels no longer represented a credible military threat based on numbers of combatants, military hardware, or rural support. The military had accomplished its goals of isolating the rebel forces from their most likely allies—the Maya living in rural Guatemala—by destroying individuals and entire communities who lent support (even perceived support) to their cause. It is hoped that these and future maps will contribute to the growing body of information that documents specific locations of past violence. This, in turn, may be used as evidence against the perpetrators of such violence. While geographers have not been as deeply involved in human rights-related fieldwork as some disciplines such as forensic anthropology, we can make a significant contribution to this field by deconstructing the spatial dimensions of conflict and violence.