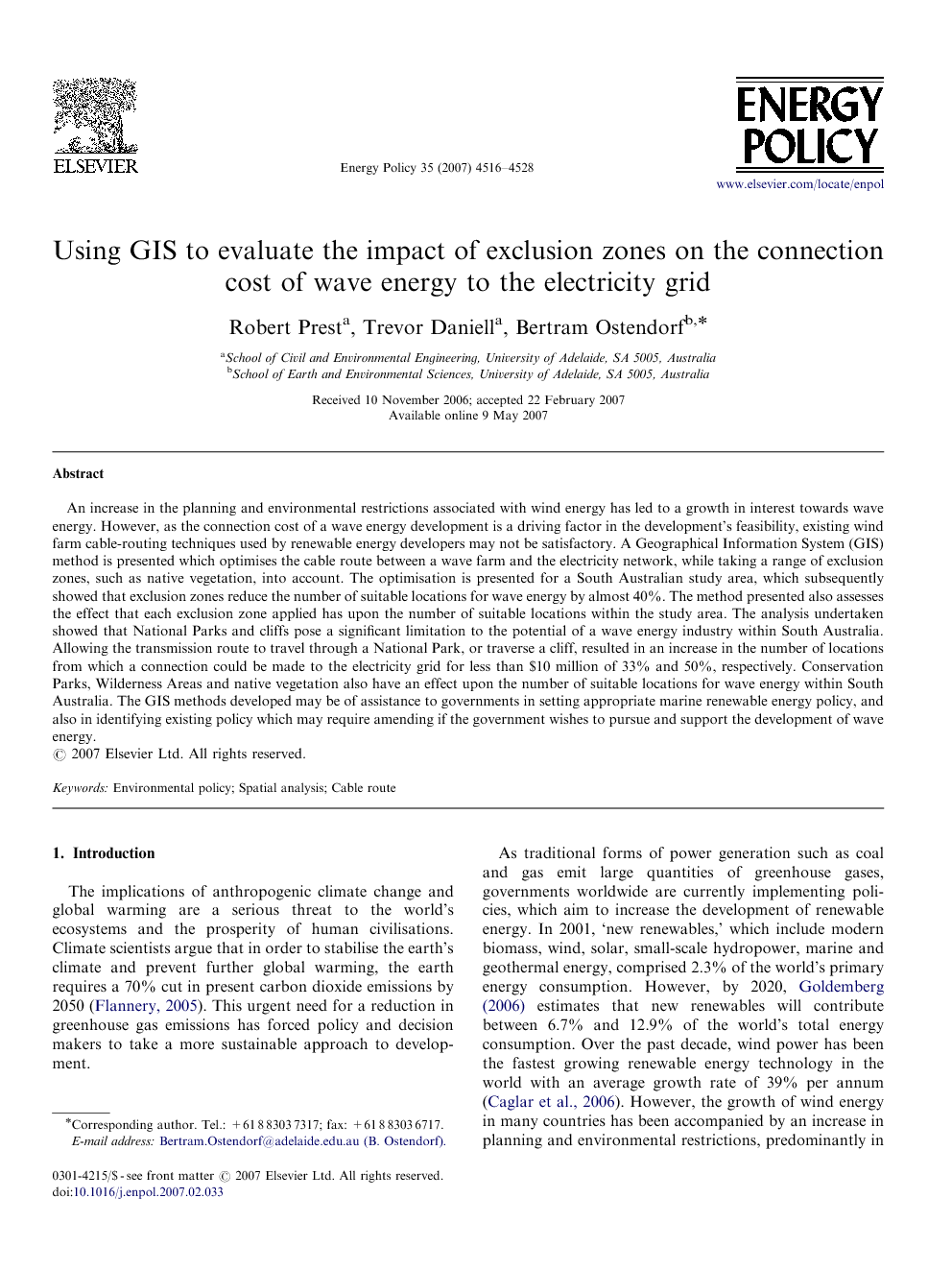 An increase in the planning and environmental restrictions associated with wind energy has led to a growth in interest towards wave energy. However, as the connection cost of a wave energy development is a driving factor in the development's feasibility, existing wind farm cable-routing techniques used by renewable energy developers may not be satisfactory. A Geographical Information System (GIS) method is presented which optimises the cable route between a wave farm and the electricity network, while taking a range of exclusion zones, such as native vegetation, into account. The optimisation is presented for a South Australian study area, which subsequently showed that exclusion zones reduce the number of suitable locations for wave energy by almost 40%. The method presented also assesses the effect that each exclusion zone applied has upon the number of suitable locations within the study area. The analysis undertaken showed that National Parks and cliffs pose a significant limitation to the potential of a wave energy industry within South Australia. Allowing the transmission route to travel through a National Park, or traverse a cliff, resulted in an increase in the number of locations from which a connection could be made to the electricity grid for less than $10 million of 33% and 50%, respectively. Conservation Parks, Wilderness Areas and native vegetation also have an effect upon the number of suitable locations for wave energy within South Australia. The GIS methods developed may be of assistance to governments in setting appropriate marine renewable energy policy, and also in identifying existing policy which may require amending if the government wishes to pursue and support the development of wave energy.

A clear and concise GIS method was presented to assist in the optimisation of a transmission route between a wave farm and the electricity network. The GIS method has considerable advantages over traditional methods such as assessing a range of maps individually and delineating a transmission route by hand, and therefore may be of valuable use to renewable energy developers. The effect which certain exclusion zones had upon the wave energy potential of South Australia was assessed. The baseline cases showed that exclusion zones will have a significant effect upon the development of wave energy in South Australia. Within the analysis area specified, exclusion zones reduced the number of cells which could be connected to the electricity network for less than $30 million by 40%. The most attractive locations, in terms of connection cost, were reduced by over 60% by exclusion zones. This suggests that the rather large impact of the exclusion zones may reduce the potential of a wave energy industry in South Australia. An analysis was undertaken which simulated the effect of the government relaxing development restrictions on each exclusion zone would have upon possible locations for a wave energy farm in South Australia. The analysis showed that restricting the construction of a transmission route through National Parks, and the construction issues involved in the transmission route traversing a large cliff, pose the most significant limitations to the potential of a wave energy industry within South Australia. Enabling construction of a transmission route through National Parks increased the number of cells which could be connected for less than $30 million by 33%, and when considering the most attractive locations in which a connection could be made for less than $10 million, this figure increased to over 40%. Allowing the cable to traverse either a Conservation Park, Wilderness Area or native vegetation increased the number of potential locations for wave energy in South Australia by between 6% and 9%. Quite significantly, if the transmission cable can be constructed to negotiate a 50 m cliff, the number of locations which could be connected for less than $10 million increased by nearly 50%. A wave energy industry is unlikely to develop within South Australia in the short term. This is predominantly due to the Australian Federal Government's continual lack of support for renewable energy, including failing to extend the Mandatory Renewable Energy Target (MRET) beyond 2% (Kent and Mercer, 2006). However, the method presented to assess the effect which certain exclusion zones have upon the wave energy potential of a specified area, may be of use to governments worldwide who are keen to implement policies which aim to increase the development of marine energy. The method has the capacity to evaluate suitable areas for the development of wave energy, which may be of assistance in setting appropriate marine renewable energy policy. The method also enabled an assessment to be made on the effect which different exclusion zones have upon the amount of suitable locations for wave energy, which could assist governments in identifying existing policy that they may wish to amend in order to pursue the growth of wave energy within their jurisdiction. This infers a possible trade off between environmental designations such as biodiversity consideration and greenhouse gas reduction, in which a decision needs to be made by policy makers on which is more important.