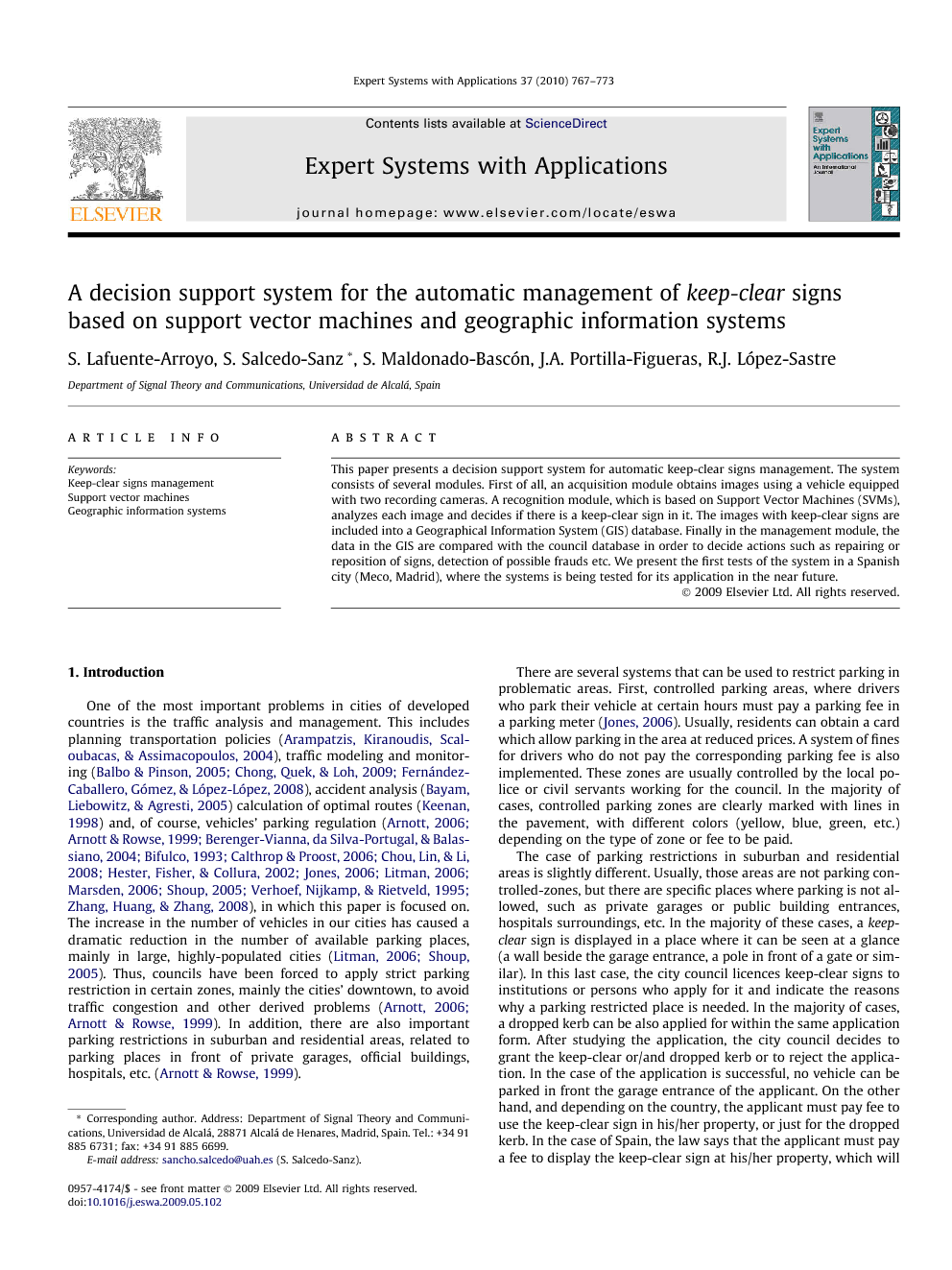 This paper presents a decision support system for automatic keep-clear signs management. The system consists of several modules. First of all, an acquisition module obtains images using a vehicle equipped with two recording cameras. A recognition module, which is based on Support Vector Machines (SVMs), analyzes each image and decides if there is a keep-clear sign in it. The images with keep-clear signs are included into a Geographical Information System (GIS) database. Finally in the management module, the data in the GIS are compared with the council database in order to decide actions such as repairing or reposition of signs, detection of possible frauds etc. We present the first tests of the system in a Spanish city (Meco, Madrid), where the systems is being tested for its application in the near future.

One of the most important problems in cities of developed countries is the traffic analysis and management. This includes planning transportation policies (Arampatzis, Kiranoudis, Scaloubacas, & Assimacopoulos, 2004), traffic modeling and monitoring (Balbo and Pinson, 2005, Chong et al., 2009 and Fernández-Caballero et al., 2008), accident analysis (Bayam, Liebowitz, & Agresti, 2005) calculation of optimal routes (Keenan, 1998) and, of course, vehicles’ parking regulation (Arnott, 2006, Arnott and Rowse, 1999, Berenger-Vianna et al., 2004, Bifulco, 1993, Calthrop and Proost, 2006, Chou et al., 2008, Hester et al., 2002, Jones, 2006, Litman, 2006, Marsden, 2006, Shoup, 2005, Verhoef et al., 1995 and Zhang et al., 2008), in which this paper is focused on. The increase in the number of vehicles in our cities has caused a dramatic reduction in the number of available parking places, mainly in large, highly-populated cities (Litman, 2006 and Shoup, 2005). Thus, councils have been forced to apply strict parking restriction in certain zones, mainly the cities’ downtown, to avoid traffic congestion and other derived problems (Arnott, 2006 and Arnott and Rowse, 1999). In addition, there are also important parking restrictions in suburban and residential areas, related to parking places in front of private garages, official buildings, hospitals, etc. (Arnott & Rowse, 1999). There are several systems that can be used to restrict parking in problematic areas. First, controlled parking areas, where drivers who park their vehicle at certain hours must pay a parking fee in a parking meter (Jones, 2006). Usually, residents can obtain a card which allow parking in the area at reduced prices. A system of fines for drivers who do not pay the corresponding parking fee is also implemented. These zones are usually controlled by the local police or civil servants working for the council. In the majority of cases, controlled parking zones are clearly marked with lines in the pavement, with different colors (yellow, blue, green, etc.) depending on the type of zone or fee to be paid. The case of parking restrictions in suburban and residential areas is slightly different. Usually, those areas are not parking controlled-zones, but there are specific places where parking is not allowed, such as private garages or public building entrances, hospitals surroundings, etc. In the majority of these cases, a keep-clear sign is displayed in a place where it can be seen at a glance (a wall beside the garage entrance, a pole in front of a gate or similar). In this last case, the city council licences keep-clear signs to institutions or persons who apply for it and indicate the reasons why a parking restricted place is needed. In the majority of cases, a dropped kerb can be also applied for within the same application form. After studying the application, the city council decides to grant the keep-clear or/and dropped kerb or to reject the application. In the case of the application is successful, no vehicle can be parked in front the garage entrance of the applicant. On the other hand, and depending on the country, the applicant must pay fee to use the keep-clear sign in his/her property, or just for the dropped kerb. In the case of Spain, the law says that the applicant must pay a fee to display the keep-clear sign at his/her property, which will prevent other drivers to park in front of the entrance. This situation is, however, different in other Europeans countries such as United Kingdom for example, where the fee is paid, in the majority of cases, only for the dropped kerb, not for the keep-clear sign. In general each country has a different legislation on parking, but in many cases the problems are similar in all them. The keep-clear sign system implemented in Spain is easy and valuable both for citizens, who are protected against vehicles which block access to their properties, and also for the city council, which obtains a very good economical profit out of it. The main problem with it is that, in the majority of cases, is the council who must manage the signs once they have been granted to citizens. After some years of use, the marks may be deteriorated, broken or simple missing due to vandalism, and it is the council who must control and repair these signs as they are part (and therefore equivalent to) road signs. In large cities, with hundreds or thousand of keep-clear signs spread out in the suburban area, this could be a formidable (and, in addition, very expensive) task. In this paper, we present a decision support system (DSS) for the management of keep-clear signs, based on a robust Support Vector Machine (SVM) module (Hearst et al., 1998 and Maldonado-Bascón et al., 2007) and a Geographical Information System (GIS) (Arampatzis et al., 2004 and Keenan, 1998). The system is based on a detection and recognition tool which uses SVMs (Maldonado-Bascón et al., 2007) as the automatic recognition part of the system. The whole system includes a process to obtain images of houses from a vehicle, using two synchronized cameras. These images are processed using SVMs in order to locate possible keep-clear signs. After the recognition part by the SVMs, a database with GIS is compared with the database of the council, and the results show possible problematic points of actuation, in which human intervention must be required in order to repair or repose signs. The system can be also used to discover false keep-clear signs or infractions related to existing but non-paid signs. This paper discusses a case of real application in a Spanish city (Meco, Madrid), where the system is being tested for real implementation. The rest of the paper has the following structure: in the next section we describe in detail the proposed system. The subsystems of image acquisition and sign recognition are specially treated and described. The actions for sign management derived from the system are also discussed. In Section 3 we show a real application of the system in Meco, a city in Madrid, with 10,000 inhabitants, where the system is being tested. Finally, Section 4 closes the paper summarizing the main conclusions of the work.

This paper presents a novel decision support system for the management of keep-clear signs. The core of the system is a recording subsystem, mounted over a vehicle equipped with two cameras, and a recognition subsystem formed by a support vector machine, which performs the analysis of images to locate keep-clear signs on them. The results of this process is included in a database with a geographic information system (GIS), to visualize the information. The GIS database offers the possibility of comparison with an alternative database of a client, a council in the majority of cases, which highly automates keep-clear management process. The paper presents some results of the system in operation, specifically the recording and recognition subsystems in a route in city of Meco, in Madrid, Spain.