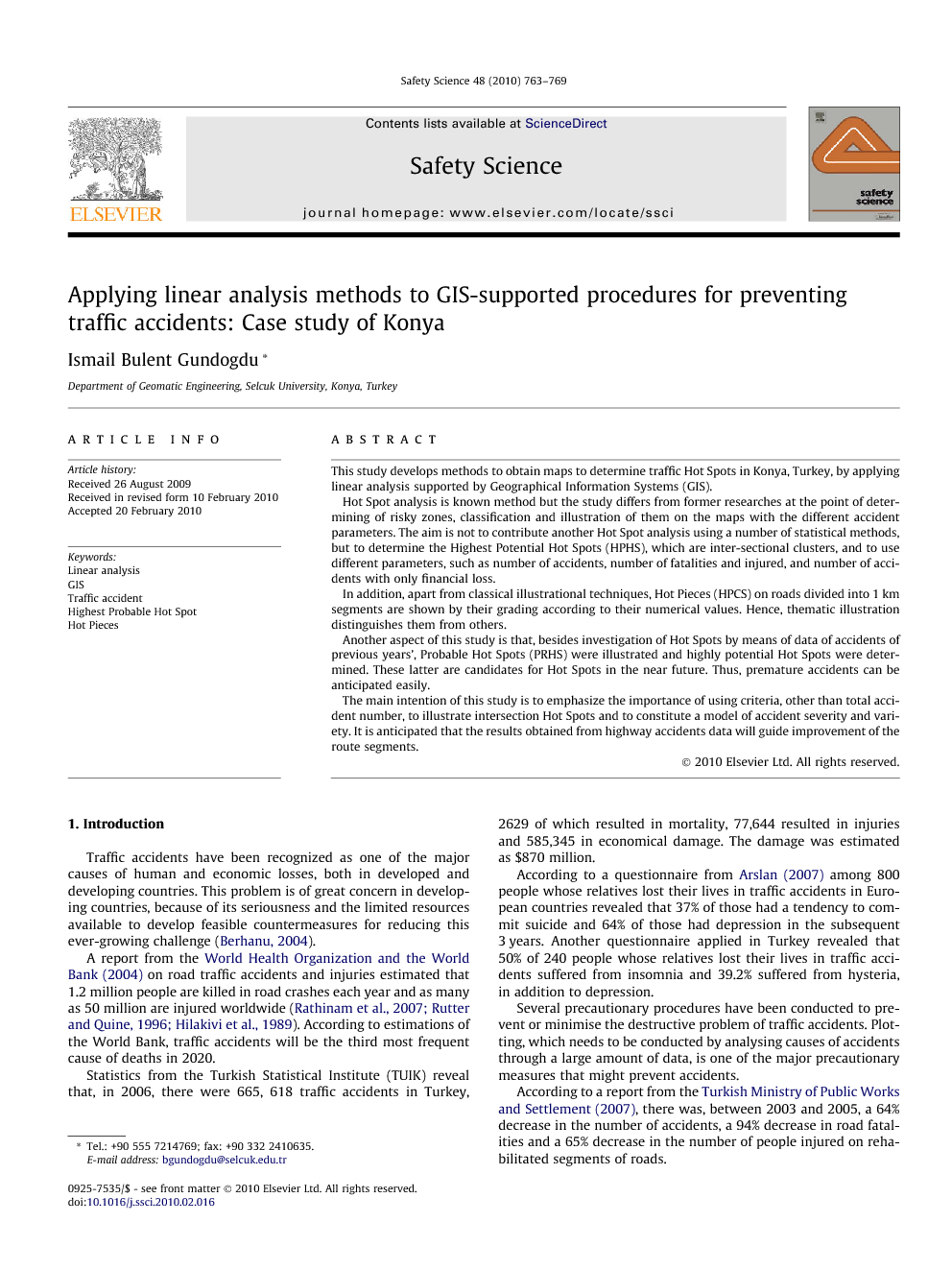 This study develops methods to obtain maps to determine traffic Hot Spots in Konya, Turkey, by applying linear analysis supported by Geographical Information Systems (GIS). Hot Spot analysis is known method but the study differs from former researches at the point of determining of risky zones, classification and illustration of them on the maps with the different accident parameters. The aim is not to contribute another Hot Spot analysis using a number of statistical methods, but to determine the Highest Potential Hot Spots (HPHS), which are inter-sectional clusters, and to use different parameters, such as number of accidents, number of fatalities and injured, and number of accidents with only financial loss. In addition, apart from classical illustrational techniques, Hot Pieces (HPCS) on roads divided into 1 km segments are shown by their grading according to their numerical values. Hence, thematic illustration distinguishes them from others. Another aspect of this study is that, besides investigation of Hot Spots by means of data of accidents of previous years’, Probable Hot Spots (PRHS) were illustrated and highly potential Hot Spots were determined. These latter are candidates for Hot Spots in the near future. Thus, premature accidents can be anticipated easily. The main intention of this study is to emphasize the importance of using criteria, other than total accident number, to illustrate intersection Hot Spots and to constitute a model of accident severity and variety. It is anticipated that the results obtained from highway accidents data will guide improvement of the route segments.

Interpretation of results on a map is one of the fundamental guides. In this study, the map user is supplied with different visualizations of linear analysis illustrated with different techniques. As a consequence of the application, however the hotspots have been evaluated by the number of accidents so far, studying with only accident numbers and mapping of them alone are not sufficient. Thematic maps show graduated accident parameters are the most important products for the study. It is important to determine which types of traffic accidents occur at which segments. The maps show the user not only kilometre values of accident points but also hazardous road segments. The number of people killed or injured, and the number of accidents with only financial damage, must be taken as information clusters individually and then HPHSs must be assessed through inter-sectional clusters of individual information clusters. When route maps producing different criteria are investigated, as seen in Fig. 2a–d, Hot Spots appear at different points on the same routes. For instance, Hot Spots determined by mortality criteria are seen on straight routes because of the high speed on those sections. If there were an accident on this route, someone would normally be killed. Although the number of accidents with injuries is fewer than mortalities, the factors are more or less the same. Maps of damage Hot Spots show them appearing on international roads, which attract expensive vehicles. There is less mortality but more injured people and more accidental damage on international roads. These facts may give an idea about using goals and type of the routes and kinds of vehicles. However, the idea is not acceptable for the entire route. Nevertheless, the method should be applicable in other similar road networks especially using different accident parameters and considering all segments of roads. In pieces maps, some segments do not have any Hot Spots, but some segments meet all the criteria. In this case, Highest Potential Hot Spots, which are determined by the intersection of all criteria must be considered first. Hot Spot maps producing different criteria are the most important tools for road improvement. When we consider that the place where the accident happened is recorded with 1 km proximity, and the factors affecting the accident do not start just at the accident point, it is obvious that analysis of HPCS is critical. Table 1 shows the number of Hot Spots and priority status for all points, as another useful result for improving route planning.When the results of the study compared with existing accident data, some useful suggestions can be mentioned. HPHS and PRHS numbers and locations which are determined by this method are different from normal Hot Spot numbers or locations. Naturally priorities of precaution types will be various at different points or road segments. It can be seen that 22 high-potential Hot Spots could be real Hot Spots in the near future. These segments ought to be dealt with as a priority, in terms of preventative measures. All dangerous zones and the severity of accidents at the point of different criteria can be shown numerically from Table 1. So, both values and kilometres from maps must be used to improve current routes and planning new routes. The priority of the plan is reduction of mortality. It is also structurally problematic segments or points on routes that can be determined easily with the help of result values and terrestrial research. As an example, although route 5 does not have any Hot Spots determined for damage, it has the most number of deaths, since it is so straight and crowded. Investigating the dangerous spots and the road segments illustrated in the analysis maps prepared here, studying the contributory factors and taking precautions are the responsibility of the related administration.