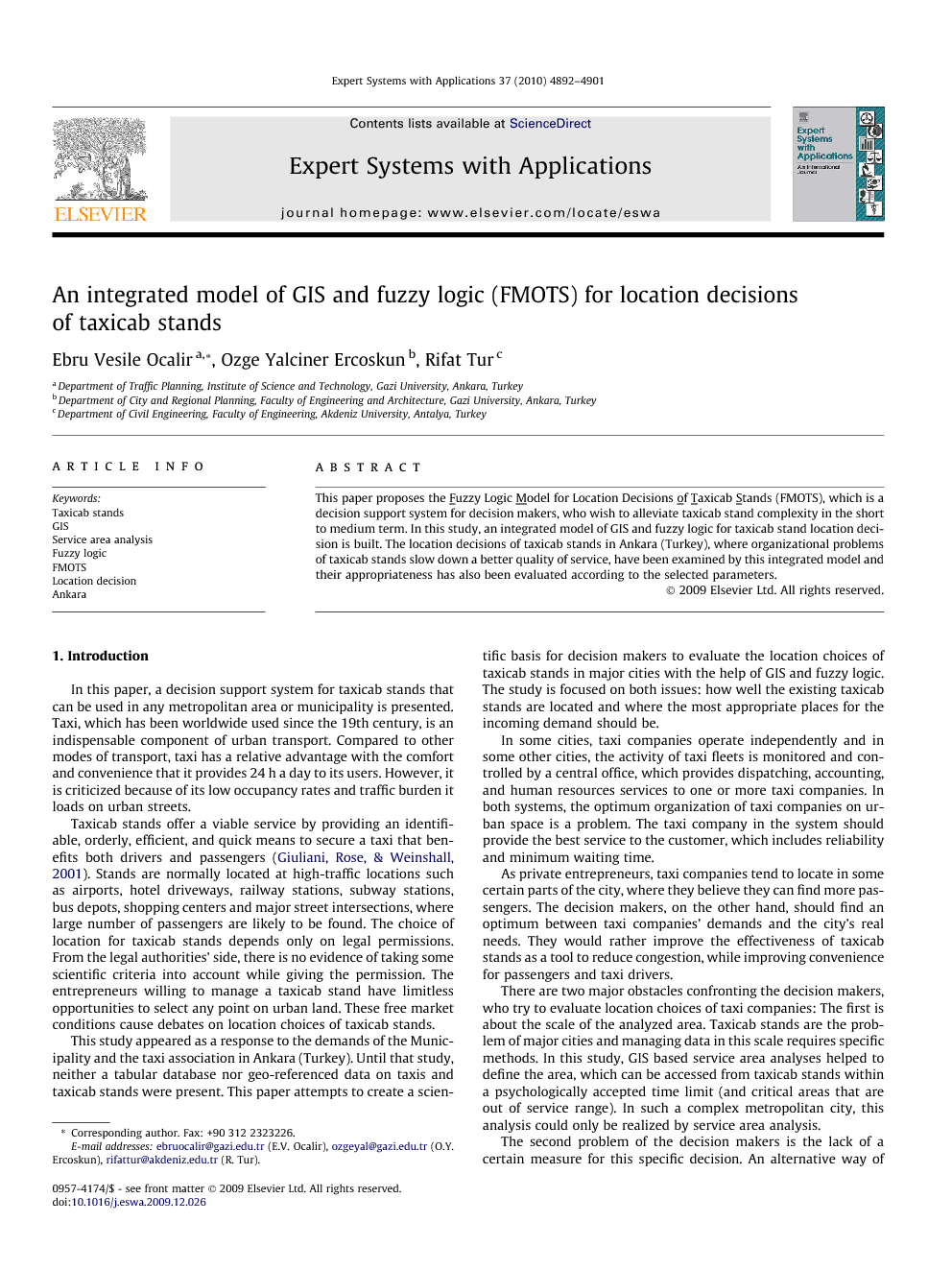 This paper proposes the Fuzzy Logic Model for Location Decisions of Taxicab Stands (FMOTS), which is a decision support system for decision makers, who wish to alleviate taxicab stand complexity in the short to medium term. In this study, an integrated model of GIS and fuzzy logic for taxicab stand location decision is built. The location decisions of taxicab stands in Ankara (Turkey), where organizational problems of taxicab stands slow down a better quality of service, have been examined by this integrated model and their appropriateness has also been evaluated according to the selected parameters.

In this paper, a decision support system for taxicab stands that can be used in any metropolitan area or municipality is presented. Taxi, which has been worldwide used since the 19th century, is an indispensable component of urban transport. Compared to other modes of transport, taxi has a relative advantage with the comfort and convenience that it provides 24 h a day to its users. However, it is criticized because of its low occupancy rates and traffic burden it loads on urban streets. Taxicab stands offer a viable service by providing an identifiable, orderly, efficient, and quick means to secure a taxi that benefits both drivers and passengers (Giuliani, Rose, & Weinshall, 2001). Stands are normally located at high-traffic locations such as airports, hotel driveways, railway stations, subway stations, bus depots, shopping centers and major street intersections, where large number of passengers are likely to be found. The choice of location for taxicab stands depends only on legal permissions. From the legal authorities’ side, there is no evidence of taking some scientific criteria into account while giving the permission. The entrepreneurs willing to manage a taxicab stand have limitless opportunities to select any point on urban land. These free market conditions cause debates on location choices of taxicab stands. This study appeared as a response to the demands of the Municipality and the taxi association in Ankara (Turkey). Until that study, neither a tabular database nor geo-referenced data on taxis and taxicab stands were present. This paper attempts to create a scientific basis for decision makers to evaluate the location choices of taxicab stands in major cities with the help of GIS and fuzzy logic. The study is focused on both issues: how well the existing taxicab stands are located and where the most appropriate places for the incoming demand should be. In some cities, taxi companies operate independently and in some other cities, the activity of taxi fleets is monitored and controlled by a central office, which provides dispatching, accounting, and human resources services to one or more taxi companies. In both systems, the optimum organization of taxi companies on urban space is a problem. The taxi company in the system should provide the best service to the customer, which includes reliability and minimum waiting time. As private entrepreneurs, taxi companies tend to locate in some certain parts of the city, where they believe they can find more passengers. The decision makers, on the other hand, should find an optimum between taxi companies’ demands and the city’s real needs. They would rather improve the effectiveness of taxicab stands as a tool to reduce congestion, while improving convenience for passengers and taxi drivers. There are two major obstacles confronting the decision makers, who try to evaluate location choices of taxi companies: The first is about the scale of the analyzed area. Taxicab stands are the problem of major cities and managing data in this scale requires specific methods. In this study, GIS based service area analyses helped to define the area, which can be accessed from taxicab stands within a psychologically accepted time limit (and critical areas that are out of service range). In such a complex metropolitan city, this analysis could only be realized by service area analysis. The second problem of the decision makers is the lack of a certain measure for this specific decision. An alternative way of thinking, which allows modeling complex systems using a higher level of abstraction originating from our knowledge and experience, is necessary. Fuzzy logic is an organized and mathematical method of handling inherently imprecise concepts. It has proven to be an excellent choice for many control system applications since it mimics human control logic. It uses an imprecise but very descriptive language to deal with input data more like a human operator. In this study, an integrated model of GIS and fuzzy logic for taxicab stand location decision is built. GIS were used for generating some of the major inputs for the fuzzy logic model. The location decisions of taxicab stands in Ankara, where organizational problems of taxicab stands slow down a better quality of service, have been examined by this integrated model and their appropriateness has also been evaluated according to the selected parameters. With the fuzzy logic application, evaluation of the existing taxicab stands is done and decision for new taxicab stands is given. The equations are obtained by artificial neural network (ANN) approach to predict the number of taxicab stands in each traffic zone. In the next section, background information for the tools used (the integration of GIS and fuzzy logic) is provided. It is followed by the introduction of a decision support system, the Fuzzy Logic Model for Location Decisions of Taxicab Stands (FMOTS), which was developed in this study, with a case study in Ankara. The paper closes with conclusions.

In this study, an integrated model of GIS and fuzzy logic, FMOTS, for taxicab stand location decision is developed. The model is based on fuzzy logic approach, which uses GIS outputs as inputs and field studies are carried out before the development of the FMOTS model. The following results are drawn from the study: 1. A fuzzy logic model for location decisions of taxicab stands in big cities is developed. The model brings an alternative and flexible way of thinking in the problem of a complex set of parameters by integrating a GIS study and fuzzy logic. 2. In this study equations to predict the number of taxicab stands in each traffic zone are obtained by artificial neural network (ANN) approach. 3. The model is created as a response to the needs of the Ankara Municipality and the Taxi Association of Ankara. FMOTS gives some results to evaluate the necessary number of taxicab stands in traffic zone level, which are consistent with the observations of the planners. 4. Within the context of the study, for the first time a geo-database of the taxicab stands in Ankara with their addresses and coordinates was created. 5. The scale of the analyzed area requires specific methods to compute the data, such as the areas which do not have adequate taxi service. GIS based service area analyses helped to define the area, which can be accessed from taxicab stands within a psychologically accepted time limit (and critical areas that are out of service range). The obtained data were useful in fuzzy operations. 6. The study brings some innovation by implementing fuzzy logic to a transport problem for an area based analysis, different from the others that focus on networks and queuing theory. 7. FMOTS addresses many of the inherent weaknesses of current systems by implementing: (a) fuzzy set membership as a method for representing the performance of decision alternatives on evaluation criteria, (b) fuzzy methods for both parameter weighting and capturing geographic preferences, and (c) a fuzzy object oriented spatial database for feature storage. These make it possible to both store and represent query results more precisely. The end result of all of these enhancements is to provide spatial decision makers with more information so that their decisions will be more accurate. 8. The location decisions of taxicab stands in Ankara have been examined by this integrated model and their appropriateness has been evaluated according to the selected parameters. 9. FMOTS was developed for the needs of Ankara but it can be used in any metropolitan city and municipality. The proposed fuzzy logic model is indeed a decision support system for decision makers, who wish to alleviate taxicab stand complexity in the short to medium term. Taxi and its control systems can make use of the vague information derived from the natural environment that in turn can be fed into expert systems and so provide accurate recommendations to taxi drivers, the customers, motoring organizations and local authorities. Broad future research can be suggested with the study. The methodology employed in the research shows the potential to be applicable to other transport related services, such as the location choices of large parking garages. The effect on such systems will give planners and traffic authorities some breathing space when considering long-term objectives and likely solutions.