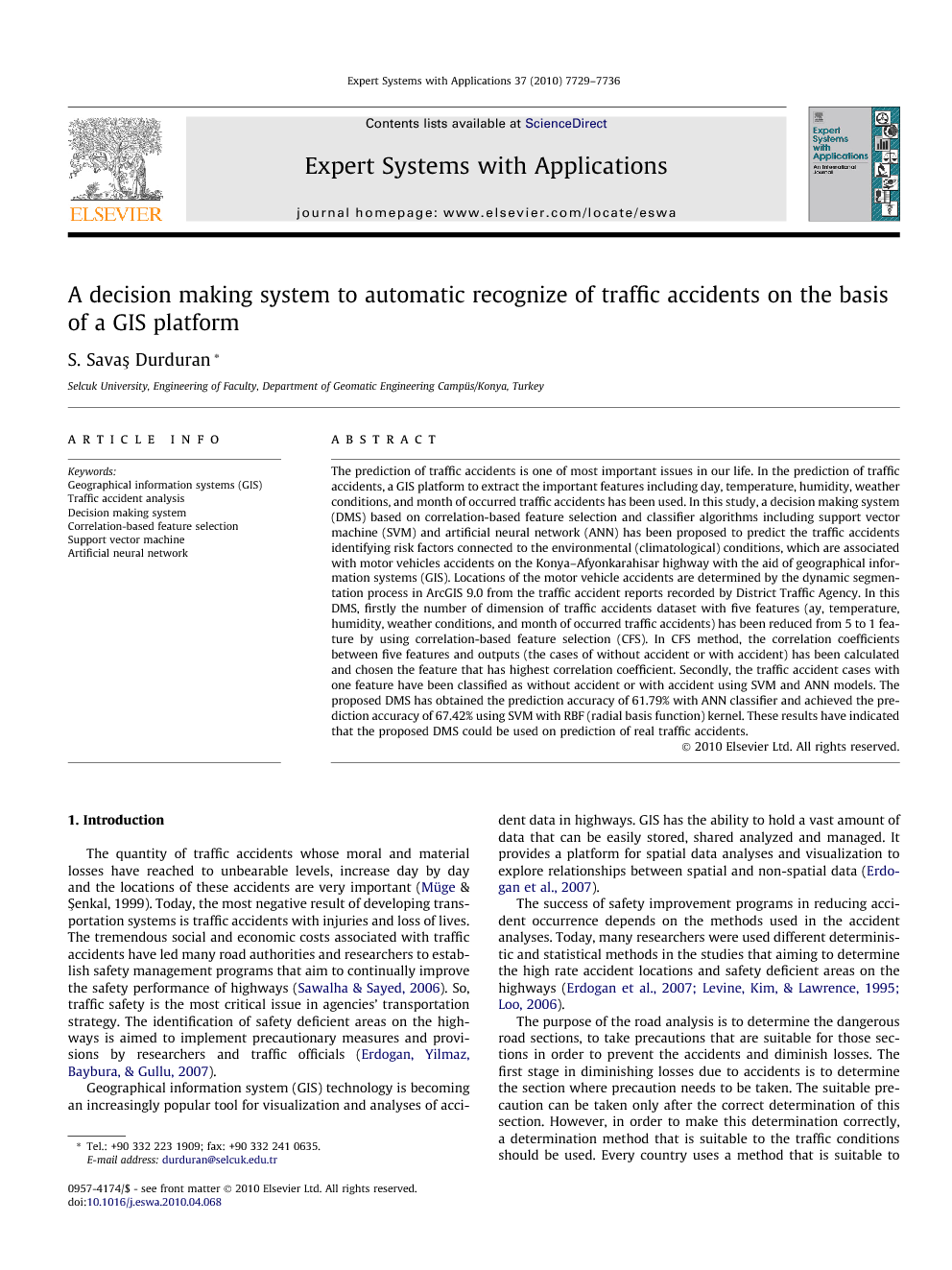 The quantity of traffic accidents whose moral and material losses have reached to unbearable levels, increase day by day and the locations of these accidents are very important (Müge & Şenkal, 1999). Today, the most negative result of developing transportation systems is traffic accidents with injuries and loss of lives. The tremendous social and economic costs associated with traffic accidents have led many road authorities and researchers to establish safety management programs that aim to continually improve the safety performance of highways (Sawalha & Sayed, 2006). So, traffic safety is the most critical issue in agencies’ transportation strategy. The identification of safety deficient areas on the highways is aimed to implement precautionary measures and provisions by researchers and traffic officials (Erdogan, Yilmaz, Baybura, & Gullu, 2007). Geographical information system (GIS) technology is becoming an increasingly popular tool for visualization and analyses of accident data in highways. GIS has the ability to hold a vast amount of data that can be easily stored, shared analyzed and managed. It provides a platform for spatial data analyses and visualization to explore relationships between spatial and non-spatial data (Erdogan et al., 2007). The success of safety improvement programs in reducing accident occurrence depends on the methods used in the accident analyses. Today, many researchers were used different deterministic and statistical methods in the studies that aiming to determine the high rate accident locations and safety deficient areas on the highways (Erdogan et al., 2007, Levine et al., 1995 and Loo, 2006). The purpose of the road analysis is to determine the dangerous road sections, to take precautions that are suitable for those sections in order to prevent the accidents and diminish losses. The first stage in diminishing losses due to accidents is to determine the section where precaution needs to be taken. The suitable precaution can be taken only after the correct determination of this section. However, in order to make this determination correctly, a determination method that is suitable to the traffic conditions should be used. Every country uses a method that is suitable to itself in order to determine the dangerous sections (Müge & Şenkal, 1999). Many of these researches have explored the relationships between traffic accidents and geometric design and operation of road segments. However, data relating to accidents are widely available, but have received surprisingly little analyses with respect to weather. The complexity involved in establishing the exact cause-and-effect relationship in traffic accidents acts as an obstacle, because road accidents are the results of an intricate driver–vehicle–environment matrix (Andreescu & Frost, 1998). So, it is aimed to decrease the accidents determining the effects of weather and some environmental conditions on traffic accidents in Konya–Afyonkarahisar highway with the aid of GIS and artificial intelligence. A novel decision making system based on correlation-based feature selection and classification algorithms including support vector machine and artificial neural network for predicting the traffic accidents Konya–Afyonkarahisar highway in Turkey with the aid of GIS. The used traffic accidents dataset comprises five features including day, temperature, humidity, weather conditions, and month of occurred traffic accidents and comprises 378 data points (179 without traffic accident and 179 with traffic accident). In order to select the significant feature from dataset and to reduce the complexity of classification algorithms, the correlation-based feature selection method has been applied to traffic accidents dataset and selected the first feature of dataset that is most related to class cases of traffic accidents dataset in the end of this process. After feature selection process, the traffic accidents dataset with one feature (day attribute) has been assigned to either without accidents or with accident via SVM or ANN classifiers. Thanks to this decision making system, the case of traffic accident according to obtained information from a GIS could be determined. The rest of the paper is arranged as follows. The material is described in the next section. Section 3 presents the proposed decision making system. The experimental data and results to present the effectiveness of proposed method are given in Section 4. The conducted conclusions and discussions are given in Section 5.

Using the geographical information system is useful in displaying of the accident locations on the map. At the same time, because of the loss of lives and large amount of money, the researches aiming to prevent the traffic accidents are very popular in developing countries. In this situation, it is very important to forecast the probability of the occurrence of accidents according to the weather conditions for implementing proper precautionary measures in traffic safety studies. Although the study has low accuracy values, use of different artificial intelligence methods with the increase of accidental data warehouse will improve the accuracy of the decision support system. To perform this situation, a novel decision making system has been proposed and applied to prediction of a real traffic accidents on the Konya–Afyonkarahisar highway in Turkey. The proposed method comprised two stages comprising of correlation-based feature selection and classification algorithms including SVM and ANN models. The proposed method has obtained better results than that of alone SVM and ANN models and exhibited the applicability to prediction of traffic accidents. So, it is aimed to obtain more reliable results for the system with collecting more accident data, according to the weather and environment conditions as future work.