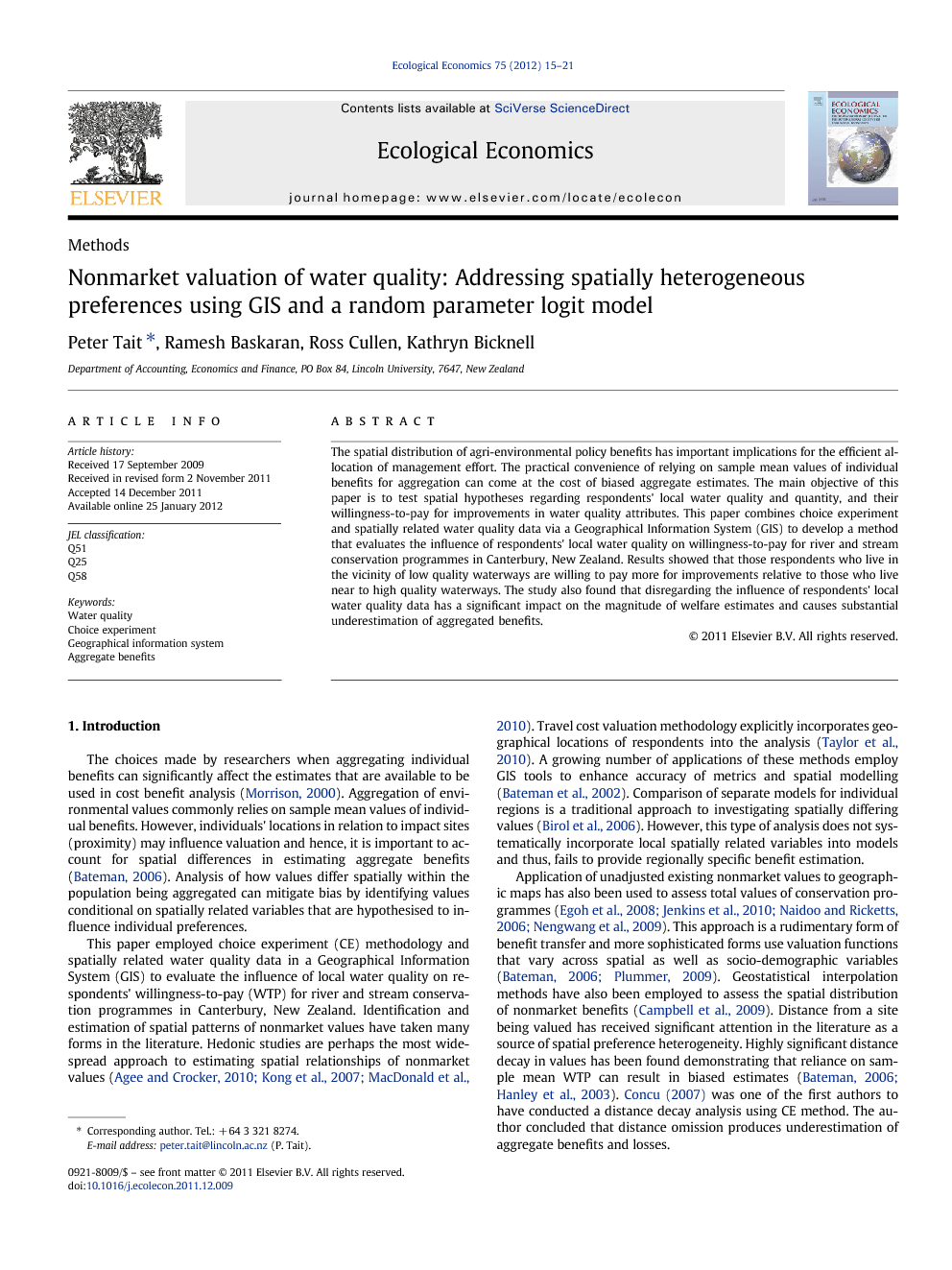 The spatial distribution of agri-environmental policy benefits has important implications for the efficient allocation of management effort. The practical convenience of relying on sample mean values of individual benefits for aggregation can come at the cost of biased aggregate estimates. The main objective of this paper is to test spatial hypotheses regarding respondents' local water quality and quantity, and their willingness-to-pay for improvements in water quality attributes. This paper combines choice experiment and spatially related water quality data via a Geographical Information System (GIS) to develop a method that evaluates the influence of respondents' local water quality on willingness-to-pay for river and stream conservation programmes in Canterbury, New Zealand. Results showed that those respondents who live in the vicinity of low quality waterways are willing to pay more for improvements relative to those who live near to high quality waterways. The study also found that disregarding the influence of respondents' local water quality data has a significant impact on the magnitude of welfare estimates and causes substantial underestimation of aggregated benefits.

The choices made by researchers when aggregating individual benefits can significantly affect the estimates that are available to be used in cost benefit analysis (Morrison, 2000). Aggregation of environmental values commonly relies on sample mean values of individual benefits. However, individuals' locations in relation to impact sites (proximity) may influence valuation and hence, it is important to account for spatial differences in estimating aggregate benefits (Bateman, 2006). Analysis of how values differ spatially within the population being aggregated can mitigate bias by identifying values conditional on spatially related variables that are hypothesised to influence individual preferences. This paper employed choice experiment (CE) methodology and spatially related water quality data in a Geographical Information System (GIS) to evaluate the influence of local water quality on respondents' willingness-to-pay (WTP) for river and stream conservation programmes in Canterbury, New Zealand. Identification and estimation of spatial patterns of nonmarket values have taken many forms in the literature. Hedonic studies are perhaps the most widespread approach to estimating spatial relationships of nonmarket values (Agee and Crocker, 2010, Kong et al., 2007 and MacDonald et al., 2010). Travel cost valuation methodology explicitly incorporates geographical locations of respondents into the analysis (Taylor et al., 2010). A growing number of applications of these methods employ GIS tools to enhance accuracy of metrics and spatial modelling (Bateman et al., 2002). Comparison of separate models for individual regions is a traditional approach to investigating spatially differing values (Birol et al., 2006). However, this type of analysis does not systematically incorporate local spatially related variables into models and thus, fails to provide regionally specific benefit estimation. Application of unadjusted existing nonmarket values to geographic maps has also been used to assess total values of conservation programmes (Egoh et al., 2008, Jenkins et al., 2010, Naidoo and Ricketts, 2006 and Nengwang et al., 2009). This approach is a rudimentary form of benefit transfer and more sophisticated forms use valuation functions that vary across spatial as well as socio-demographic variables (Bateman, 2006 and Plummer, 2009). Geostatistical interpolation methods have also been employed to assess the spatial distribution of nonmarket benefits (Campbell et al., 2009). Distance from a site being valued has received significant attention in the literature as a source of spatial preference heterogeneity. Highly significant distance decay in values has been found demonstrating that reliance on sample mean WTP can result in biased estimates (Bateman, 2006 and Hanley et al., 2003). Concu (2007) was one of the first authors to have conducted a distance decay analysis using CE method. The author concluded that distance omission produces underestimation of aggregate benefits and losses. Other sources of spatial preference heterogeneity have been identified in a somewhat limited pool of studies outside of the revealed preference and distance decay literature. Brouwer et al. (2010) used CE method to examine spatial preference variability in the valuation of water quality improvements for the Guadalquivir River Basin in the south of Spain. The authors investigate whether respondents' value improvements in their own sub-basin more than three other sub-basins by specifying dummy variables for each of the four sub-basins. Parameters on interactions of these dummy variables with the environmental attributes were estimated. Results indicated that respondents' valued the change of water quality significantly more for their respective sub-basins, but only for the highest level of water quality considered. The authors found that not accounting for spatial preference heterogeneity results in an underestimation of around 30% of the estimated value for the highest water quality level in the whole river basin. In an alternative approach, Condon et al. (2007) examined the influence of respondents' geographical location on values for rural land conservation programmes in Florida. The study used a 20 kilometre (km) radius around respondents and four variables hypothesised to affect individual values which are constructed using a GIS. Results revealed that the share of agricultural land and distance to the coast are statistically significant influences on respondents' values. The authors found that compared to using sample mean values, aggregate values incorporating the respondents' geographic information were approximately 17% and 50% lower for the highest and lowest valued programmes respectively. Comparing this outcome with that of Brouwer et al. (2010) emphasises that the direction of aggregation bias from using sample mean values is not always obvious a priori. This study considered respondents' local water quality conditions as a source of spatial preference heterogeneity in valuing stream and river conservation programmes in Canterbury. While providing specific policy advice to regional water managers, this study also has wider implications. Firstly, this paper contributes to the overall spatial preference heterogeneity literature, where evidence in New Zealand is limited. Secondly, this study provides an application supporting the use of methods that integrate spatial analysis into valuation exercises that enhances welfare estimates.

The results reported in this paper have important policy implications for both agri-environmental policy managers and for choice modelling practitioners. For policy managers, practical application of policies with strict budget constraints inevitably necessitates trade-offs being made. The trade-offs could be based upon aspects of water quality, which rivers and streams are to be targeted, and which one to be chosen first. The results of this study may help to answer these questions. First, recognizing the importance of the selected attributes that require greatest attention can be considered. Based upon the results from this study, Canterbury residents will benefit most by improving the ecological quality, followed by reducing the risk of sickness and finally, by reducing the number of months that a river is in low-flow. Secondly, by showing that further benefit is gained by initially targeting the relatively lower quality rivers and streams. For policy practitioners, by modelling the relationship between the GIS based water quality data applying the method developed in this paper, they will be able to use the estimated values as proxies of benefits to evaluate policy actions across rivers and streams within Canterbury. Implications for choice modelling practitioners stem from the finding that individual welfare is spatially sensitive, and that omission of this facet from aggregate CS calculations may bias results. The primary purpose of this paper was to test spatial hypotheses regarding respondents' local water quality and quantity, and their WTP for improvements in water quality attributes. We found that WTP is sensitive to local water quality. This paper also presented aggregate benefit values that are suitable for cost–benefit analysis. Benefits of combinations of policy outcomes can be assessed using CS estimates. This study found that inclusion of respondents' local water quality data has a significant impact on the magnitude of CS estimates. Aggregate CS estimates that incorporate spatially related water quality data are more than 100% larger than traditional sample mean CS estimates. The main contribution of this paper is the development of a method to incorporate respondents' local water quality data via GIS in estimating WTP and CS for agri-environmental policy. By including respondents' local water quality data, the analyst is able to form a range of estimates dependent on the specific areas of water quality. In short, the spatially distributed WTP estimates for highest (lowest) levels of improvements in water quality attributes are greater (smaller) than the sample average WTP. Therefore, benefit aggregation based on sample average WTP with no spatially distributed water quality information may result in biased estimates. Further research investigating the spatial impact of policies is needed to form a better understanding of how individual benefits relate to the costs of policy implementation. That analysis could also be conducted employing GIS and, combined with spatial WTP data, could aid in identifying where policy is achieving a net benefit.