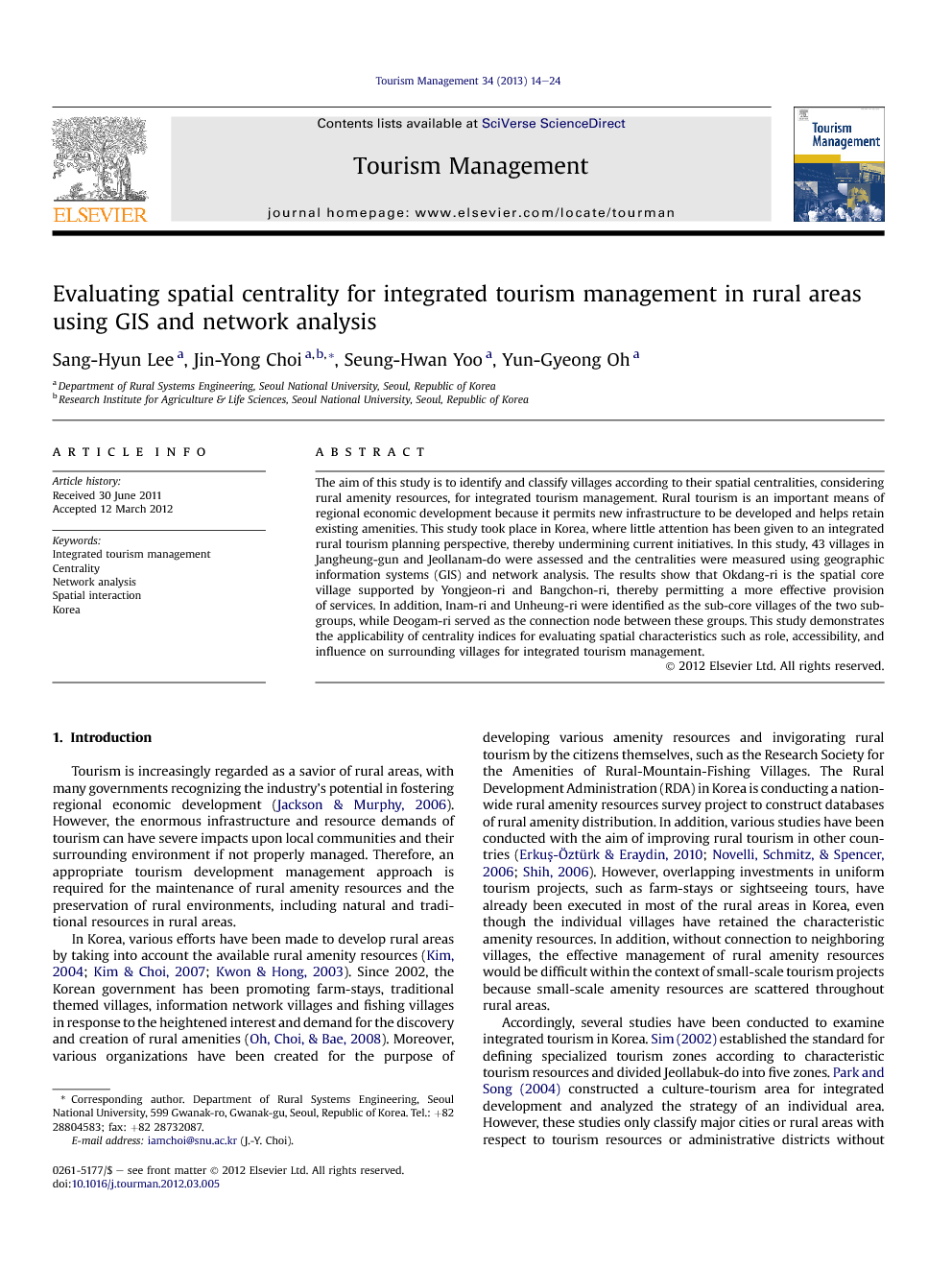 The aim of this study is to identify and classify villages according to their spatial centralities, considering rural amenity resources, for integrated tourism management. Rural tourism is an important means of regional economic development because it permits new infrastructure to be developed and helps retain existing amenities. This study took place in Korea, where little attention has been given to an integrated rural tourism planning perspective, thereby undermining current initiatives. In this study, 43 villages in Jangheung-gun and Jeollanam-do were assessed and the centralities were measured using geographic information systems (GIS) and network analysis. The results show that Okdang-ri is the spatial core village supported by Yongjeon-ri and Bangchon-ri, thereby permitting a more effective provision of services. In addition, Inam-ri and Unheung-ri were identified as the sub-core villages of the two sub-groups, while Deogam-ri served as the connection node between these groups. This study demonstrates the applicability of centrality indices for evaluating spatial characteristics such as role, accessibility, and influence on surrounding villages for integrated tourism management.

Tourism is increasingly regarded as a savior of rural areas, with many governments recognizing the industry's potential in fostering regional economic development (Jackson & Murphy, 2006). However, the enormous infrastructure and resource demands of tourism can have severe impacts upon local communities and their surrounding environment if not properly managed. Therefore, an appropriate tourism development management approach is required for the maintenance of rural amenity resources and the preservation of rural environments, including natural and traditional resources in rural areas. In Korea, various efforts have been made to develop rural areas by taking into account the available rural amenity resources (Kim, 2004; Kim & Choi, 2007; Kwon & Hong, 2003). Since 2002, the Korean government has been promoting farm-stays, traditional themed villages, information network villages and fishing villages in response to the heightened interest and demand for the discovery and creation of rural amenities (Oh, Choi, & Bae, 2008). Moreover, various organizations have been created for the purpose of developing various amenity resources and invigorating rural tourism by the citizens themselves, such as the Research Society for the Amenities of Rural-Mountain-Fishing Villages. The Rural Development Administration (RDA) in Korea is conducting a nation-wide rural amenity resources survey project to construct databases of rural amenity distribution. In addition, various studies have been conducted with the aim of improving rural tourism in other countries (Erkuş-Öztürk & Eraydin, 2010; Novelli, Schmitz, & Spencer, 2006; Shih, 2006). However, overlapping investments in uniform tourism projects, such as farm-stays or sightseeing tours, have already been executed in most of the rural areas in Korea, even though the individual villages have retained the characteristic amenity resources. In addition, without connection to neighboring villages, the effective management of rural amenity resources would be difficult within the context of small-scale tourism projects because small-scale amenity resources are scattered throughout rural areas. Accordingly, several studies have been conducted to examine integrated tourism in Korea. Sim (2002) established the standard for defining specialized tourism zones according to characteristic tourism resources and divided Jeollabuk-do into five zones. Park and Song (2004) constructed a culture-tourism area for integrated development and analyzed the strategy of an individual area. However, these studies only classify major cities or rural areas with respect to tourism resources or administrative districts without considering their relationships with neighboring villages in terms of both rural amenity resources and geographic location. An integrated tourism strategy should be implemented for the effective management of scattered amenity resources and the tourism plan connecting to neighboring villages. In addition, in the case of rural tourism development within many villages, it is important to identify which villages perform the main role for integrated rural tourism and how the main and sub-groups are constituted within several villages. In this study, a spatial index that considers geographic accessibility and the characteristics of rural amenities is evaluated with the application of centrality theory to promote an integrated tourism strategy. The idea of centrality is one of the earliest to be pursued by network analysts (Scott, 2000). Freeman (1979) gave a discussion of actor centrality and network centrality. Wasserman and Faust (1994) presented various centrality measures and referenced the literature on centrality. Numerous measures have been developed, including flow betweenness, the rush index, influence measures and various centralities (e.g., degree, closeness, betweenness, eigenvector, and information centralities) (Borgatti, 2005; Hoede, unpublished manuscript; Hubbell, 1965; Katz, 1953; Taylor, 1969). As centrality implies nodes in a network structure, a centrality that considers both rural amenity resources and the geographic positions of the villages could represent the degree, accessibility, and influence on the other surrounding villages. Accordingly, integrated tourism management that is based on spatial centralities could result in the effective management of scattered amenity resources and the development of connections between neighboring villages. In this study, a geographic information system (GIS) and network analysis were employed to evaluate spatial centralities and classify villages based on their centralities to develop an integrated tourism strategy that considers rural amenity resources. Herein, we illustrate the methodology for spatial network construction and present an evaluation of the degree, betweenness and eigenvector centralities of individual villages, respectively. Furthermore, the core and sub-core villages are identified for integrated tourism using these results. Additionally, the main and sub-group villages are categorized by their eigenvector and degree centrality, and the connecting villages that perform the role of linkage between these groups are evaluated by betweenness centrality.

Rural tourism is an important means of regional economic development because it permits new infrastructure to be devel- oped and helps retain existing amenities. In this study, we analyzed spatial centralities that apply a spatial network and the spatial tourism interaction, which takes into account rural amenity and human resources and the distances between villages. Based on this analysis, we constructed strategies supporting integrated tourism management. An adjacency matrix that considered the shortest paths between all of the villages was fi rst constructed using a geographic information system (GIS) and was applied as the spatial network structure. The spatial tourism interaction was estimated using a spatial tourism interaction model based on a gravity model, which included various tourism factors and was then considered as the weight of the links in the spatial network. The green tourism potential considered the rural amenity and human resource index of the villages, which were regarded as attraction factors, and the shortest distances among villages were used as friction factors. Using network analysis, three centrality indices, namely degree, betweenness, and eigenvector centrality, were evaluated while applying the spatial tourism interaction as the network fl ow to identify the degree, accessibility, and in fl uence each village has on the surrounding villages. This study demonstrates the applicability of centrality indices for evaluating spatial characteristics such as degree, accessibility, and in fl uence on surrounding villages, and it suggests a strategy for integrated rural tourism. The key point of integrated tourism is determining which village is to be the core village and how the villages are to be consolidated. According to the results, the connectivity among northern villages was better than southern villages when we considered the degree and accessibility through the geographic location. In addi- tion, Inam-ri and Unheung-ri were identi fi ed as the core and sub- core village. However, the rural amenity and human resources should be regarded as the main factors for promoting rural tourism effectively, as the advantage of this type of tourism is that the rural area has the incentive to retain its characteristic amenity resources, such as its historic sites and natural landscapes. Consequently, thecentrality considering rural amenities could be applied as an important index for integrated rural tourism. When the population, amenity resources and shortest path among villages were consid- ered to evaluate the centrality, the results show that Okdang-ri could be the core village supported by Yongjeon-ri and Bangchon-ri, thereby permitting a more effective provision of services. Inam-ri and Unheung-ri were identi fi ed as the sub-core villages of the two sub-groups while Deogam-ri served as the connection node between these groups. In case of Ocdang-ri, the abundant human and amenity resources are in fl uenced on the high-level degree centrality, and the high-level centrality of neighboring villages such as Bangchon-ri and jukgyo-ri is the main reason for the high-level eigenvector centrality. In short, when the various factors of own village and the neighboring villages are considered to evaluate the centrality, the results is different from the case considering only the geographic location and connectivity among villages. Therefore, it is required to apply the human, amenity resources and the distances to the centrality when the integrated tourism plan is established in rural area. The various strategies for the integrated tourism are established according to the results of the centrality. In case of the main group centeringOcdang-ri,thetourismfacilitysuchasaccommodationand tourism complex could be established using the abundant human and amenity resources. In case of the sub-group centering Inam-ri, the tourism project connecting the small-scale tourism plan of each village could be established because the connectivityamong villages is high despite the small-scale human and amenity resources. However, the population, amenity resources and distances among villages in only study area are in fl uenced on the results of centralities because the connectivity with external villages is not considered in this study. Accordingly, when there are the wide variations in population or the number of amenity resources, the core village could be identi fi ed by the basic databases without the process of evaluation of centralities. Despite these weaknesses, the degree, betweenness and eige nvector centrality could be applied for the effective integrated tourism management. The degree centrality considers the various factors such as population, amenity resources simultaneously and the eigenvector centrality considers not only own centrality but also centrality of neighboring villages. In addition, the character- istic integrated tourism plan will be established through degree, betweenness and eigenvector centrality. When expanding the integrated tourism plan and cooperating with external villages, the process could be applied to identify the relationships between the existing core village and the external villages.