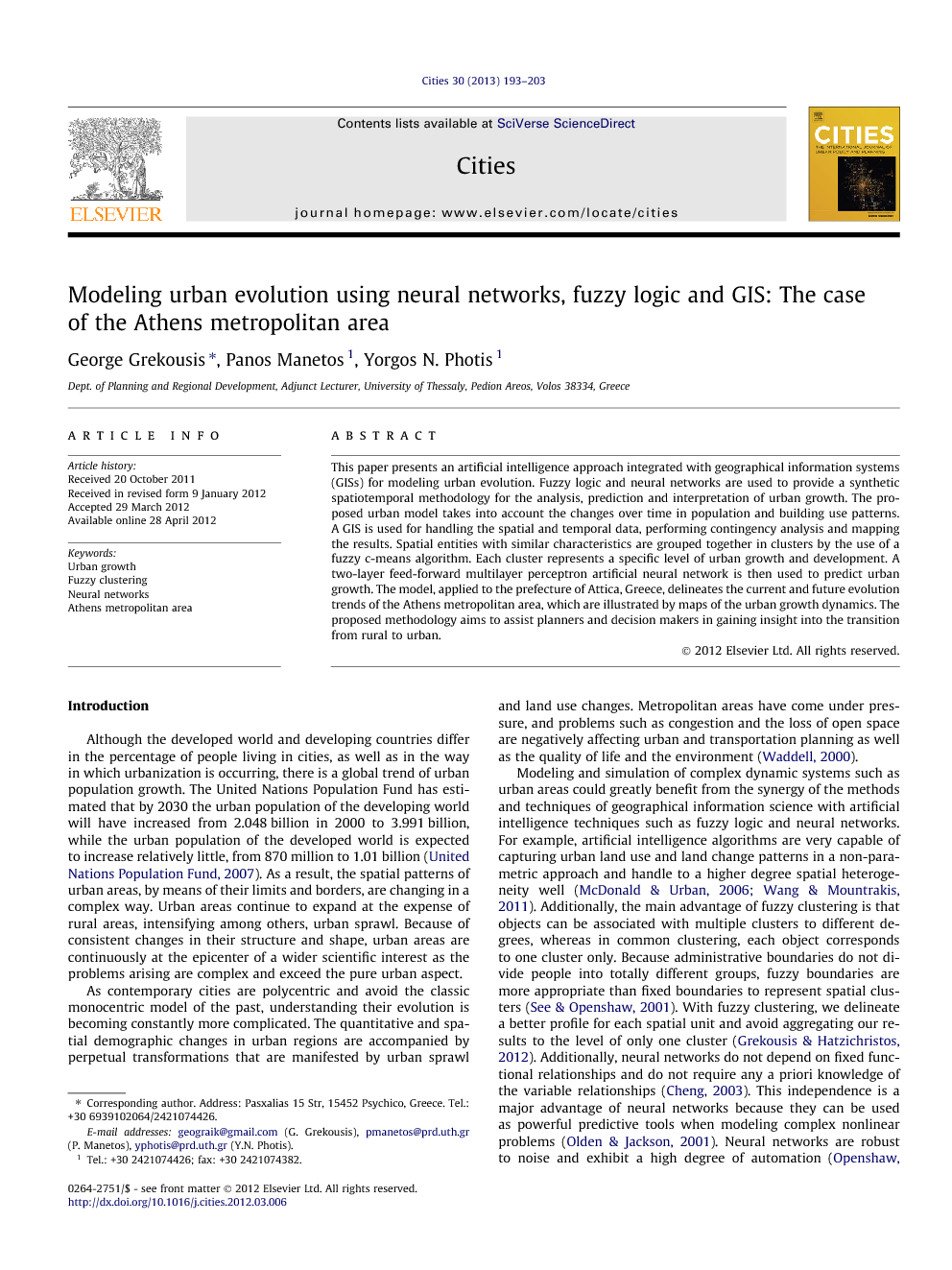 This paper presents an artificial intelligence approach integrated with geographical information systems (GISs) for modeling urban evolution. Fuzzy logic and neural networks are used to provide a synthetic spatiotemporal methodology for the analysis, prediction and interpretation of urban growth. The proposed urban model takes into account the changes over time in population and building use patterns. A GIS is used for handling the spatial and temporal data, performing contingency analysis and mapping the results. Spatial entities with similar characteristics are grouped together in clusters by the use of a fuzzy c-means algorithm. Each cluster represents a specific level of urban growth and development. A two-layer feed-forward multilayer perceptron artificial neural network is then used to predict urban growth. The model, applied to the prefecture of Attica, Greece, delineates the current and future evolution trends of the Athens metropolitan area, which are illustrated by maps of the urban growth dynamics. The proposed methodology aims to assist planners and decision makers in gaining insight into the transition from rural to urban.

Although the developed world and developing countries differ in the percentage of people living in cities, as well as in the way in which urbanization is occurring, there is a global trend of urban population growth. The United Nations Population Fund has estimated that by 2030 the urban population of the developing world will have increased from 2.048 billion in 2000 to 3.991 billion, while the urban population of the developed world is expected to increase relatively little, from 870 million to 1.01 billion (United Nations Population Fund, 2007). As a result, the spatial patterns of urban areas, by means of their limits and borders, are changing in a complex way. Urban areas continue to expand at the expense of rural areas, intensifying among others, urban sprawl. Because of consistent changes in their structure and shape, urban areas are continuously at the epicenter of a wider scientific interest as the problems arising are complex and exceed the pure urban aspect. As contemporary cities are polycentric and avoid the classic monocentric model of the past, understanding their evolution is becoming constantly more complicated. The quantitative and spatial demographic changes in urban regions are accompanied by perpetual transformations that are manifested by urban sprawl and land use changes. Metropolitan areas have come under pressure, and problems such as congestion and the loss of open space are negatively affecting urban and transportation planning as well as the quality of life and the environment (Waddell, 2000). Modeling and simulation of complex dynamic systems such as urban areas could greatly benefit from the synergy of the methods and techniques of geographical information science with artificial intelligence techniques such as fuzzy logic and neural networks. For example, artificial intelligence algorithms are very capable of capturing urban land use and land change patterns in a non-parametric approach and handle to a higher degree spatial heterogeneity well (McDonald and Urban, 2006 and Wang and Mountrakis, 2011). Additionally, the main advantage of fuzzy clustering is that objects can be associated with multiple clusters to different degrees, whereas in common clustering, each object corresponds to one cluster only. Because administrative boundaries do not divide people into totally different groups, fuzzy boundaries are more appropriate than fixed boundaries to represent spatial clusters (See & Openshaw, 2001). With fuzzy clustering, we delineate a better profile for each spatial unit and avoid aggregating our results to the level of only one cluster (Grekousis & Hatzichristos, 2012). Additionally, neural networks do not depend on fixed functional relationships and do not require any a priori knowledge of the variable relationships (Cheng, 2003). This independence is a major advantage of neural networks because they can be used as powerful predictive tools when modeling complex nonlinear problems (Olden & Jackson, 2001). Neural networks are robust to noise and exhibit a high degree of automation (Openshaw, 1997). Furthermore, they do not make any assumptions regarding the nature of the distribution of the data (Grekousis & Hatzichristos, 2012). In this paper, a prototype methodology is proposed for the development of an urban model from a geodemographic perspective. Methods and techniques from artificial intelligence are used for the spatiotemporal analysis, the prediction of future trends and the development of urban regions. More specifically, we propose a method estimating future urban growth using neural nets, fuzzy clustering and geographical information systems (GISs). First, fuzzy clustering is used to group the spatial units into clusters. Clustering is based on data from the national census, such as population, number of buildings and building’s usage. With fuzzy clustering, each spatial unit will be assigned a factor of evolution and urbanism. Based on demographic time-series data, a neural network is used to predict the future urbanism state of each spatial unit. The proposed approach is applied to the Athens metropolitan area of Greece. The remainder of the paper is organized according to the following outline: Section 2 presents a literature review of urban growth models and artificial intelligence, primarily focused on neural networks; Section 3 describes the proposed methodology; Section 4 presents the case study; and finally, Section 5 presents the conclusions of this research.

Enhanced possibilities emerge by the use of fuzzy clustering and neural networks in various spatial problems. The proposed methodology is characterized by its simple and simultaneously dy- namic structure. Fuzzy clustering proved to be particularly effec- tive for clustering because each spatial unit had its own separate profile for each decade. Thus, not only a complete picture of the study area for each time interval was shaped, but by the diachronic change in membership values, future trends for each spatial unit were also revealed. With the use of neural network, the future urbanization state of each municipality arose and as a result, a bet- ter profile for this area may be drawn in order to act at a planning level. The proposed methodological approach delineated the future urbanism level more reliably in combination with a more tempo- rally and thematically complete database, as well as a more exten- sive spatial interaction model. As far as the application was concerned, the applied approach had a direct practical and explanatory value for Athens metropol- itan area itself, in regards to the trends that prevailed in the munic- ipalities for their demographic development and the building use changes in the next decades. The output of the generated neural network was judged satisfactory, taking into consideration the amount of available data. Further development is under way, involving the enrichment of the methodology and the application for the year 2021 when required data from 2011 census become available (estimated during late 2012).