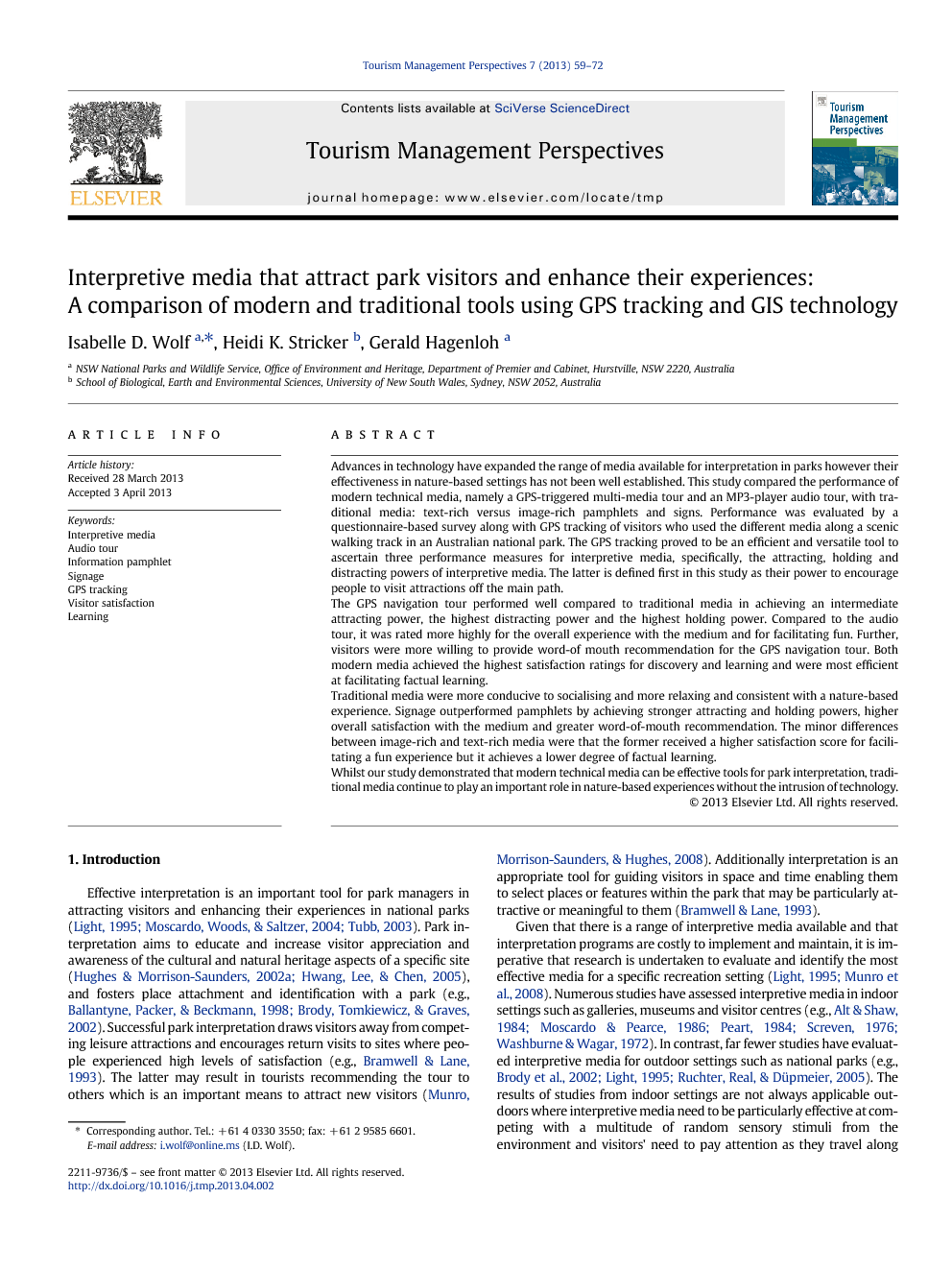 Advances in technology have expanded the range of media available for interpretation in parks however their effectiveness in nature-based settings has not been well established. This study compared the performance of modern technical media, namely a GPS-triggered multi-media tour and an MP3-player audio tour, with traditional media: text-rich versus image-rich pamphlets and signs. Performance was evaluated by a questionnaire-based survey along with GPS tracking of visitors who used the different media along a scenic walking track in an Australian national park. The GPS tracking proved to be an efficient and versatile tool to ascertain three performance measures for interpretive media, specifically, the attracting, holding and distracting powers of interpretive media. The latter is defined first in this study as their power to encourage people to visit attractions off the main path. The GPS navigation tour performed well compared to traditional media in achieving an intermediate attracting power, the highest distracting power and the highest holding power. Compared to the audio tour, it was rated more highly for the overall experience with the medium and for facilitating fun. Further, visitors were more willing to provide word-of mouth recommendation for the GPS navigation tour. Both modern media achieved the highest satisfaction ratings for discovery and learning and were most efficient at facilitating factual learning. Traditional media were more conducive to socialising and more relaxing and consistent with a nature-based experience. Signage outperformed pamphlets by achieving stronger attracting and holding powers, higher overall satisfaction with the medium and greater word-of-mouth recommendation. The minor differences between image-rich and text-rich media were that the former received a higher satisfaction score for facilitating a fun experience but it achieves a lower degree of factual learning. Whilst our study demonstrated that modern technical media can be effective tools for park interpretation, traditional media continue to play an important role in nature-based experiences without the intrusion of technology.

Effective interpretation is an important tool for park managers in attracting visitors and enhancing their experiences in national parks (Light, 1995, Moscardo et al., 2004 and Tubb, 2003). Park interpretation aims to educate and increase visitor appreciation and awareness of the cultural and natural heritage aspects of a specific site (Hughes and Morrison-Saunders, 2002a and Hwang et al., 2005), and fosters place attachment and identification with a park (e.g., Ballantyne et al., 1998 and Brody et al., 2002). Successful park interpretation draws visitors away from competing leisure attractions and encourages return visits to sites where people experienced high levels of satisfaction (e.g., Bramwell & Lane, 1993). The latter may result in tourists recommending the tour to others which is an important means to attract new visitors (Munro, Morrison-Saunders, & Hughes, 2008). Additionally interpretation is an appropriate tool for guiding visitors in space and time enabling them to select places or features within the park that may be particularly attractive or meaningful to them (Bramwell & Lane, 1993). Given that there is a range of interpretive media available and that interpretation programs are costly to implement and maintain, it is imperative that research is undertaken to evaluate and identify the most effective media for a specific recreation setting (Light, 1995 and Munro et al., 2008). Numerous studies have assessed interpretive media in indoor settings such as galleries, museums and visitor centres (e.g., Alt and Shaw, 1984, Moscardo and Pearce, 1986, Peart, 1984, Screven, 1976 and Washburne and Wagar, 1972). In contrast, far fewer studies have evaluated interpretive media for outdoor settings such as national parks (e.g., Brody et al., 2002, Light, 1995 and Ruchter et al., 2005). The results of studies from indoor settings are not always applicable outdoors where interpretive media need to be particularly effective at competing with a multitude of random sensory stimuli from the environment and visitors' need to pay attention as they travel along recreational tracks and explore sites (Hughes and Morrison-Saunders, 2002a and Rademaker, 2008). In addition to this, people's motivation to learn and therefore their incentive to engage with interpretive media may be greater in museums and other educational indoor settings (Light, 1995 and Novey and Hall, 2007). We focus on the evaluation of self-guided, traditional (pamphlets, signage) vs. modern (audio MP3 tours, GPS-triggered multi-media tour) media for a walking trail in a well-frequented national park in the Sydney metropolitan area. GPS-triggered multi-media tours can be delivered via smart-phone applications or on GPS navigation devices as points of interests (POIS). Both technologies have become very popular to retrieve location-based information whilst travelling and compared to others, radio-frequency identification systems (Ferrer, Dew, & Apte, 2010) for example, they are comparatively easy to provide as the user supplies the equipment rather than park management. This is a particular advantage for large park systems where many parks need to be serviced with appropriate interpretive information. The central question in our paper is how modern technical media compare to traditional media as tools for park interpretation. We hypothesised that people prefer traditional media over modern media as the technicality of the latter may distract from the outdoor experience in the natural environment, which is a major motivation to visit national parks. However, modern media were expected to enhance short-term factual learning and to have a higher holding power as they likely increase visitor's attention span. To evaluate the effectiveness of the different media types we used a questionnaire-based survey in combination with the GPS tracking of visitors, which is a comparatively new and insightful technique that generates high-precision data on visitor movements (Shoval and Isaacson, 2007 and Wolf et al., 2012). To our knowledge this is the first study that compares the performance of interpretive media based on an in-depth evaluation of spatio-temporal visitor data. We provide insights into the effectiveness of GPS tracking and GIS for such an evaluation process and how well this approach complements more traditional techniques. Our study exemplifies how the implementation of GPS tracking and GIS technology is crucial to generate reliable and novel performance measures that assist park management in decision-making on the types of interpretive experiences that best meet their requirements.

Our research revealed that the choice of media is fundamental for effective interpretation as it influences visitor satisfaction, word-of-mouth recommendation, short-term factual learning and all three attracting, distracting and holding powers. This study further demonstrated that modern technical media, specifically GPS-triggered multi-media tours, performed well in most of these measures. The use of rapidly advancing technology such as navigation devices and smartphones is becoming widespread in society. Therefore, modern media may be more readily received by a wider audience than for instance pamphlets. In addition, modern technical media appeal to more senses than traditional media thus holding visitor attention for longer periods. Another advantage of using modern media is that they are not subject to vandalism such as graffiti on signage which cause substantial costs to parks particularly in metropolitan areas. As a result of visitor feedback, we can recommend numerous measures to improve the performance of modern technical media even further: (1) offering tours for download to a personal device with which people are comfortable and which enables them to choose whether to use headphones; (2) automatically triggered tour stops and detour announcements with the option to trigger the audio component manually; (3) the provision of several short recordings over one long recording; (4) multi-media content that combines audio, text and imagery; (5) a thematic form of interpretation where people can choose recordings/text/imagery that would suit their particular interests. The ability to personalise products has become very prevalent in society and visitor interpretation can greatly benefit from giving people choices. Modern media could realise this in the form of multi-lingual audio recordings and thematic information on relevant topics of interest such as flora and fauna, anthropogenic heritage and art, or tours for different age-classes (Ruchter et al., 2005). Information that is relevant to visitors is likely to motivate them to focus on the content and engage with the medium (Moscardo, 1996). For those who prefer traditional media, signage is an appropriate option. Signage has a long history as a traditional form of park interpretive media and our study demonstrated its high performance. Signs should be presented with an appropriate combination of text and imagery which enhances learning and fun. This combination appeals to both those who are receptive of text for learning and those who are more visual in their senses. The range of interpretive media in a park setting needs to accommodate the wide-ranging ages, interests and learning styles of its visitor community (Beer, 1987 and Light, 1995). These insights were gained by a mixed-method approach of questionnaire-based surveys and analysis of fine-scale spatial data of visitor movements. This combined approach enabled a comprehensive assessment of traditional and novel performance criteria for interpretive media that account for the range of objectives that interpretive programs pursue. Whilst the latter is particularly effective for detecting differences in the engagement with different interpretive media, the former may ascertain the influence of other factors such as visitor characteristics on the interpretive experience of visitors in parks.