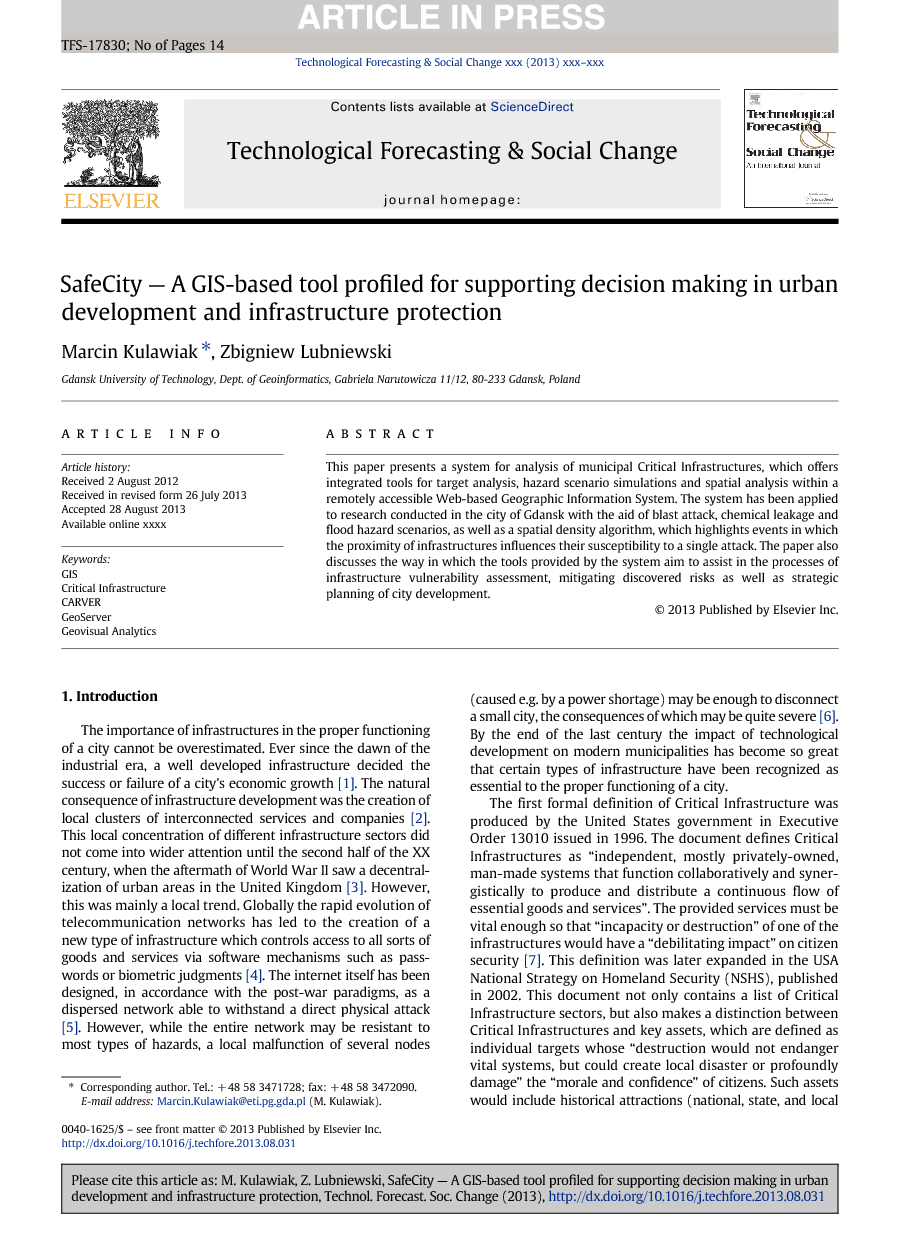 This paper presents a system for analysis of municipal Critical Infrastructures, which offers integrated tools for target analysis, hazard scenario simulations and spatial analysis within a remotely accessible Web-based Geographic Information System. The system has been applied to research conducted in the city of Gdansk with the aid of blast attack, chemical leakage and flood hazard scenarios, as well as a spatial density algorithm, which highlights events in which the proximity of infrastructures influences their susceptibility to a single attack. The paper also discusses the way in which the tools provided by the system aim to assist in the processes of infrastructure vulnerability assessment, mitigating discovered risks as well as strategic planning of city development.

Geographical concentration of Critical Infrastructures is an important issue that governments are becoming increasingly aware of. Legislative measures are being taken in order to mitigate some of the negative impact of clustering. The United States Congress, for instance, recognized the need to prevent future concentration of Critical Infrastructure in the aftermath of hurricane Katrina. The first relevant policy it passed was the Energy Policy Act which states that new liquefied natural gas import terminals should be facilitated in diverse ports [63]. However, laws like this do not yet deal with concentration of infrastructures from different sectors. They will not prevent scenarios similar to the recent terrorist attack in Oslo, in which a single determined individual equipped with a car bomb made of fertilizer and fuel oil has succeeded in disrupting the operations of several institutions. While the current legislation in the form of NSHS and EPCIP will not prevent the creation of such clusters, they may be identified and analyzed with the aid of appropriate software. This research has shown that the application of a dedicated GIS to the analysis of Critical Infrastructure even on a very basic level helps to identify often overlooked issues such as the spatial concentration of infrastructures from different sectors. The presented system offers tools which have been designed for specific purposes related to modeling and spatial analysis of different types of hazards in urban regions. The algorithms employed by these tools operate in a spatial context and produce thematic layers representing either the outcome of a possible hazard (in the case of models) or the results of spatial risk analysis. On the basis of the type of produced analysis, each algorithm may be applied to different phases of the emergency management process. In particular, the hazard simulation algorithms may be applied to creation of hazard scenarios during the Preparedness phase, mapping of identified threats in the Response phase as well as simulating the geographical impact of threats during the Mitigation phase. The integrated CARVER2™ module enables an analyst to identify weaknesses in the defense of Critical Infrastructures by means of target analysis with the use of data available in the city databases. By employing quantitative methods of analysis to a set of standard attributes, the tool allows for comparing dissimilar types of infrastructure using the same standards and aims to assist the user in making decisions regarding investments in countermeasures. The computed criticality scores are stored in the system geodatabase and may be used for further analysis e.g. of the spatial distribution of infrastructure vulnerability. This algorithm helps to identify “clusters” of infrastructures highly susceptible to a specific type of attack. Because such groups of objects may be a much more attractive target than any single infrastructure on its own, their identification should be a priority in strategic planning of resource allocation for security and attack prevention. In the Critical Infrastructure emergency management process, the algorithm is meant to be used during the Mitigation phase. The SafeCity GIS not only allows for remote execution of diverse analysis algorithms, but also enables rapid dissemination of their results between different parties. For example, an analysis of the possible outcomes of a flood hazard performed by a remote analyst may be readily accessed by rescue services on their way to the affected area. However, in case an official may not be authorized (or qualified) to use the system, the SafeCity GIS also allows for quick creation of an image file containing selected elements (e.g. thematic layers) of the produced analyses. Due to the application of Visual Analytics, the visualizations provided by the developed algorithms convey more information, which should enable quicker decision making. This in turn should increase the amount of time available for taking decisive actions. By providing a central, easy to use hub for storage and analysis of Critical Infrastructure data, the system aims to avoid some of the common bottlenecks blocking the adoption of planning support GIS. In particular, even if public services are aware of the availability of a planning support system, they often either lack the experience to make full use of the system, or simply have no intentions of using it [64]. Because the software was built with the direct involvement of municipalities and rescue services, most of these obstacles should be removed. The sample deployment of the system in the city of Gdansk has shown that applying modern Open Source technology to processing of existing data in cooperation with prospective users results in a cost-effective solution which municipalities are eager to use. This way the system constitutes an invaluable asset in Critical Infrastructure protection, improving synergy between authorities and providing complex support in different phases of the hazard management process. It should be pointed out that the use of both the presented software and methodology is in no way limited to the described case of the City of Gdansk, but may be easily applied to any town situated in Poland, in Europe or quite likely any other part of the world which possesses a basic IT infrastructure. This, in particular, applies to small and medium-sized towns which cannot afford an extensive infrastructure security policy. The outcome of the presented study shows that the quality of Critical Infrastructure protection in such cities may be substantially improved at virtually no additional costs. It should be stressed, however, that although such software offers great help in strategic planning, it will not replace an experienced analyst who understands that eventual investments in countermeasures must be carefully balanced because an antagonist may not necessarily attack the optimal target [65].