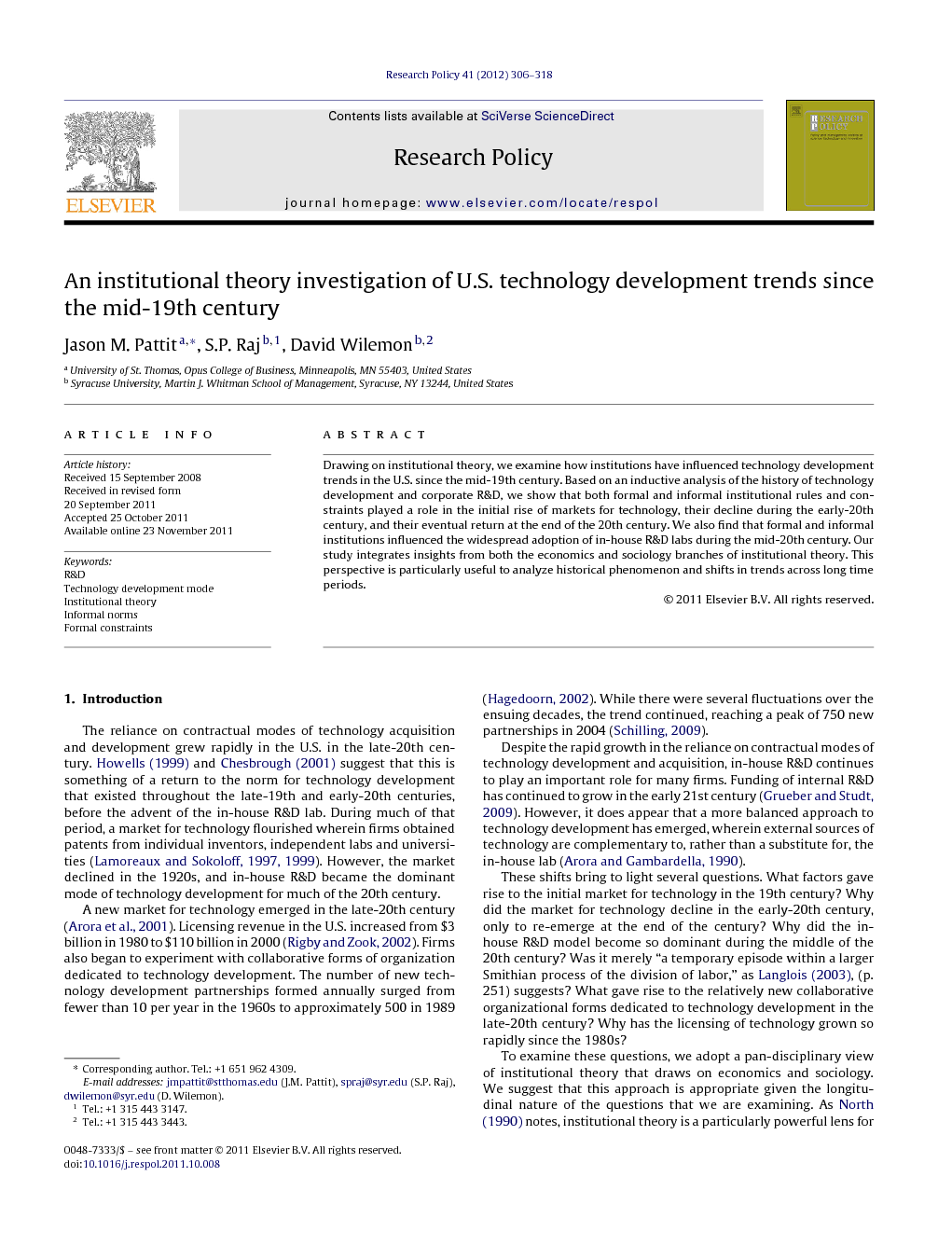 Drawing on institutional theory, we examine how institutions have influenced technology development trends in the U.S. since the mid-19th century. Based on an inductive analysis of the history of technology development and corporate R&D, we show that both formal and informal institutional rules and constraints played a role in the initial rise of markets for technology, their decline during the early-20th century, and their eventual return at the end of the 20th century. We also find that formal and informal institutions influenced the widespread adoption of in-house R&D labs during the mid-20th century. Our study integrates insights from both the economics and sociology branches of institutional theory. This perspective is particularly useful to analyze historical phenomenon and shifts in trends across long time periods

The reliance on contractual modes of technology acquisition and development grew rapidly in the U.S. in the late-20th century. Howells (1999) and Chesbrough (2001) suggest that this is something of a return to the norm for technology development that existed throughout the late-19th and early-20th centuries, before the advent of the in-house R&D lab. During much of that period, a market for technology flourished wherein firms obtained patents from individual inventors, independent labs and universities (Lamoreaux and Sokoloff, 1997 and Lamoreaux and Sokoloff, 1999). However, the market declined in the 1920s, and in-house R&D became the dominant mode of technology development for much of the 20th century. A new market for technology emerged in the late-20th century (Arora et al., 2001). Licensing revenue in the U.S. increased from $3 billion in 1980 to $110 billion in 2000 (Rigby and Zook, 2002). Firms also began to experiment with collaborative forms of organization dedicated to technology development. The number of new technology development partnerships formed annually surged from fewer than 10 per year in the 1960s to approximately 500 in 1989 (Hagedoorn, 2002). While there were several fluctuations over the ensuing decades, the trend continued, reaching a peak of 750 new partnerships in 2004 (Schilling, 2009). Despite the rapid growth in the reliance on contractual modes of technology development and acquisition, in-house R&D continues to play an important role for many firms. Funding of internal R&D has continued to grow in the early 21st century (Grueber and Studt, 2009). However, it does appear that a more balanced approach to technology development has emerged, wherein external sources of technology are complementary to, rather than a substitute for, the in-house lab (Arora and Gambardella, 1990). These shifts bring to light several questions. What factors gave rise to the initial market for technology in the 19th century? Why did the market for technology decline in the early-20th century, only to re-emerge at the end of the century? Why did the in-house R&D model become so dominant during the middle of the 20th century? Was it merely “a temporary episode within a larger Smithian process of the division of labor,” as Langlois (2003), (p. 251) suggests? What gave rise to the relatively new collaborative organizational forms dedicated to technology development in the late-20th century? Why has the licensing of technology grown so rapidly since the 1980s? To examine these questions, we adopt a pan-disciplinary view of institutional theory that draws on economics and sociology. We suggest that this approach is appropriate given the longitudinal nature of the questions that we are examining. As North (1990) notes, institutional theory is a particularly powerful lens for examining economic phenomenon both at a moment in time and over time. This feature is particularly valuable, as technology development practices in the U.S. have changed twice over the period examined in this study. It is important to recognize that the current period is not likely to be the determinative end-point in the evolution of these trends either; they are apt to change again at some time in the future. Thus, any theory employed needs to be able to account for the possibility of change and how change comes about. Recent work by scholars of institutionalism has focused on further developing the theory of change (e.g., Hargrave and Van de Ven, 2006). Institutional scholars have long acknowledged that the institutional setting can influence the organizational options available to decision makers (Coase, 1937, Williamson, 1985, Williamson, 1998 and Nee, 1992). While institutional theory concepts have been relied on to explain societal and national trends, Ingram and Clay (2000) suggest that such concepts can be extended to investigate industry and firm-level trends as well. Thus, the institutional framework developed by North (1990) and formalized by Williamson, 1998 and Williamson, 2000, which asserts that actors pursue their interests by making choices within constraints, serves as the starting point for our analysis. We extend the model by integrating North's theory of informal norms with research on the role of science in industry and on managerial beliefs regarding internal control of innovation. Our objective is not to test institutional theory per se, but rather to use institutional theory to further our understanding of the major shifts that were observed. Our paper is organized as follows. We start by briefly discussing the literature that examines technology development and acquisition. In particular, we review firm-level theories that have been drawn upon to analyze project- and firm-level decisions. We then discuss the difficulties of relying on such theories alone to answer the questions that we have posed in this study, and suggest that institutional theory can further our understanding of the aggregate trends observed. Then, we examine the history of technology development in the U.S. since the mid-19th century by applying the logic of institutional theory. We divide our historical examination into three eras and identify several formal institutions and informal norms and beliefs in each era. Finally, we discuss the implications of and conclusions from our analysis.