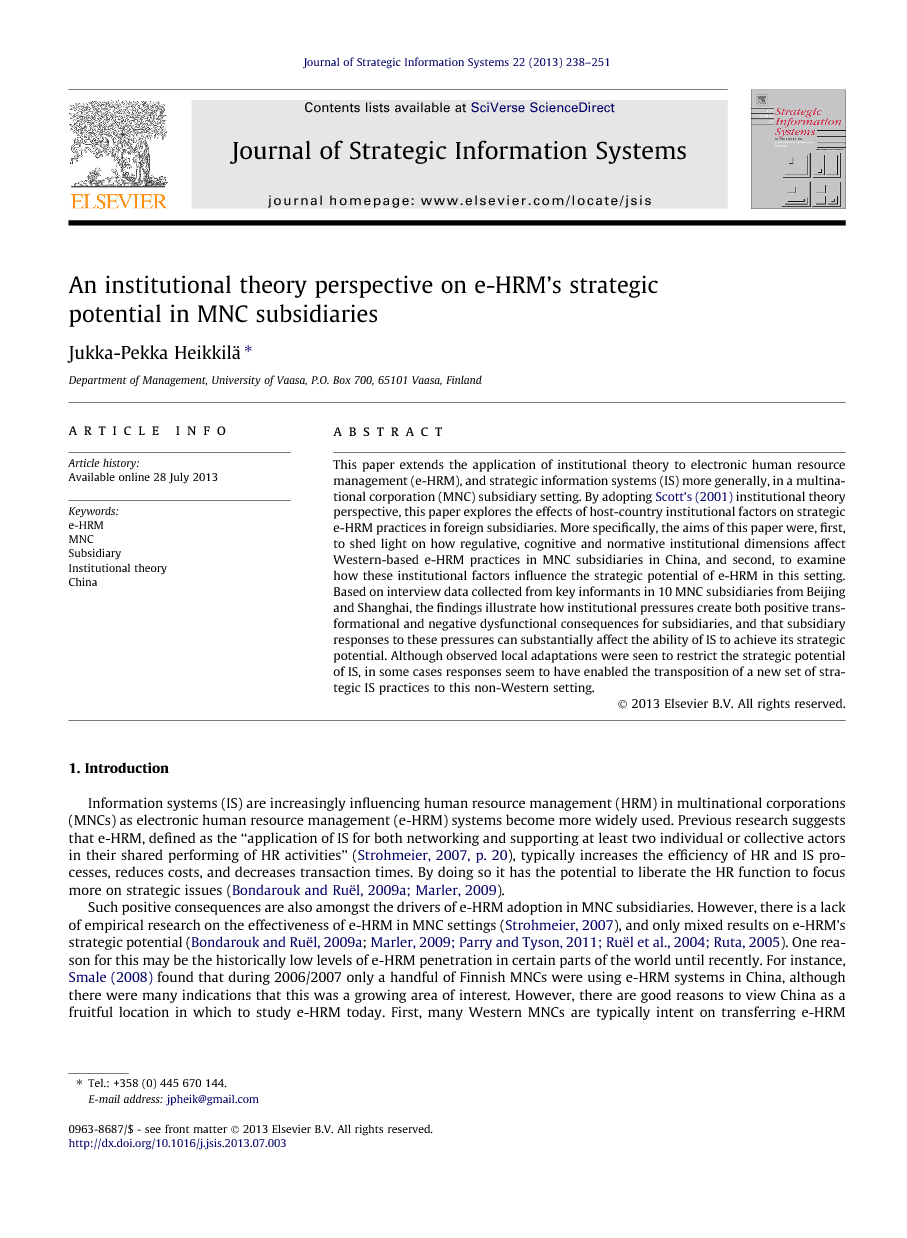 This paper extends the application of institutional theory to electronic human resource management (e-HRM), and strategic information systems (IS) more generally, in a multinational corporation (MNC) subsidiary setting. By adopting Scott’s (2001) institutional theory perspective, this paper explores the effects of host-country institutional factors on strategic e-HRM practices in foreign subsidiaries. More specifically, the aims of this paper were, first, to shed light on how regulative, cognitive and normative institutional dimensions affect Western-based e-HRM practices in MNC subsidiaries in China, and second, to examine how these institutional factors influence the strategic potential of e-HRM in this setting. Based on interview data collected from key informants in 10 MNC subsidiaries from Beijing and Shanghai, the findings illustrate how institutional pressures create both positive transformational and negative dysfunctional consequences for subsidiaries, and that subsidiary responses to these pressures can substantially affect the ability of IS to achieve its strategic potential. Although observed local adaptations were seen to restrict the strategic potential of IS, in some cases responses seem to have enabled the transposition of a new set of strategic IS practices to this non-Western setting.

Information systems (IS) are increasingly influencing human resource management (HRM) in multinational corporations (MNCs) as electronic human resource management (e-HRM) systems become more widely used. Previous research suggests that e-HRM, defined as the “application of IS for both networking and supporting at least two individual or collective actors in their shared performing of HR activities” (Strohmeier, 2007, p. 20), typically increases the efficiency of HR and IS processes, reduces costs, and decreases transaction times. By doing so it has the potential to liberate the HR function to focus more on strategic issues (Marler, 2009 and Bondarouk and Ruël, 2009a). Such positive consequences are also amongst the drivers of e-HRM adoption in MNC subsidiaries. However, there is a lack of empirical research on the effectiveness of e-HRM in MNC settings (Strohmeier, 2007), and only mixed results on e-HRM’s strategic potential (Bondarouk and Ruël, 2009a; Marler, 2009, Parry and Tyson, 2011, Ruël et al., 2004 and Ruta, 2005). One reason for this may be the historically low levels of e-HRM penetration in certain parts of the world until recently. For instance, Smale (2008) found that during 2006/2007 only a handful of Finnish MNCs were using e-HRM systems in China, although there were many indications that this was a growing area of interest. However, there are good reasons to view China as a fruitful location in which to study e-HRM today. First, many Western MNCs are typically intent on transferring e-HRM (and models of HRM) to units in China; second, there are significant institutional differences between China and the EU and USA; and third, the institutional context for e-HRM in China is undergoing significant change. There is still a need to address issues arising from the MNC context in international IS research (Leonardi, 2008), and this is currently a topic of increasing interest. However, Currie (2009) argues that institutional theory has not been sufficiently applied in IS research and Weerakkody et al. (2009) conclude that the use of institutional theory is still comparatively narrow and limited in the IS domain, especially when considering its wider use in organizational studies of HRM. In the HRM field, institutional theory has been used to shed light on HRM practices in MNC subsidiaries, and the factors that influence them (e.g., Björkman et al., 2008 and Myloni et al., 2004). Sumelius (2009) suggests that this theoretical approach still has the potential to increase our understanding of various aspects of subsidiary HRM. Reviews of the extant e-HRM literature (Bondarouk and Ruël, 2009b; Burbach and Royle, 2010 and Strohmeier, 2007) underscore a dearth of research in the investigation of institutional factors affecting e-HRM practices in MNCs. The only study by Burbach and Royle (2010) focuses on the factors affecting the diffusion of e-HRM practices between the parent and its foreign subsidiaries. This found that an MNC subsidiary’s e-HRM practices, like its HRM practices, are influenced by a broad range of external institutional factors as well as pressure from the MNC headquarters. The study did not, however, shed light on the outcomes of institutional pressures on the effectiveness or strategic impact of e-HRM practices. This paper addresses this gap and investigates the effects of institutional factors on e-HRM practices and the consequences these have for e-HRM realizing its strategic potential. More specifically, this paper explores national host-country institutional pressures on e-HRM practices in foreign subsidiaries in China. Accordingly, it seeks to contribute to the IS and e-HRM strategy literature on two main fronts. First, this paper sheds light on how institutional pressures affect Western-based e-HRM practices in MNC subsidiaries in China. Second, this paper examines how responses to these pressures influence e-HRM’s strategic potential in this setting. By using e-HRM as the empirical focus of analysis, this paper contributes theoretically and empirically to our understanding of factors affecting the strategic potential of IS in an MNC subsidiary setting. The next sections introduce the subject of e-HRM’s strategic potential and e-HRM in MNCs. The subsequent sections present Scott’s (2001) institutional theory dimensions, review the work from the IS field that applies an institutional approach, and conclude with a discussion of China’s institutional setting that draws on work from the HRM and enterprise resource planning (ERP) literatures. Following a description of the study’s method, the findings are presented and discussed. The paper is concluded with a discussion of the study’s theoretical and practical implications.

Through its empirical focus on e-HRM in MNC subsidiaries, this study contributes to the discourse on international strategic IS by illustrating how the local adaptation of IS, while necessary in order to confer legitimacy and increase user acceptance, has also been responsible for increases in costs, time consuming administrative tasks, and in some cases a decrease in the perceived quality of system service delivery. This should alert us to the possibility that too much IS adaptation may reduce the benefits of globally standardized IS and the ability, in this case, of e-HRM systems to transform the role of HR towards being more strategic. While some of the localization issues identified in this study might be specific to China; legislation, networks, corruption and language standardization are also likely to be relevant in the institutional settings of a number of other countries. Interestingly, the findings of this study also suggest that a non-Western institutional environment is not always a barrier to strategic IS realizing its strategic potential. Evidence of the relative ease of implementation, a focus on better talent management systems, issues regarding corruption, and the global piloting of some Chinese-based systems suggests that the Chinese environment can, to a certain extent, be seen as facilitators of increasing strategic IS potential in MNCs through the transposition of IS-based activities to the Chinese environment. With regard to the strategic IS literature and the usefulness of institutional theory, Leonardi (2008, p. 981) also discusses the dilemma of localization and standardization, stating that: When technologies developed in Western industrialized countries are implemented in non-Western countries, there is far greater potential for mismatches between the (Western) cultural logics inscribed in the technologies and those (non-Western) cultural logics through which the technologies are perceived and used and around which work is structured. In line with this argument, and due to its adoption of an institutional theory perspective, this study contributes to the discussion that this dilemma is also inherent in the strategic IS practices of MNC subsidiaries, thus confirming the validity of applying the institutional approach as a macro-theoretical foundation to understand the nature of Western-based e-HRM practices and their strategic potential across different institutional arrangements. Moreover, the usefulness of institutional theory in IS and e-HRM fields is also evident when investigating sources of innovative IS practices in foreign subsidiaries. Through the institutional lens the study evidenced both positive transformational and negative dysfunctional consequences, which enabled us to show that in response to the attempted transfer of IS and foreign managerial practices, a foreign practice can become de-institutionalized and become a new, innovative practice applicable to a local problem. To conclude, this paper emphasizes the need for the strategic IS, HRM and e-HRM fields of research to acknowledge the existence of institutional dualities in the international context, while remaining cognizant of the potential limitations attached to excessive localization. Social constructivist research (e.g., Jackson et al., 2002) suggests that the uses of technologies are the result of a complex series of interactions between the material IT elements and the practices that constitute the national and organizational contexts in which they are implemented. For strategic IS and e-HRM to realize its strategic potential, MNCs face the complex challenge of implementing typically standardized systems, which have produced strategic benefits in familiar institutional settings, in less familiar settings, and deciding which aspects they are willing to sacrifice in order to achieve greater legitimacy, acceptance and usage.