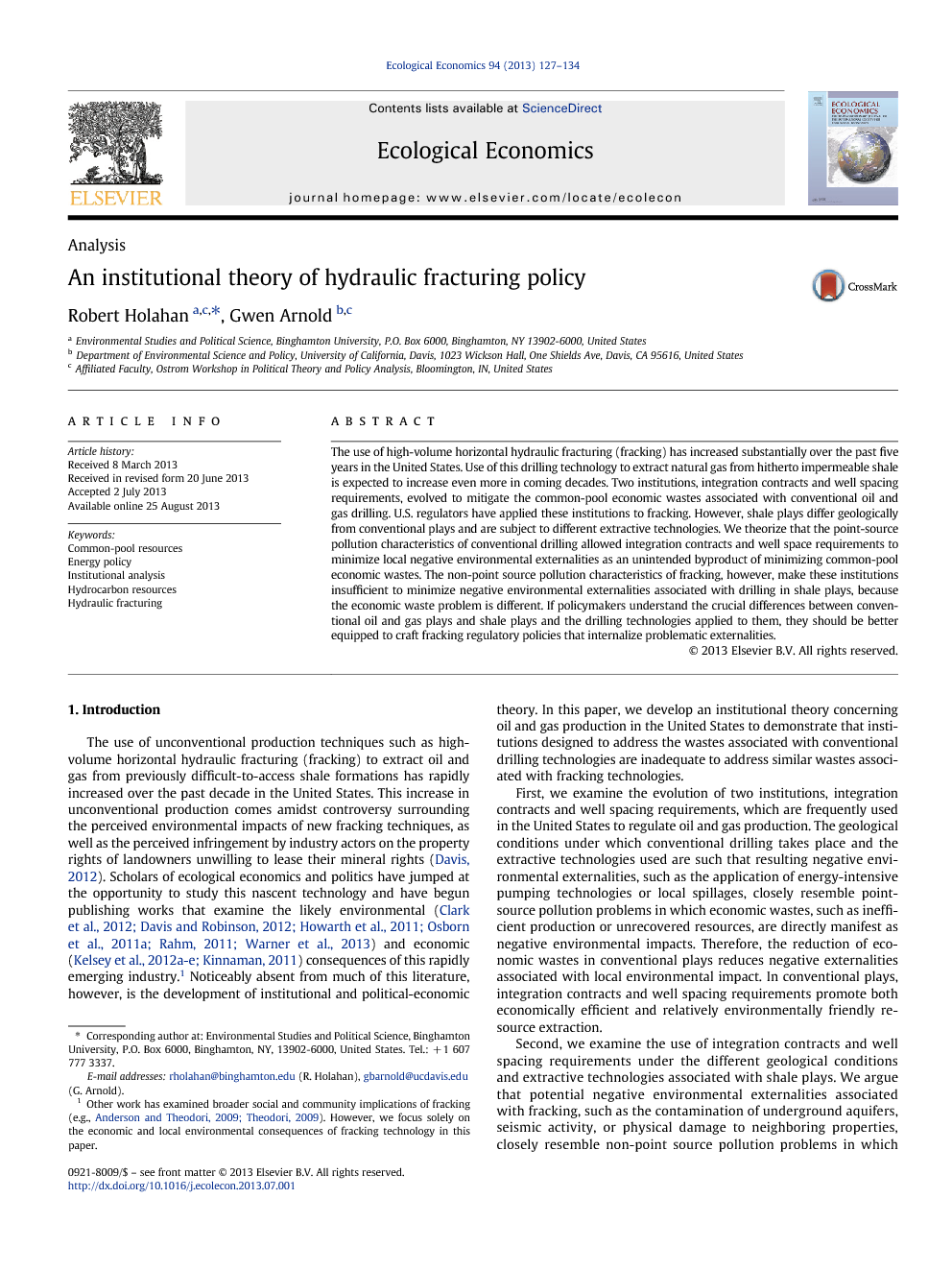 The use of high-volume horizontal hydraulic fracturing (fracking) has increased substantially over the past five years in the United States. Use of this drilling technology to extract natural gas from hitherto impermeable shale is expected to increase even more in coming decades. Two institutions, integration contracts and well spacing requirements, evolved to mitigate the common-pool economic wastes associated with conventional oil and gas drilling. U.S. regulators have applied these institutions to fracking. However, shale plays differ geologically from conventional plays and are subject to different extractive technologies. We theorize that the point-source pollution characteristics of conventional drilling allowed integration contracts and well space requirements to minimize local negative environmental externalities as an unintended byproduct of minimizing common-pool economic wastes. The non-point source pollution characteristics of fracking, however, make these institutions insufficient to minimize negative environmental externalities associated with drilling in shale plays, because the economic waste problem is different. If policymakers understand the crucial differences between conventional oil and gas plays and shale plays and the drilling technologies applied to them, they should be better equipped to craft fracking regulatory policies that internalize problematic externalities.

The use of unconventional production techniques such as high-volume horizontal hydraulic fracturing (fracking) to extract oil and gas from previously difficult-to-access shale formations has rapidly increased over the past decade in the United States. This increase in unconventional production comes amidst controversy surrounding the perceived environmental impacts of new fracking techniques, as well as the perceived infringement by industry actors on the property rights of landowners unwilling to lease their mineral rights (Davis, 2012). Scholars of ecological economics and politics have jumped at the opportunity to study this nascent technology and have begun publishing works that examine the likely environmental (Clark et al., 2012, Davis and Robinson, 2012, Howarth et al., 2011, Osborn et al., 2011a, Rahm, 2011 and Warner et al., 2013) and economic (Kelsey et al., 2012a-e and Kinnaman, 2011) consequences of this rapidly emerging industry.1 Noticeably absent from much of this literature, however, is the development of institutional and political-economic theory. In this paper, we develop an institutional theory concerning oil and gas production in the United States to demonstrate that institutions designed to address the wastes associated with conventional drilling technologies are inadequate to address similar wastes associated with fracking technologies. First, we examine the evolution of two institutions, integration contracts and well spacing requirements, which are frequently used in the United States to regulate oil and gas production. The geological conditions under which conventional drilling takes place and the extractive technologies used are such that resulting negative environmental externalities, such as the application of energy-intensive pumping technologies or local spillages, closely resemble point-source pollution problems in which economic wastes, such as inefficient production or unrecovered resources, are directly manifest as negative environmental impacts. Therefore, the reduction of economic wastes in conventional plays reduces negative externalities associated with local environmental impact. In conventional plays, integration contracts and well spacing requirements promote both economically efficient and relatively environmentally friendly resource extraction. Second, we examine the use of integration contracts and well spacing requirements under the different geological conditions and extractive technologies associated with shale plays. We argue that potential negative environmental externalities associated with fracking, such as the contamination of underground aquifers, seismic activity, or physical damage to neighboring properties, closely resemble non-point source pollution problems in which the reduction of economic wastes does not necessarily result in a consequent decrease of local environmental impact. While the geology of most conventional oil and gas plays allows well operators to drill targeted, carefully controlled wellbores into known geologic formations, the geology of shale plays necessitates horizontal wellbores that expand into unknown geologic conditions (Chalmers et al., 2012). These differences imply that integration contracts and well spacing requirements are less effective at promoting economically efficient and environmentally friendly resource extraction in shale plays. Our theory draws on the work of Libecap and Wiggins, 1984, Libecap and Wiggins, 1985, Wiggins and Libecap, 1985 and Libecap, 1989, who explore the use of voluntary and forced integration as mechanisms for minimizing common-pool economic wastes in conventional oil plays. We expand on their work by incorporating environmental impacts into production outcomes and then by holding institutions constant and theoretically exploring economic and environmental outcomes under differing geological and technological conditions. Policies designed to regulate fracking, we argue, should address the non-point source nature of the externalities produced by this technology; they should match the geological and economic realities of fracking (see also Scott et al., 2011). Our argument is not about whether fracking is a normatively desirable production technology. Like all technologies, there are methods of use that are more or less economically efficient and more or less sustainable. Fracking may be pursued in a relatively economically and environmentally friendly manner, especially when its costs and benefits are compared to those associated with other common methods of producing energy from fossil fuels. Natural gas may indeed be a “transition fuel” that offers a bridge between carbon-based and renewable energy sources (Pacala and Socolow, 2004).2 Our argument is that to achieve simultaneously the minimal amount of economic waste and environmental impact during resource production, regulatory institutions must address the economic incentives and environmental consequences jointly generated by the geology of shale plays and the technology used to exploit them. The next section provides a brief review of recent policy scholarship concerning fracking and highlights the general lack of theoretical grounding in the literature. Section 3 introduces the common-pool economic waste problems in conventional and shale productions, respectively. Section 4 examines the institutional evolution of current oil and gas regulations by explaining how coordinating institutions evolved to address economic wastes associated with conventional drilling. It then discusses how the geological and technological differences between conventional drilling and fracking generate distinct economic incentives that, in turn, influence environmental impacts differently. Section 5 concludes with a summary and a discussion of potentially fruitful research avenues and fracking policy measures.