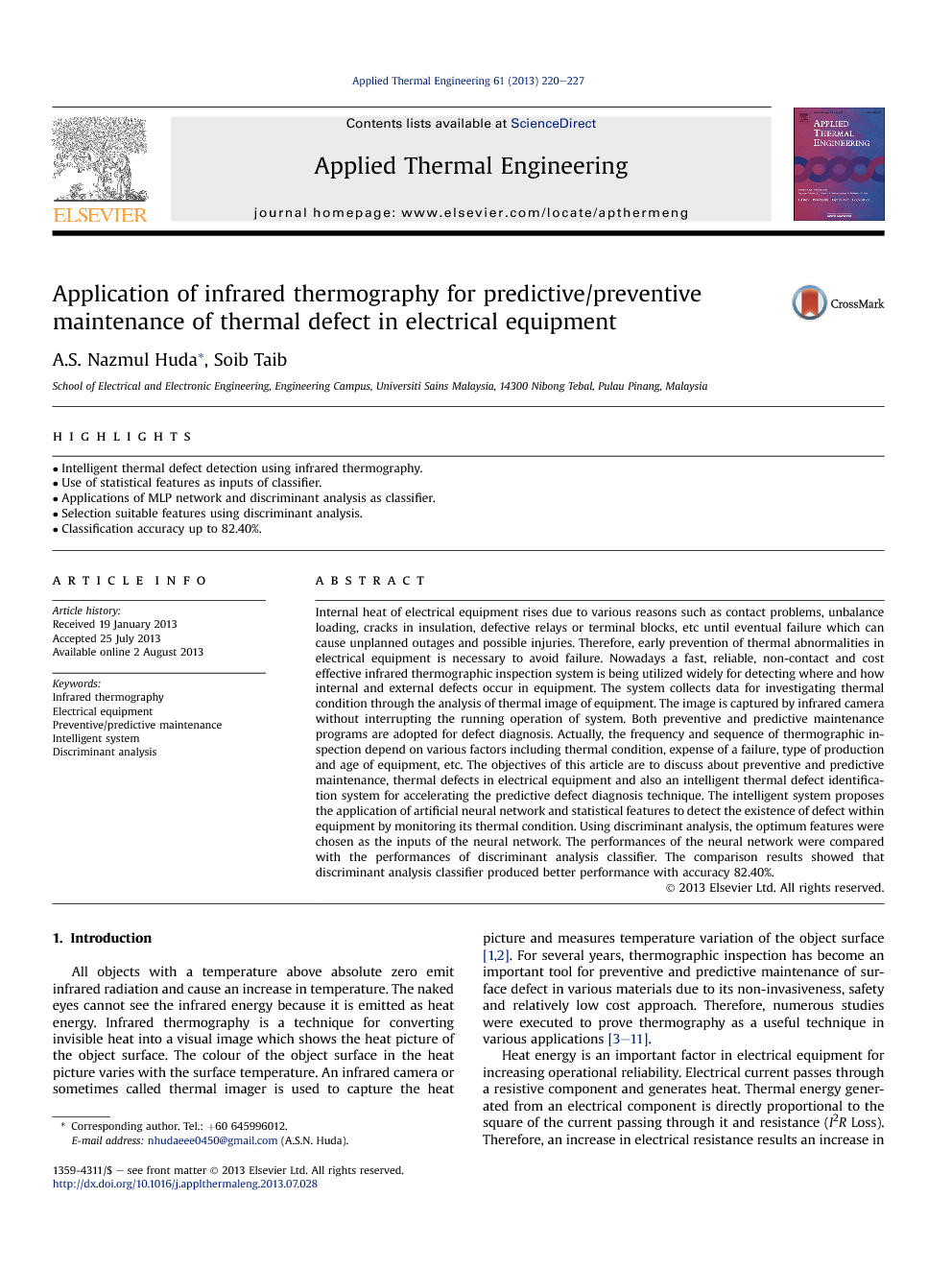 Internal heat of electrical equipment rises due to various reasons such as contact problems, unbalance loading, cracks in insulation, defective relays or terminal blocks, etc until eventual failure which can cause unplanned outages and possible injuries. Therefore, early prevention of thermal abnormalities in electrical equipment is necessary to avoid failure. Nowadays a fast, reliable, non-contact and cost effective infrared thermographic inspection system is being utilized widely for detecting where and how internal and external defects occur in equipment. The system collects data for investigating thermal condition through the analysis of thermal image of equipment. The image is captured by infrared camera without interrupting the running operation of system. Both preventive and predictive maintenance programs are adopted for defect diagnosis. Actually, the frequency and sequence of thermographic inspection depend on various factors including thermal condition, expense of a failure, type of production and age of equipment, etc. The objectives of this article are to discuss about preventive and predictive maintenance, thermal defects in electrical equipment and also an intelligent thermal defect identification system for accelerating the predictive defect diagnosis technique. The intelligent system proposes the application of artificial neural network and statistical features to detect the existence of defect within equipment by monitoring its thermal condition. Using discriminant analysis, the optimum features were chosen as the inputs of the neural network. The performances of the neural network were compared with the performances of discriminant analysis classifier. The comparison results showed that discriminant analysis classifier produced better performance with accuracy 82.40%.

In this paper, an intelligent predictive diagnosis system for detecting invisible thermal defects in electrical equipment by infrared thermography technology is proposed. The diagnosis system employed the multilayered perceptron network with Levenberg–Marquardt training algorithm to classify the thermal conditions of equipments into two classes namely ‘no defect’ and ‘defect’. Total fifteen features including first, second order statistical features and also mutual features (i.e. the numerical difference between the value of hot and reference features) were calculated from sample images. Using discriminant analysis feature selection method, 10 optimum features were chosen as the inputs of the neural network. The performance of the neural network was compared with the discriminant analysis classifier. The comparison results showed that the discriminant analysis classifier produced better performance with 82.40% of accuracy. By developing the system, the technical department can schedule the recommended actions. This will play a significant role for fast and reliable inspection to prevent equipment failure potentially.