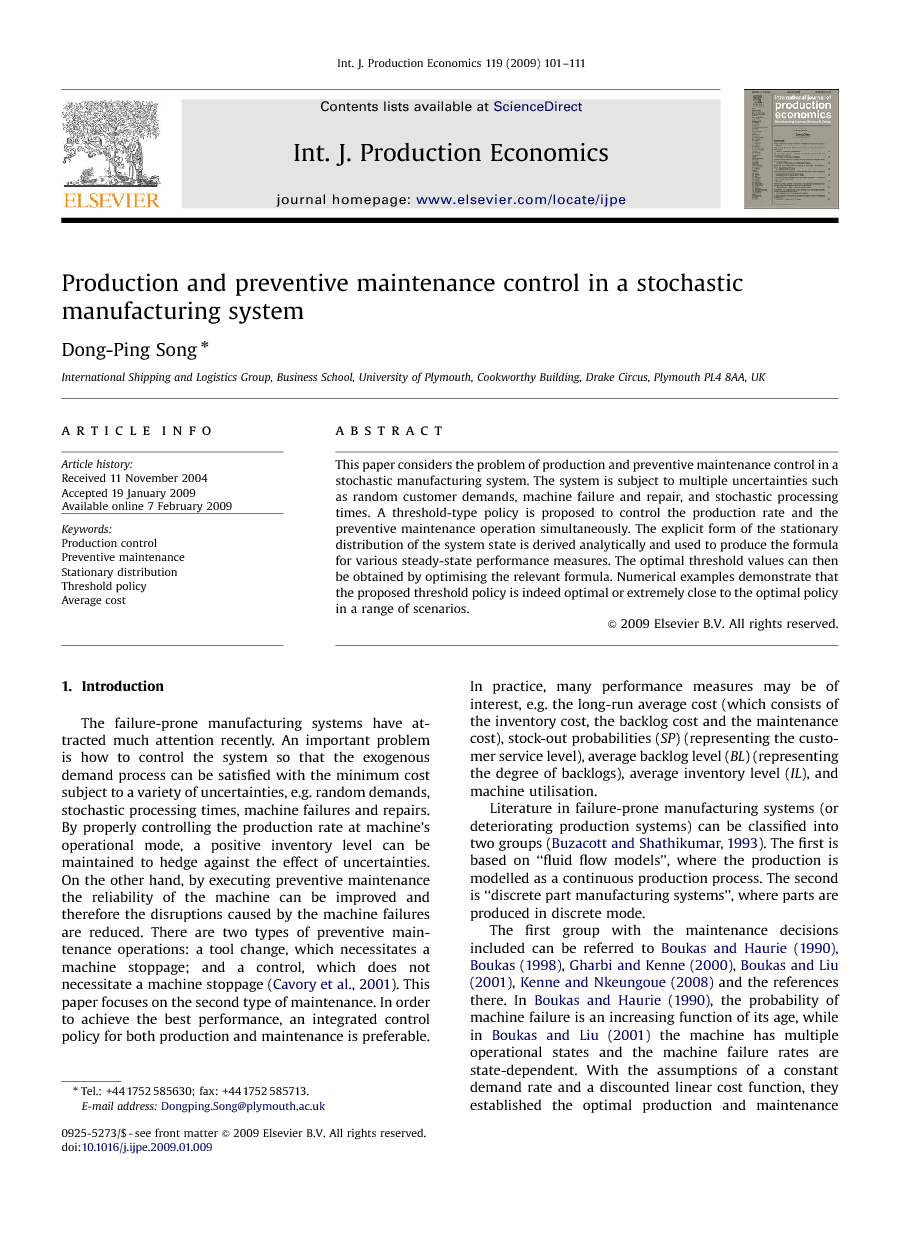 This paper considers the problem of production and preventive maintenance control in a stochastic manufacturing system. The system is subject to multiple uncertainties such as random customer demands, machine failure and repair, and stochastic processing times. A threshold-type policy is proposed to control the production rate and the preventive maintenance operation simultaneously. The explicit form of the stationary distribution of the system state is derived analytically and used to produce the formula for various steady-state performance measures. The optimal threshold values can then be obtained by optimising the relevant formula. Numerical examples demonstrate that the proposed threshold policy is indeed optimal or extremely close to the optimal policy in a range of scenarios.

This paper investigates the production and preventive maintenance control problem in a discrete part manufacturing system. Three random processes, i.e. the production process, the demand arriving process and the machine failure/repair process, are considered. The unmet demands are fully backordered, which makes the system state space infinite. Two types of threshold policies are suggested to control the production and the preventive maintenance simultaneously. We derive an explicit form of the stationary distribution under such policies. The performance measures are then calculated and the optimal threshold parameters are obtained. Since the stationary distribution is derived independent of the form of the performance measures, the result is applicable in a wide range of situations (e.g. non-linear cost functions, stock-out probability (SP) requirements, buffer utilisation, multiple objective functions). In terms of minimising the long-run average cost, numerical examples showed that the threshold policies are indeed optimal or very close to the optimal policy, and are significantly better than the always-maintenance policy or the non-maintenance policy in a range of scenarios. The results also confirmed the intuition about which type of the threshold policies is preferred in which situation. The research in this paper may be interpreted in another way. In practice, we may face a problem to make decisions on whether to select a more reliable machine with less production capacity or a less reliable machine with more production capacity. The proposed two types of threshold policies can be easily applied to such situations. One limitation of the research is the assumption that the preventive maintenance actions are performed without a machine stoppage. Machine stoppage maintenance is an important type of preventive maintenance and deserves further research. The model may be extended to this type of maintenance by including additional machine modes, e.g. stoppage mode for preventive maintenance, more reliable operational mode, less reliable operational mode, and a failure mode. The machine may transition from the reliable mode into the less reliable mode. This problem can be formulated similarly. However, the derivation of the stationary distribution requires further research since the state space has to be augmented to include more states. Nevertheless, similar threshold policies can be constructed and evaluated at least numerically if not analytically. Moreover, extending the model to multi-machine or multi-product systems is also interesting.