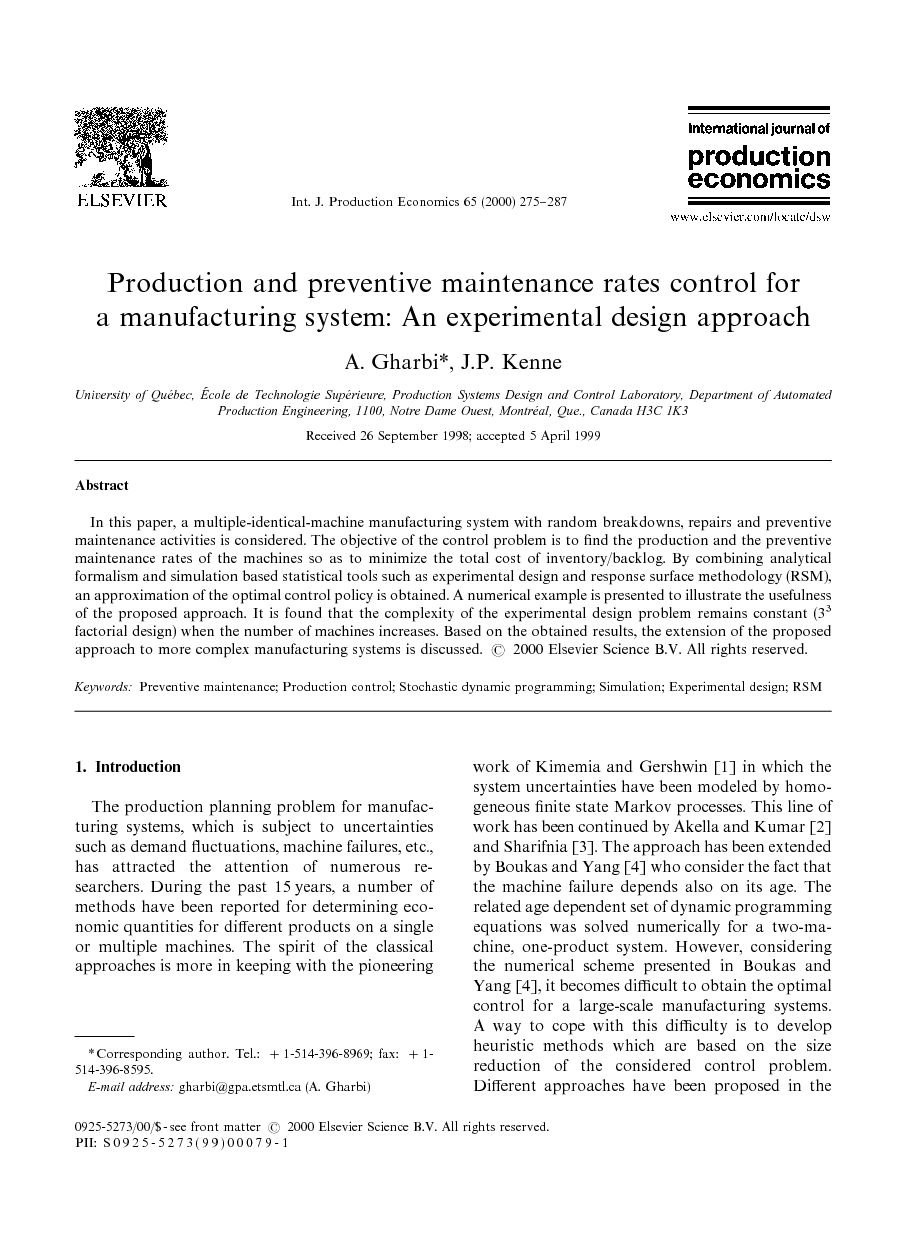 In this paper, a multiple-identical-machine manufacturing system with random breakdowns, repairs and preventive maintenance activities is considered. The objective of the control problem is to find the production and the preventive maintenance rates of the machines so as to minimize the total cost of inventory/backlog. By combining analytical formalism and simulation based statistical tools such as experimental design and response surface methodology (RSM), an approximation of the optimal control policy is obtained. A numerical example is presented to illustrate the usefulness of the proposed approach. It is found that the complexity of the experimental design problem remains constant (33 factorial design) when the number of machines increases. Based on the obtained results, the extension of the proposed approach to more complex manufacturing systems is discussed.

The production planning problem for manufacturing systems, which is subject to uncertainties such as demand fluctuations, machine failures, etc., has attracted the attention of numerous researchers. During the past 15 years, a number of methods have been reported for determining economic quantities for different products on a single or multiple machines. The spirit of the classical approaches is more in keeping with the pioneering work of Kimemia and Gershwin [1] in which the system uncertainties have been modeled by homogeneous finite state Markov processes. This line of work has been continued by Akella and Kumar [2] and Sharifnia [3]. The approach has been extended by Boukas and Yang [4] who consider the fact that the machine failure depends also on its age. The related age dependent set of dynamic programming equations was solved numerically for a two-machine, one-product system. However, considering the numerical scheme presented in Boukas and Yang [4], it becomes difficult to obtain the optimal control for a large-scale manufacturing systems. A way to cope with this difficulty is to develop heuristic methods which are based on the size reduction of the considered control problem. Different approaches have been proposed in the literature to derive simple near-optimal control policies of manufacturing systems. The concept of hedging point policy, introduced by Kimemia and Gershwin [1], is one of the simplest ways of finding near-optimal control policies for manufacturing systems. More precisely, such a policy suggests that when the machine is up, one should produce at the maximum possible rate when the inventory level is less than a given threshold, produce on the demand rate d if the inventory level is exactly equal to the threshold, and not produce at all if the inventory level exceeds the threshold. Further details on the concept of hedging point policy can be found in Akella and Kumar [2]. In addition, a modified version of such a policy, namely age-dependent hedging point policy is presented in Kenne and Gharbi [5]. Another approach is to develop a hierarchical control method using singular perturbation methods such as in Lehoczky et al. [6], Sethi et al. [7] and Kenne [8]. However, including the age-dependent failure rates of machines, the application of such approaches becomes very complex. This is due to the fact that although machines are initially identical, they have obviously different dynamics while producing. In this paper, we propose an alternative approach which consists of developing an optimization procedure to obtain the response surface model of the cost incurred in terms of parameters of a near-optimal control policy. The procedure is based on a series of simulation experiments and combines advantages of both analytical and simulation based models. Comparing this methodology with the “optimum numerical grid founding method” presented by Kenne et al. [9], this paper proposal is extracted from small number of simulation runs meanwhile its model includes significant main factors and interactions. The same approach was recently used by Ömer and Serpil [10] to explicitly examine the performance of a multi-item, multi-line, multi-stage JIT system under different factors settings. We studied the problem for a multiple-identical-machine, one-product manufacturing system considering machine-age-dependent down times. Further details on the concepts of experimental design and/or response surface methodology (RSM), used hereinafter, can be found in Kenne and Gharbi [5], Gharbi and Kenne [11] and Abdulnour et al. [12]. Optimization equations of the analytical model have generally a complex structure, and in the case of non-homogeneous processes, there is no explicit functional relationship between the performance criteria (i.e., incurred cost) and the independent variables of the model (i.e., stock and machines ages). In this paper a useful procedure which combines both the analytical control approach and the experimental design method is presented. Defining the control variables as parameters of a modified hedging point policy, which are also machine age dependent, their best values are given by minimizing the estimated relationship between the cost and these variables. Thus, the aim of the proposed approach is to provide the best values of the defined parameters in order to improve the control policies. These parameters are: (i) the stock level of finished goods, (ii) the oldest machine age at which it is necessary to send it to preventive maintenance, (iii) the oldest machine age under which a null stock level is needed. The paper is organized as follows. In Section 2, we present the notation and the problem statement of the considered production planning problem. The properties of the value function and also the best approximation of the optimal control policy for suitable values of parameters are given in Section 3. The control approach and the simulation model are demonstrated respectively in 4 and 5. The experimental design and response surface methodology are included in Section 6 while Section 7 concludes the paper.

A production control approach for manufacturing systems, based on simulation experiment is presented. We investigated the near-optimal control policy of a non-homogeneous Markov process, for which the concept of hedging point policy is still valid under some specifications. These specifications consist of parameters called in this paper the independent variables. A simulation model has been developed to describe the dynamic production problem using the machine-age-dependent hedging point policy. Then an experimental design was used to investigate the effects of specified factors on the cost incurred during the production horizon. The 33 factorial design was selected to identify the complication and to solve the analytical control problem. The proposed approach combines simulation and statistical analysis to provide the estimation of the cost function related to the considered control problem. A RSM was used to perform this function in terms of significant main factors and interactions given by the experimental approach. From the estimation of the cost function, the best values of control parameters have been computed. It is quite clear that this approach can also be applied to a system with stochastic demand and multiple products. Although, it has not been proven that the hedging point policy is still optimal for such a system, the proposed methodology can be used for obtaining a near-optimal control policy using the concept of machine-age hedging point policy.