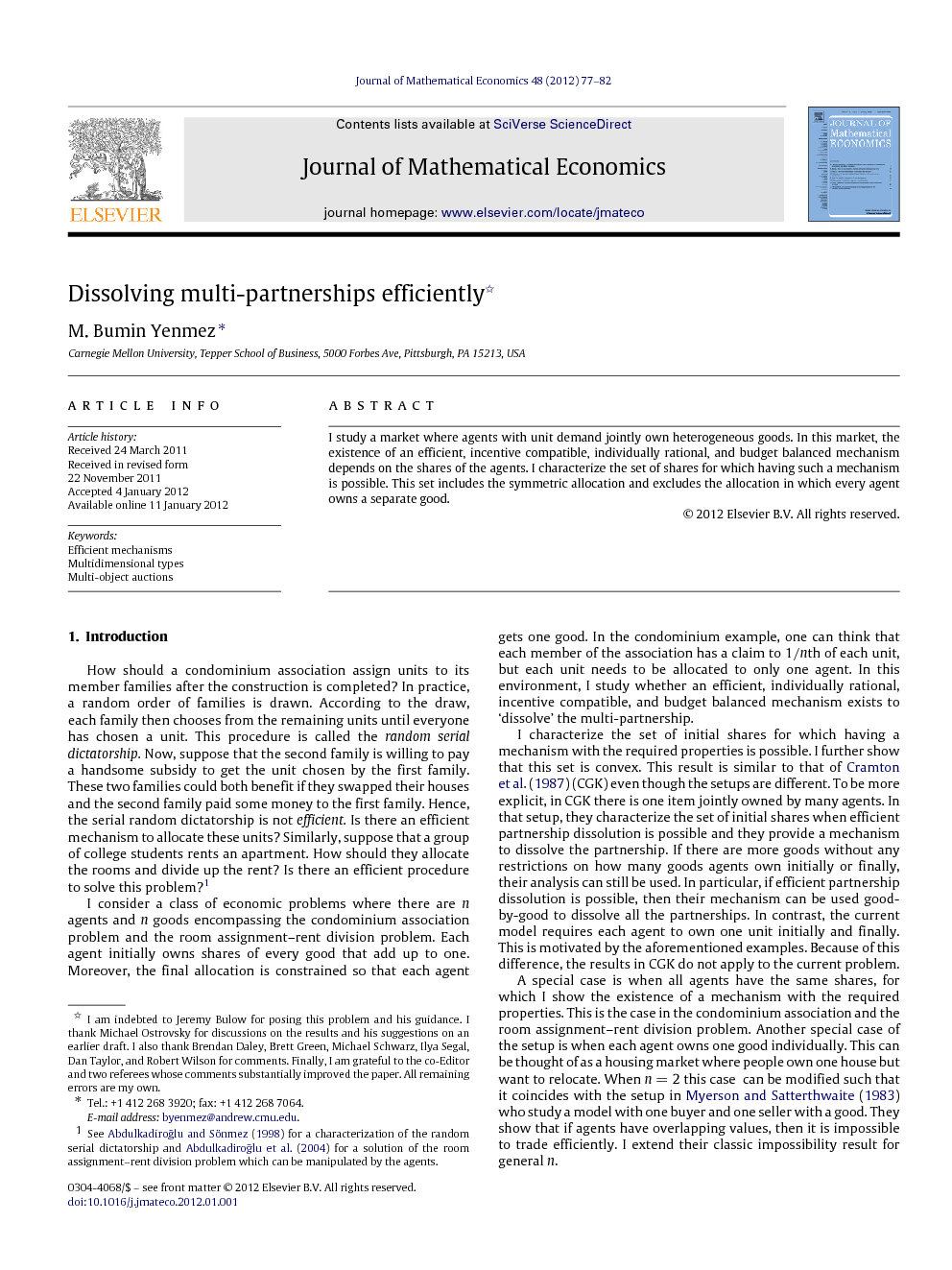 I study a market where agents with unit demand jointly own heterogeneous goods. In this market, the existence of an efficient, incentive compatible, individually rational, and budget balanced mechanism depends on the shares of the agents. I characterize the set of shares for which having such a mechanism is possible. This set includes the symmetric allocation and excludes the allocation in which every agent owns a separate good

How should a condominium association assign units to its member families after the construction is completed? In practice, a random order of families is drawn. According to the draw, each family then chooses from the remaining units until everyone has chosen a unit. This procedure is called the random serial dictatorship. Now, suppose that the second family is willing to pay a handsome subsidy to get the unit chosen by the first family. These two families could both benefit if they swapped their houses and the second family paid some money to the first family. Hence, the serial random dictatorship is not efficient. Is there an efficient mechanism to allocate these units? Similarly, suppose that a group of college students rents an apartment. How should they allocate the rooms and divide up the rent? Is there an efficient procedure to solve this problem?1 I consider a class of economic problems where there are nn agents and nn goods encompassing the condominium association problem and the room assignment–rent division problem. Each agent initially owns shares of every good that add up to one. Moreover, the final allocation is constrained so that each agent gets one good. In the condominium example, one can think that each member of the association has a claim to 1/n1/nth of each unit, but each unit needs to be allocated to only one agent. In this environment, I study whether an efficient, individually rational, incentive compatible, and budget balanced mechanism exists to ‘dissolve’ the multi-partnership. I characterize the set of initial shares for which having a mechanism with the required properties is possible. I further show that this set is convex. This result is similar to that of Cramton et al. (1987) (CGK) even though the setups are different. To be more explicit, in CGK there is one item jointly owned by many agents. In that setup, they characterize the set of initial shares when efficient partnership dissolution is possible and they provide a mechanism to dissolve the partnership. If there are more goods without any restrictions on how many goods agents own initially or finally, their analysis can still be used. In particular, if efficient partnership dissolution is possible, then their mechanism can be used good-by-good to dissolve all the partnerships. In contrast, the current model requires each agent to own one unit initially and finally. This is motivated by the aforementioned examples. Because of this difference, the results in CGK do not apply to the current problem. A special case is when all agents have the same shares, for which I show the existence of a mechanism with the required properties. This is the case in the condominium association and the room assignment–rent division problem. Another special case of the setup is when each agent owns one good individually. This can be thought of as a housing market where people own one house but want to relocate. When n=2n=2 this case can be modified such that it coincides with the setup in Myerson and Satterthwaite (1983) who study a model with one buyer and one seller with a good. They show that if agents have overlapping values, then it is impossible to trade efficiently. I extend their classic impossibility result for general nn. The method used in this paper builds on the results of two lines of research. One is the revenue equivalence condition in the presence of multidimensional signals: Krishna and Maenner (2001) and Jehiel et al. (1999) prove it for general cases which admit my setup as a special case. The second line of research, using the revenue equivalence condition, gives a necessary and sufficient condition for the implementation of an allocation rule; see Makowski and Mezzetti (1994), Krishna and Perry (1998), Williams (1999) and Fieseler et al. (2003) for example. I use the same technique in this paper. The execution of the technique is not straightforward, because in a setup with multiple dimensional types one needs to calculate which type of an agent gives that agent the minimum expected utility at the interim stage when each agent only knows their type. I provide a characterization by proving bijectivity of a carefully chosen function. Moreover, even after these types are calculated one needs to verify an inequality involving them which is, a priori, not trivial. In an independent work, Gershkov and Schweinzer (2010) analyze a queueing problem where agents have the same value for a service provided with differing waiting costs. They show that if the access rights to the service is a random order, then the efficient trading is possible whereas a deterministic order makes it impossible. Although their problem is different, the intuition for their results and mine are similar. Subsequently, Segal and Whinston (2011) study incentive compatible mechanisms in a general model. They show that if the expectation of the equilibrium allocation is equal to the status quo allocation then individual rationality is satisfied. In particular, if the allocation rule is efficient, then efficiency is attained along with individual rationality and incentive compatibility. In the current model, this translates to the positive result that efficient trading is possible when initial shares are symmetric. However, in contrast to the current study, they do not analyze what happens when the status quo is different from the expected equilibrium allocation. The rest of the paper is organized as follows. Section 2 introduces the model. Section 3 states a necessary and sufficient condition to have a mechanism with the required properties. Section 4 analyzes this condition for different initial shares. The last section summarizes the paper and outlines future research directions.

This paper studies whether an EF, IIC, IIR, and BB mechanism exists in a market with jointly owned heterogenous goods. Agents trade subject to the constraint that each one ends up with one good. By a revenue equivalence condition a VCG mechanism can be analyzed without losing any generality. Then a necessary and sufficient condition is given to have a mechanism with the required properties. Using this condition it is shown that the set of initial shares for which it is possible to have such a mechanism is a non-empty and convex set. The condition about the initial and final shares that each agent owns one good is crucial. If this condition is relaxed by allowing agents to own any shares initially and finally, then the multi-partnership can be dissolved good-by-good using the mechanism in Cramton et al. (1987) for some initial shares. On the other hand, under the condition that we consider the results in Cramton et al. (1987) cannot be applied. For future research one could allow interdependent valuations for the goods. This could arise naturally in situations where agents have private information over some of the goods, which also affect the valuations of the other agents.