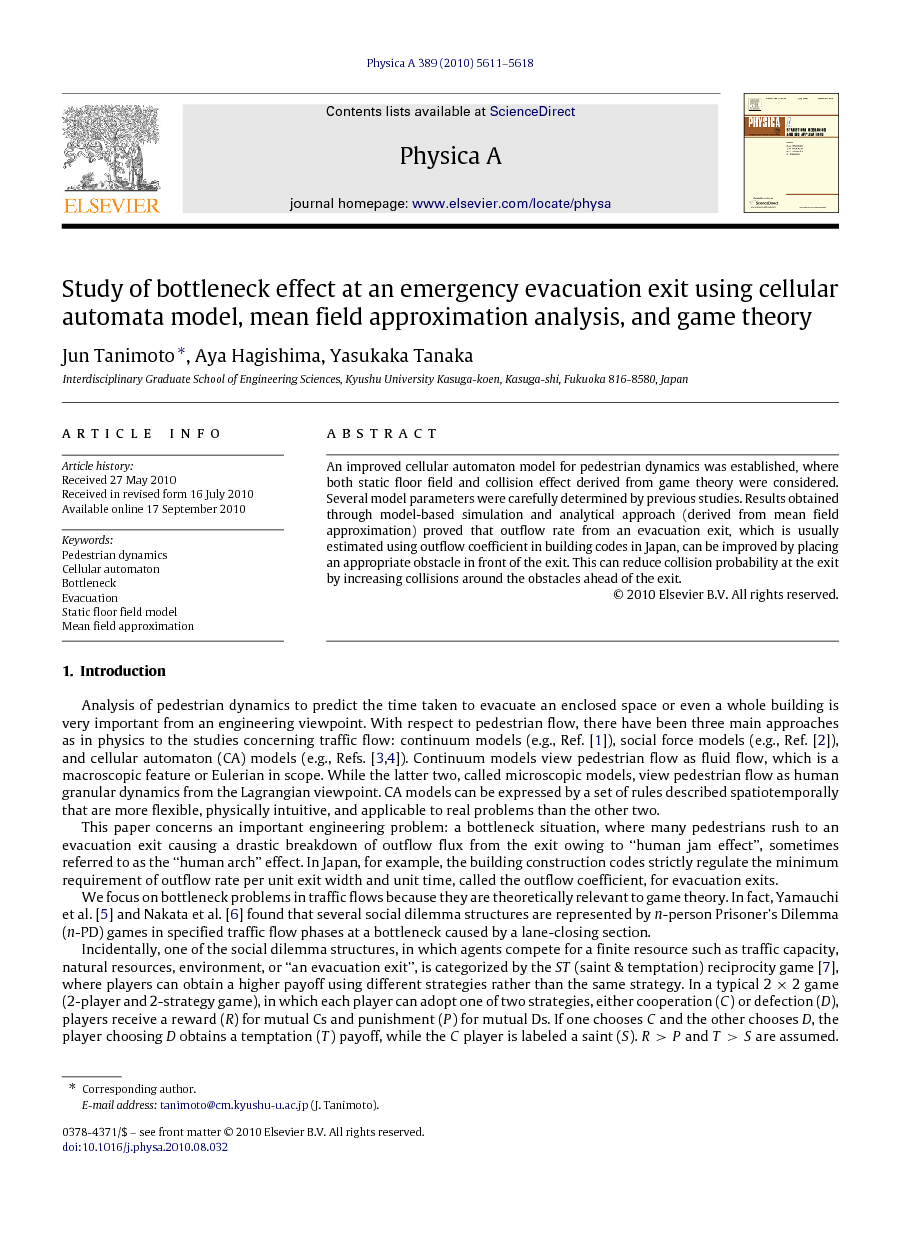 An improved cellular automaton model for pedestrian dynamics was established, where both static floor field and collision effect derived from game theory were considered. Several model parameters were carefully determined by previous studies. Results obtained through model-based simulation and analytical approach (derived from mean field approximation) proved that outflow rate from an evacuation exit, which is usually estimated using outflow coefficient in building codes in Japan, can be improved by placing an appropriate obstacle in front of the exit. This can reduce collision probability at the exit by increasing collisions around the obstacles ahead of the exit.

Analysis of pedestrian dynamics to predict the time taken to evacuate an enclosed space or even a whole building is very important from an engineering viewpoint. With respect to pedestrian flow, there have been three main approaches as in physics to the studies concerning traffic flow: continuum models (e.g., Ref. [1]), social force models (e.g., Ref. [2]), and cellular automaton (CA) models (e.g., Refs. [3] and [4]). Continuum models view pedestrian flow as fluid flow, which is a macroscopic feature or Eulerian in scope. While the latter two, called microscopic models, view pedestrian flow as human granular dynamics from the Lagrangian viewpoint. CA models can be expressed by a set of rules described spatiotemporally that are more flexible, physically intuitive, and applicable to real problems than the other two. This paper concerns an important engineering problem: a bottleneck situation, where many pedestrians rush to an evacuation exit causing a drastic breakdown of outflow flux from the exit owing to “human jam effect”, sometimes referred to as the “human arch” effect. In Japan, for example, the building construction codes strictly regulate the minimum requirement of outflow rate per unit exit width and unit time, called the outflow coefficient, for evacuation exits. We focus on bottleneck problems in traffic flows because they are theoretically relevant to game theory. In fact, Yamauchi et al. [5] and Nakata et al. [6] found that several social dilemma structures are represented by nn-person Prisoner’s Dilemma (nn-PD) games in specified traffic flow phases at a bottleneck caused by a lane-closing section. Incidentally, one of the social dilemma structures, in which agents compete for a finite resource such as traffic capacity, natural resources, environment, or “an evacuation exit”, is categorized by the ST (saint & temptation) reciprocity game [7], where players can obtain a higher payoff using different strategies rather than the same strategy. In a typical 2×2 game (2-player and 2-strategy game), in which each player can adopt one of two strategies, either cooperation (CC) or defection (DD), players receive a reward (RR) for mutual Cs and punishment (PP) for mutual Ds. If one chooses CC and the other chooses DD, the player choosing DD obtains a temptation (TT) payoff, while the CC player is labeled a saint (SS). are assumed. If 2R<S+T2R<S+T is valid in a game, agents are requested to establish ST reciprocity to avoid a dilemma-trapped situation. ST reciprocity might be relevant to our problem because a severe human arch occurs if pedestrians use the same strategy, “going ahead” simultaneously, while it does not occur if one tries to go ahead and the other yields. Meanwhile, empirical and engineering knowledge indicate that the outflow rate from an exit is much better if appropriate obstacles are placed around the exit (e.g., Ref. [4]). At first glance, this seems contrary to common knowledge because an obstacle increases the flow rate rather than producing friction. We can now illustrate how this paradoxical phenomenon might be possible; since the obstacles make collisions happen before the exit, they can appropriately control the flow to avoid heavy jams at the exit, which is principally based on ST reciprocity. This paper deals with the paradoxical phenomenon caused by the bottleneck effect, in which our approach of using CA simulation and mean field analysis dovetails with game theory. The CA model established is based on the static floor field (SFF) [4], [8], [9], [10], [11], [12] and [13] and a stochastic concept related to statistical mechanics for analyzing the agent’s dynamics.

To determine the analogy between the bottleneck problems of pedestrian evacuation from a space and ST reciprocity in game theory, we built a cellular automata model based on SFF considering the agents’ collision effect, whose model parameters were determined using the results from previous works. A deductive approach using the mean field approximation revealed that placing an obstacle might improve the outflow coefficient at an evacuation exit by breaking the human arch, which can reduce collisions significantly. A series of simulations with varying obstacle geometries clarified that there might be possibilities to both improve and decrease the outflow flux at the exit depending on the obstacle geometry. The extent to which an obstacle lowers the collision probability at the evacuation exit determines the magnitude of improvement to the flow.