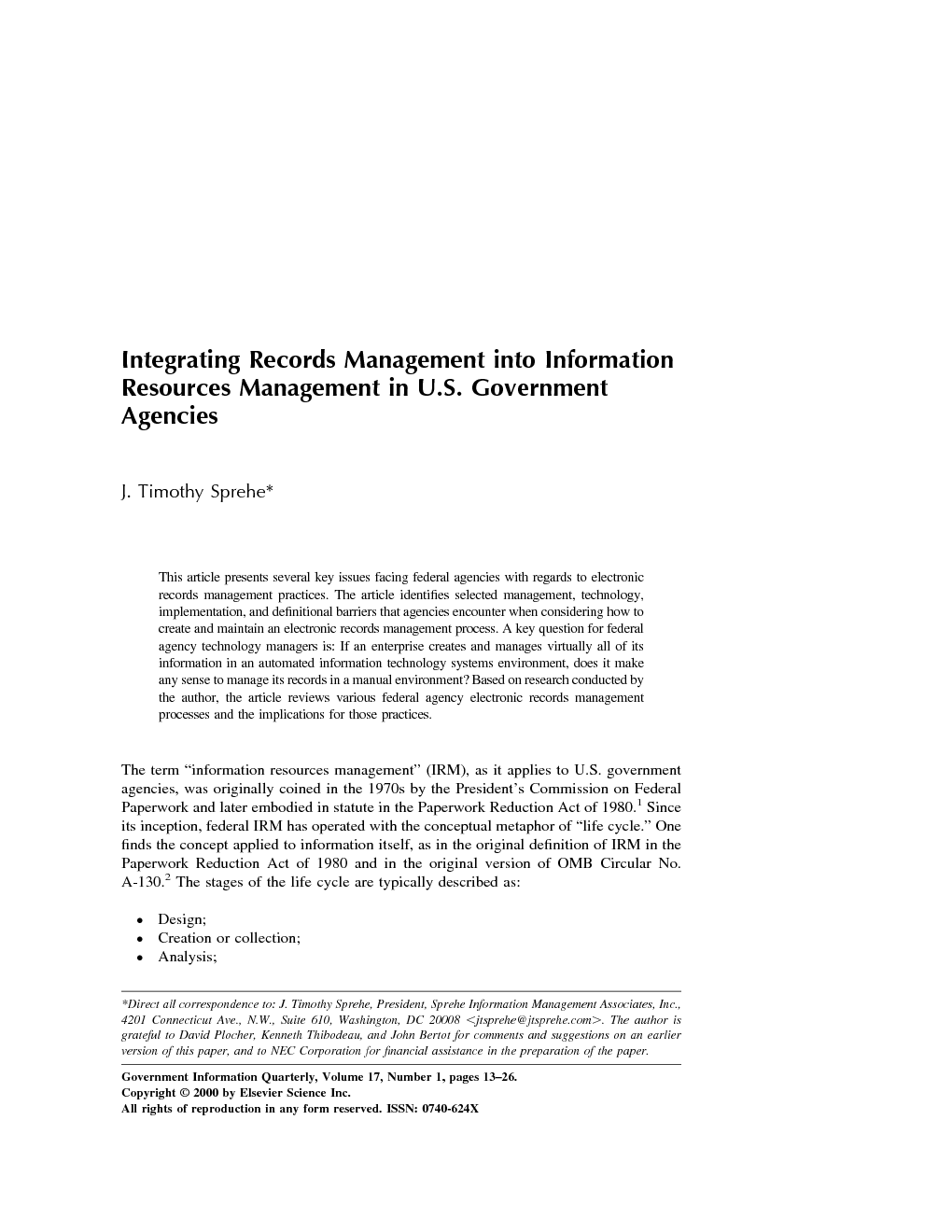 The advent of electronic RMAs and the incorporation of records management into the automated office environment has potentially profound consequences for federal IRM. The statutory definition of IRM found in the original Paperwork Reduction Act of 1980 and echoed in the 1985 OMB Circular No. A-130, Management of Federal Information Resources,17 was a bifurcated concept. IRM was two things: • The management of information considered as a resource; and • The management of those resources associated with information, such as computers, telecommunications, personnel, and funds. Federal IRM has lived throughout its brief history with the curse of this bifurcation. Although agency managers might give lip service to the primacy of information management as the essence of IRM, resources have flowed overwhelmingly to IT management. Typically, the senior-most IRM official, today called the Chief Information Officer (CIO), came from a background of IT management and spent most of his or her career with the acquisition and management of IT. The vast majority of IRM dollars went to IT acquisition and management. Information management typically referred to the duties of an agency’s Privacy Act officer, Freedom of Information Act officer, paperwork control official, and records officer, four sets of duties usually relegated to lower ranking personnel. As the demand for greater information dissemination to the public grew in the 1980s and hyper-accelerated with the advent of the Internet in the 1990s, information management began to occupy more of the time and attention of agency CIOs, intruding on the primacy of IT management. The 1995 amendments to the Paperwork Reduction Act particularly placed emphasis on information dissemination, adding responsibilities in this area both to the duties of the Director of the Office of Management and Budget (OMB) and to agency heads. Congress, in effect, widened the missions of all federal agencies to include attention to information dissemination. Initiatives such as the Vice President’s National Performance Review accentuated the message. Electronic records management’s arrival onstage has occurred somewhat independent from the new emphasis on dissemination, driven more by Iran-Contra and the court decisions. Whatever the historical causality, the integration of information management and IT management in federal agencies is finally being forced. Once electronic RMAs are incorporated into an agency’s IRM environment, the following propositions are truer than ever before: • It is no longer possible to plan and manage the life cycle of information without taking into account the life cycle of the IT system in which the information resides. • It is no longer possible to plan and manage the life cycle of an IT system without taking into account the life cycle of the information residing in the system. What evidence presents itself for these assertions? As an example, consider the study of digital imaging standards completed in 1999 by Lockheed Martin on behalf of NARA and DoD.18 Following are excerpts from the executive summary of the study; The use of computers is changing the way government documents are created, accessed and managed. Electronic records, the Internet and E-mail have become an increasingly large part of the everyday work environment. To improve access, distribution, and interoperability, Federal agencies are converting large numbers of documents from paper to electronic digital images. … Long-term preservation of digitally imaged records has become problematic for Federal records requiring permanent retention. While the advantages of digitally imaged documents are tremendous, due to the relatively short life cycle of digital image technology (both hardware and software), it is commonly accepted that all formats used today will eventually become obsolete. … For an electronic record long term preservation requires that as the technology changes that the record be migrated from one format to another and then verified to ensure no loss of data. … Plan and budget for migration of digital images every 3–5 years with cost equivalent to 50–100% of the costs associated with original imaging project. [emphasis added] These quotations were selected to make a point. The point is that the study tells federal IT managers to change their thinking about information system planning because of the nature of their information management responsibilities. The logic and economies of today’s IT capabilities drive agencies toward digitization of information, but the nature of records management forges an indissoluble link between information management and IT management. Yes, an agency realizes economies and efficiencies by automating its information management. But the agency also incurs new and perhaps unanticipated IT management costs by the same token. To restate the propositions: information management and IT management must occur in an integrated framework in today’s office environment. Records management requirements are only a reflection of the need for an agency to manage its information holdings efficiently and effectively. This realization gives new weight to dicta records managers have been uttering for years. Archivists have long preached that the time to plan for records management is at the point when IT systems are being designed; that is, at the beginning of the system life cycle, not at the end. Failure to plan and budget for proper information (read: records) management at the outset of the system life cycle leads to far greater costs at the end of the cycle and/or the failure to carry out statutory records management responsibilities altogether.