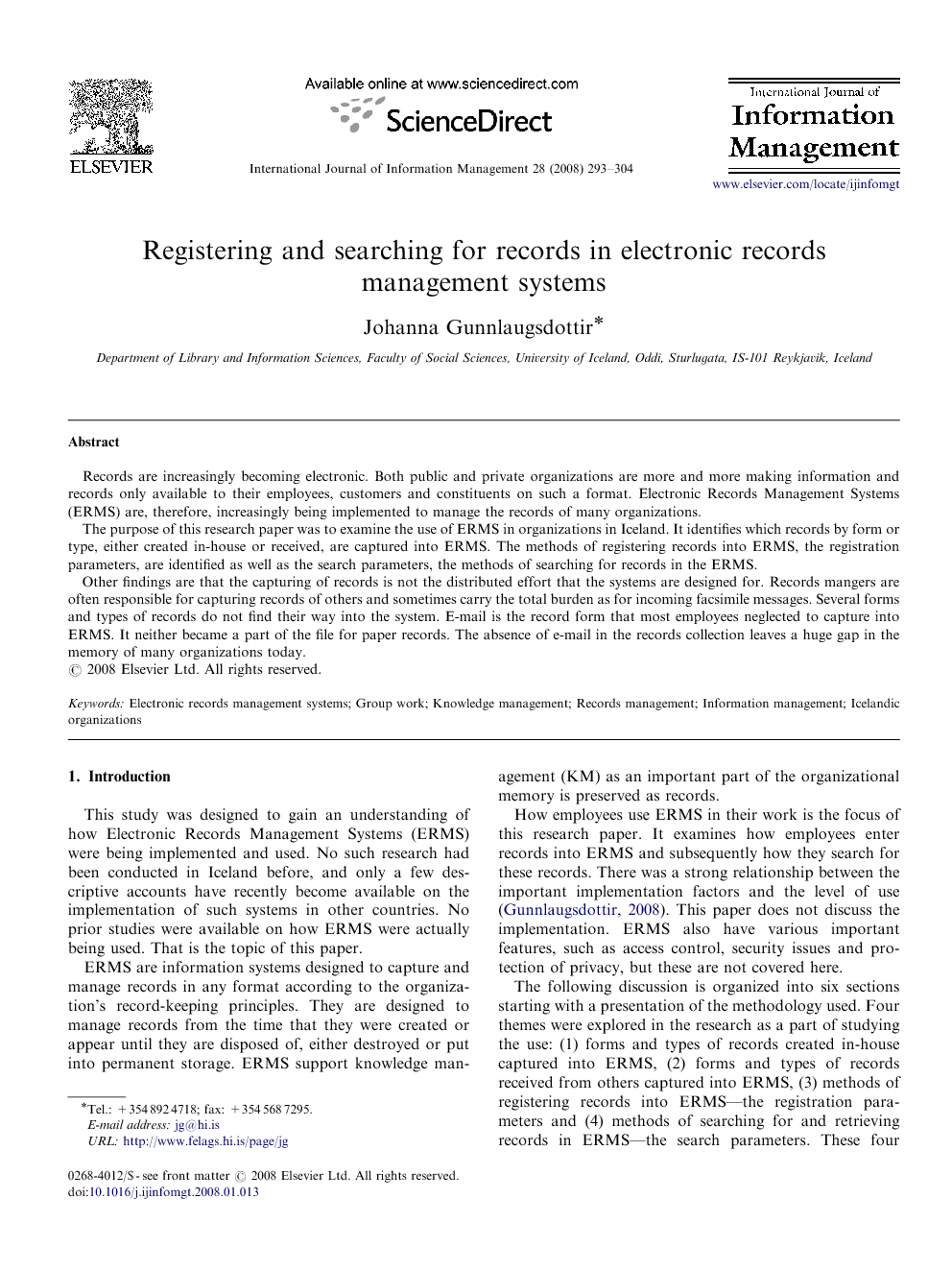 Records are increasingly becoming electronic. Both public and private organizations are more and more making information and records only available to their employees, customers and constituents on such a format. Electronic Records Management Systems (ERMS) are, therefore, increasingly being implemented to manage the records of many organizations. The purpose of this research paper was to examine the use of ERMS in organizations in Iceland. It identifies which records by form or type, either created in-house or received, are captured into ERMS. The methods of registering records into ERMS, the registration parameters, are identified as well as the search parameters, the methods of searching for records in the ERMS. Other findings are that the capturing of records is not the distributed effort that the systems are designed for. Records mangers are often responsible for capturing records of others and sometimes carry the total burden as for incoming facsimile messages. Several forms and types of records do not find their way into the system. E-mail is the record form that most employees neglected to capture into ERMS. It neither became a part of the file for paper records. The absence of e-mail in the records collection leaves a huge gap in the memory of many organizations today.

This study was designed to gain an understanding of how Electronic Records Management Systems (ERMS) were being implemented and used. No such research had been conducted in Iceland before, and only a few descriptive accounts have recently become available on the implementation of such systems in other countries. No prior studies were available on how ERMS were actually being used. That is the topic of this paper. ERMS are information systems designed to capture and manage records in any format according to the organization's record-keeping principles. They are designed to manage records from the time that they were created or appear until they are disposed of, either destroyed or put into permanent storage. ERMS support knowledge management (KM) as an important part of the organizational memory is preserved as records. How employees use ERMS in their work is the focus of this research paper. It examines how employees enter records into ERMS and subsequently how they search for these records. There was a strong relationship between the important implementation factors and the level of use (Gunnlaugsdottir, 2008). This paper does not discuss the implementation. ERMS also have various important features, such as access control, security issues and protection of privacy, but these are not covered here. The following discussion is organized into six sections starting with a presentation of the methodology used. Four themes were explored in the research as a part of studying the use: (1) forms and types of records created in-house captured into ERMS, (2) forms and types of records received from others captured into ERMS, (3) methods of registering records into ERMS—the registration parameters and (4) methods of searching for and retrieving records in ERMS—the search parameters. These four themes are covered in 3, 4, 5 and 6. The paper concludes with a discussion of the findings.