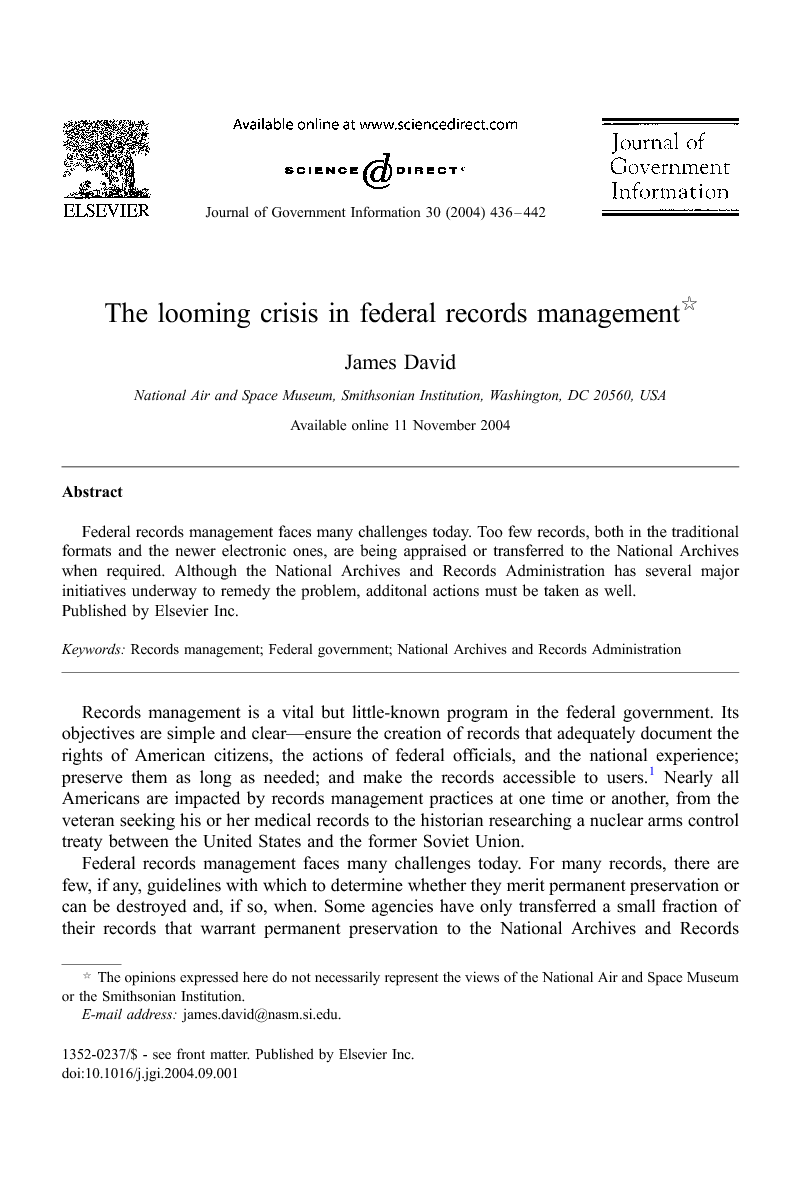 Federal records management faces many challenges today. Too few records, both in the traditional formats and the newer electronic ones, are being appraised or transferred to the National Archives when required. Although the National Archives and Records Administration has several major initiatives underway to remedy the problem, additonal actions must be taken as well.

Both the Records Disposal Act and the Federal Records Act of 1950 require agencies to prepare records that adequately document their organization, functions, policies, decisions, procedures, and essential transactions; denominate all such records as federal records and decree that the government owns them; provide procedures for their preservation and disposition; and specify that they may not be removed or destroyed except as provided in the acts. The statutes also mandate that agency heads establish and maintain an active records management program and that NARA provide assistance and guidance to the agencies in this regard.2 At the center of the requirement to preserve and dispose of records are records retention and disposition schedules (records schedules). All federal records must be covered by a records schedule. NARA has issued General Records Schedules that provide disposal authority for certain personnel, accounting, and other records common to all agencies. Approximately, one third of all federal records are subject to General Records Schedules. Each agency is required to develop records schedules covering all their other federal records. Agencies send their draft records schedules to NARA for review and approval. Once approved, they provide mandatory guidance to NARA and agency personnel on whether each file series covered by the records schedule is to be appraised as permanent (to be kept forever) or temporary (to be destroyed at a specified date or event). When agencies create new file series or wish to change their current records schedules, they are obligated to develop and submit new draft records schedules for approval. Records awaiting appraisal are denominated unappraised.3 Compliance with these laws has unfortunately varied through the years. Some agencies have had excellent records management programs for years, while others have not. For example, the Joint Chiefs of Staff (established in 1947) did not adopt its first records schedule until 1980,4 and the National Reconnaissance Office (established in 1961) did not develop its first one until 1996.5 The Federal Bureau of Investigation (established in 1908) prepared its first records schedule in 1970, but it only covered a limited number of records. Because of continued concerns about unauthorized destruction of records, a lawsuit was filed against NARA and the agency in 1980, and under court supervision comprehensive records schedules were finally promulgated.6 The critical question in these cases is exactly what records were destroyed and what guided the agencies in making this decision. Unfortunately, there are no real answers. Federal law also requires the eventual transfer to the National Archives of all permanent records, and records schedules specify when they are eligible for transfer. Most set the transfer date at 30 years, but longer retention periods are permitted.7 For example, the Office of the Secretary of Defense has a 40-year retention period for permanent records of high-level officials and advisory groups (it is 30 years for all others). Central Intelligence Agency (CIA), National Security Agency (NSA), and Federal Bureau of Investigation (FBI) records schedules establish a 50-year retention period for virtually all their permanent records. A Joint Chiefs of Staff/Unified Commands records schedule approved by NARA in 2002 provides, in part, that certain types of permanent intelligence collection, dissemination, and production records are to be transferred “to NARA when 50 years old, after declassification review.”8 It is important to note that this does not mean that all permanent records are transferred to the National Archives at their eligibility date. For example, not all permanent records from 1952 with a 30-year retention period were transferred to the National Archives in 1982. Why is this? Every record is in a collection (whether totaling one box or one thousand boxes), and what triggers the eligibility date of the collection is the retention period added to the date of the most recent document therein. The following two examples illustrate this. In Record Group 59 at the Federal records center in Suitland, Maryland, there is an accession of classified State Department Office of Legal Adviser records from 1922 to 1983 concerning chemical and biological warfare. The retention period is 30 years, and the records are thus first eligible for transfer to the National Archives in 2013. In Record Group 330 at the same facility, there is an accession of records of the Office of the Secretary of Defense's Vietnam Task Force that contains a wide variety of War Department, Navy Department, State Department, Department of Defense, and CIA records from 1940 to 1968 (the documents were apparently used in writing The Pentagon Papers). The retention period is 40 years, and the records are thus first eligible for transfer to the National Archives in 2008. These, unfortunately, are not isolated cases. Moreover, even if permanent records are eligible for transfer, the agency must consent to it, and there have been occasions when this consent has not been given. Finally, records that have never been appraised, but should be permanent, will of course not be transferred until such time as they are so appraised and the retention period has passed. For those interested in reviewing records schedules, some are in the records management section of the NARA home page, and others are on agency home pages. Most are also available in hard copy at some National Archives and Federal records centers. However, the public cannot access CIA and NSA records schedules because they are classified.9 Notices of proposed records schedules are in the Federal Register, and the public can contact NARA for copies of these and any accompanying appraisal memorandums