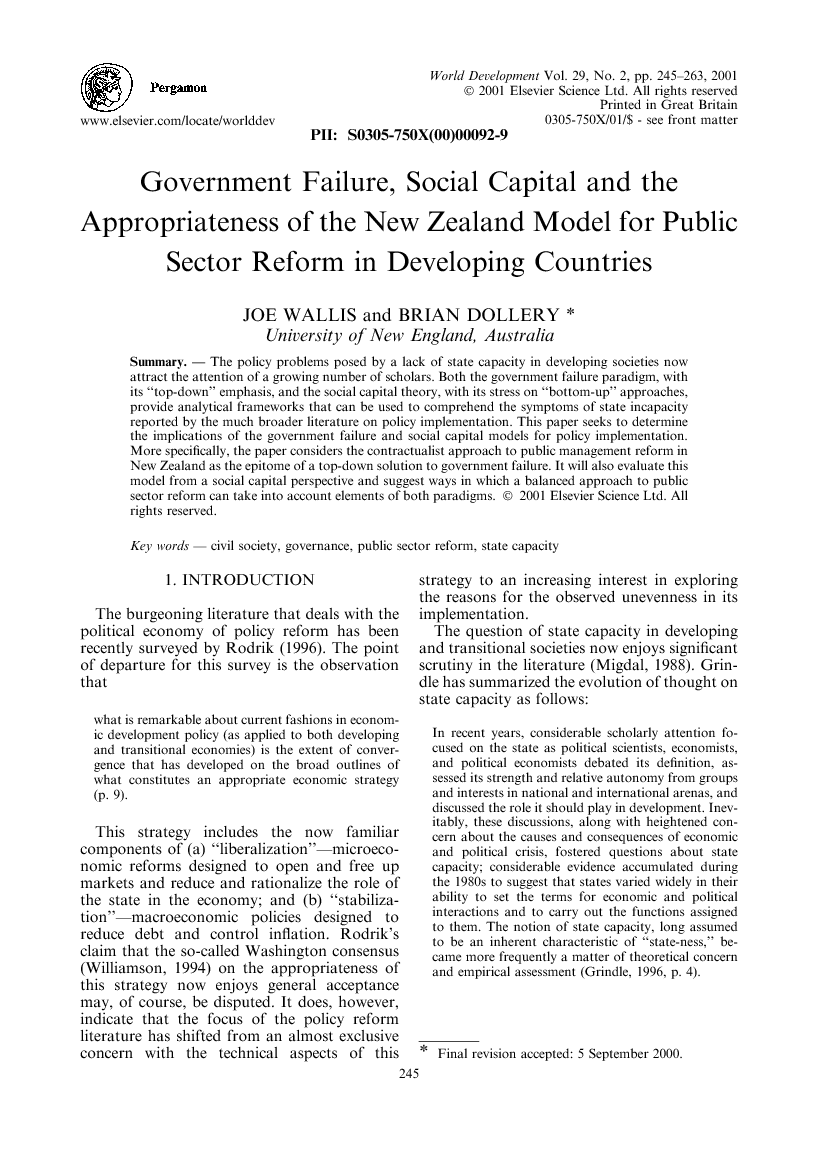 The policy problems posed by a lack of state capacity in developing societies now attract the attention of a growing number of scholars. Both the government failure paradigm, with its “top-down” emphasis, and the social capital theory, with its stress on “bottom-up” approaches, provide analytical frameworks that can be used to comprehend the symptoms of state incapacity reported by the much broader literature on policy implementation. This paper seeks to determine the implications of the government failure and social capital models for policy implementation. More specifically, the paper considers the contractualist approach to public management reform in New Zealand as the epitome of a top-down solution to government failure. It will also evaluate this model from a social capital perspective and suggest ways in which a balanced approach to public sector reform can take into account elements of both paradigms.

This paper has essentially argued that while the New Zealand model may offer a coherent and comprehensive package of contractual solutions to pervasive problems of government failure, the logic of its hard-edged contractualism may hinder the development of the social capital required to enhance the state's capacity in areas where a bottom-up approach to policy implementation is required. What other models, then, can reformers draw on to enhance administrative capacity in developing countries? Peters (1996) suggests that in addition to the “market model for reforming government” which has been followed in New Zealand, there are, at least, four other distinct visions of governance: the “old time religion” of PPA; and newer models of the “participatory state”; “flexible government” and “deregulated government.” We would suggest that an appropriate strategy of administrative reform in developing countries should combine a mix of “old” and “new.” We would endorse Schick's view that “significant progress can be made through a logical sequence of steps that diminish the scope of informality while building managerial capacity, confidence and experience” (1998, p. 129). There would still seem to be considerable scope in developing countries to fill in the gaps of the type of rule-based system of external controls that is associated with PPA. As Schick has observed: Politicians and officials must concentrate on the basic process of public management. They must be able to control inputs before they are called upon to control outputs; they must be able to account for cash before they are asked to account for cost; they must abide by uniform rules before they are authorized to make their own rules; they must operate in integrated, centralized departments before being authorized to go it alone in autonomous agencies (Schick, 1996, p. 130). In those areas where these basics have been mastered, there may be scope to shift from systems of external to internal control so that managers can be given broader discretion as the focus shifts from “ex ante control to ex post audit, from control of individual actions to control within a broad band, from reviewing specific actions to reviewing systems” (Schick, 1998, p. 131). Within a system of internal control there would seem to be scope for both New Zealand style contractualism and a social capital-based style of catalytic, participatory governance. The relative appropriateness of the two models would depend on whether conditions favor the application of a top-down or bottom-up approach to enhancing implementation capacity. In those policy areas where policy formation, funding and service delivery can be undertaken by separate agencies operating within a vertical line of accountability, a top-down, contractualist approach may strengthen accountability and reduce the scope for agency failure. But in those areas where multiple agencies, community groups and nongovernment organizations need to work together to solve common problems, the development of networks of civil engagement bound together by trust and reciprocity should be a priority. To play a catalytic role in forming these networks, government officials do not just need to have a reputation for financial probity. They also need to exercise democratic leadership skills to bring isolated, conflicting groups together in a way that fosters social cohesion.