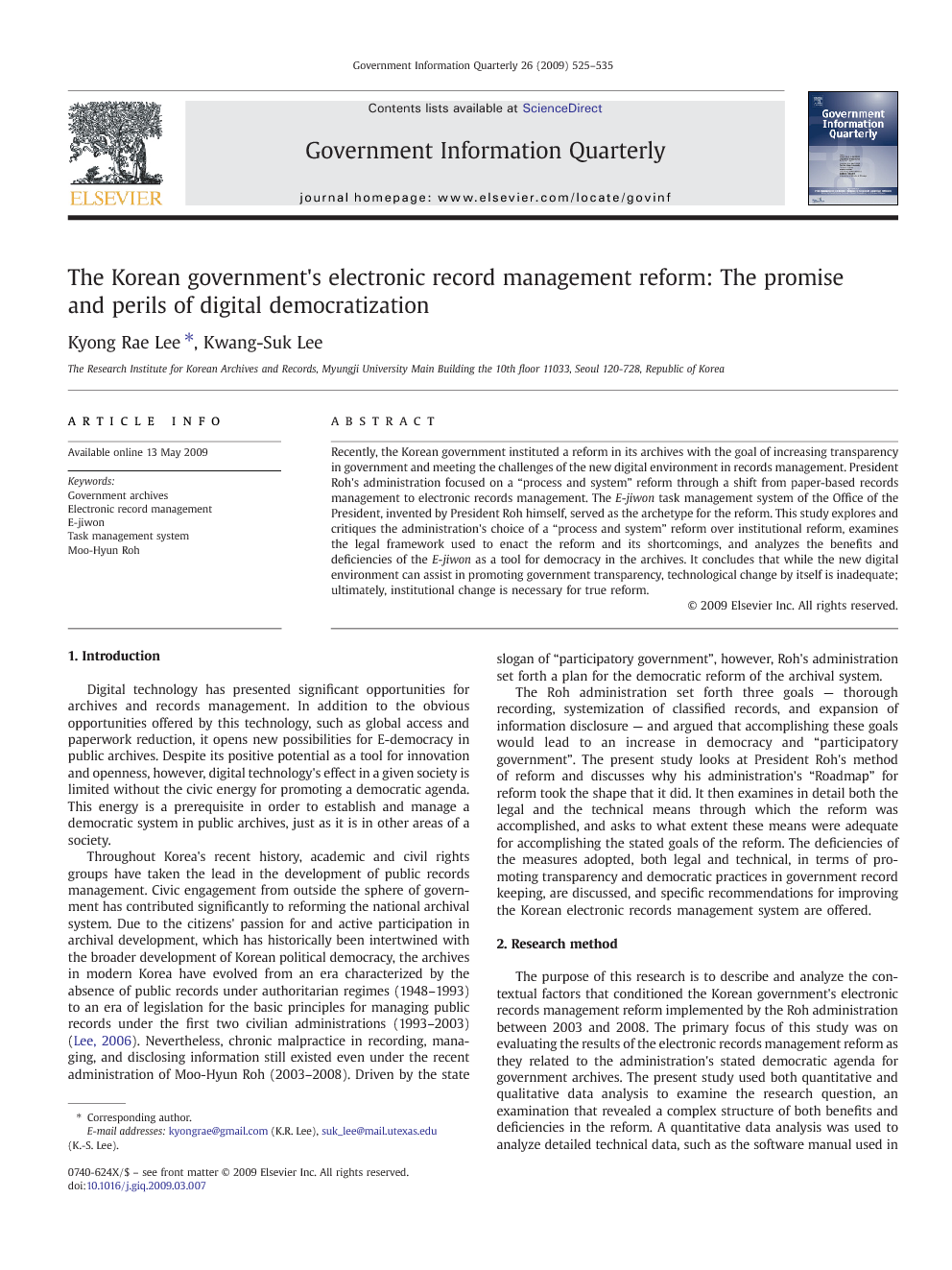 Recently, the Korean government instituted a reform in its archives with the goal of increasing transparency in government and meeting the challenges of the new digital environment in records management. President Roh's administration focused on a “process and system” reform through a shift from paper-based records management to electronic records management. The E-jiwon task management system of the Office of the President, invented by President Roh himself, served as the archetype for the reform. This study explores and critiques the administration's choice of a “process and system” reform over institutional reform, examines the legal framework used to enact the reform and its shortcomings, and analyzes the benefits and deficiencies of the E-jiwon as a tool for democracy in the archives. It concludes that while the new digital environment can assist in promoting government transparency, technological change by itself is inadequate; ultimately, institutional change is necessary for true reform.

Digital technology has presented significant opportunities for archives and records management. In addition to the obvious opportunities offered by this technology, such as global access and paperwork reduction, it opens new possibilities for E-democracy in public archives. Despite its positive potential as a tool for innovation and openness, however, digital technology's effect in a given society is limited without the civic energy for promoting a democratic agenda. This energy is a prerequisite in order to establish and manage a democratic system in public archives, just as it is in other areas of a society. Throughout Korea's recent history, academic and civil rights groups have taken the lead in the development of public records management. Civic engagement from outside the sphere of government has contributed significantly to reforming the national archival system. Due to the citizens' passion for and active participation in archival development, which has historically been intertwined with the broader development of Korean political democracy, the archives in modern Korea have evolved from an era characterized by the absence of public records under authoritarian regimes (1948–1993) to an era of legislation for the basic principles for managing public records under the first two civilian administrations (1993–2003) (Lee, 2006). Nevertheless, chronic malpractice in recording, managing, and disclosing information still existed even under the recent administration of Moo-Hyun Roh (2003–2008). Driven by the state slogan of “participatory government”, however, Roh's administration set forth a plan for the democratic reform of the archival system. The Roh administration set forth three goals — thorough recording, systemization of classified records, and expansion of information disclosure — and argued that accomplishing these goals would lead to an increase in democracy and “participatory government”. The present study looks at President Roh's method of reform and discusses why his administration's “Roadmap” for reform took the shape that it did. It then examines in detail both the legal and the technical means through which the reform was accomplished, and asks to what extent these means were adequate for accomplishing the stated goals of the reform. The deficiencies of the measures adopted, both legal and technical, in terms of promoting transparency and democratic practices in government record keeping, are discussed, and specific recommendations for improving the Korean electronic records management system are offered. 2. Research method The purpose of this research is to describe and analyze the contextual factors that conditioned the Korean government's electronic records management reform implemented by the Roh administration between 2003 and 2008. The primary focus of this study was on evaluating the results of the electronic records management reform as they related to the administration's stated democratic agenda for government archives. The present study used both quantitative and qualitative data analysis to examine the research question, an examination that revealed a complex structure of both benefits and deficiencies in the reform. A quantitative data analysis was used to analyze detailed technical data, such as the software manual used in the operation of the E-jiwon, the electronic Records Management System (RMS) of the Office of the President (OP) of Korea. As a “regulating code” (Lessig, 1999) of the electronic records management system, the technical requirements had to be analyzed in order to understand fully the political implications of the digital medium for the Korean government's records management system. A qualitative data analysis was used to analyze provisions of Korean legislation and to explore the research theme in a comprehensive manner, by means of archival data. Through analyzing the Enforcement Ordinance (EO) of the Public Records Management Act (PRMA) and the new Presidential Records Act (PRA) since their passage in 2007, the present study shows how the laws function as a “literacy warrant” (University of Pittsburgh, 1996) guiding the Korean government's electronic records management reform; the study also offers policy suggestions about how to realize the Korean government's reform in electronic records management.