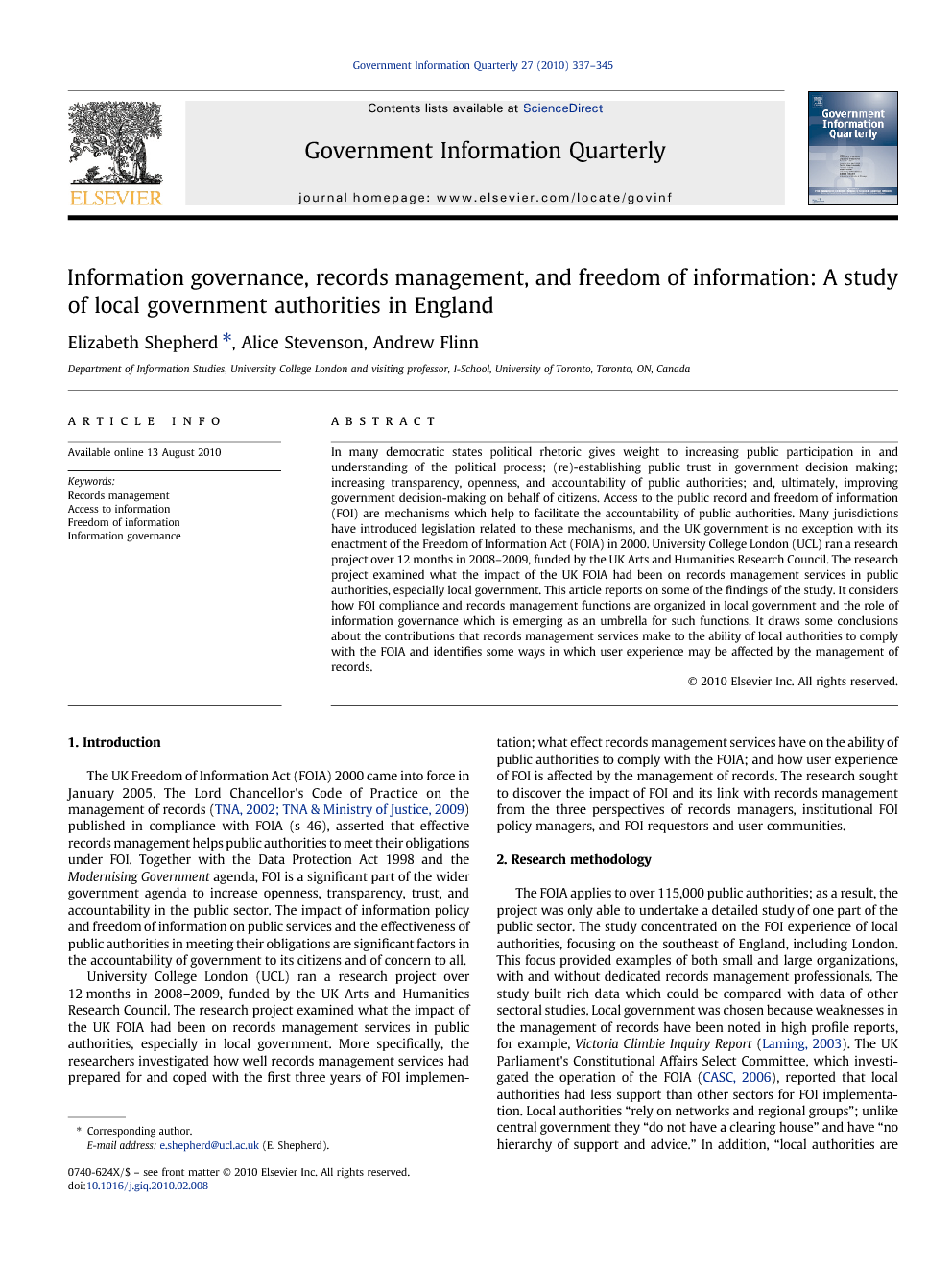 In many democratic states political rhetoric gives weight to increasing public participation in and understanding of the political process; (re)-establishing public trust in government decision making; increasing transparency, openness, and accountability of public authorities; and, ultimately, improving government decision-making on behalf of citizens. Access to the public record and freedom of information (FOI) are mechanisms which help to facilitate the accountability of public authorities. Many jurisdictions have introduced legislation related to these mechanisms, and the UK government is no exception with its enactment of the Freedom of Information Act (FOIA) in 2000. University College London (UCL) ran a research project over 12 months in 2008–2009, funded by the UK Arts and Humanities Research Council. The research project examined what the impact of the UK FOIA had been on records management services in public authorities, especially local government. This article reports on some of the findings of the study. It considers how FOI compliance and records management functions are organized in local government and the role of information governance which is emerging as an umbrella for such functions. It draws some conclusions about the contributions that records management services make to the ability of local authorities to comply with the FOIA and identifies some ways in which user experience may be affected by the management of records.

The UK Freedom of Information Act (FOIA) 2000 came into force in January 2005. The Lord Chancellor's Code of Practice on the management of records (TNA, 2002 and TNA & Ministry of Justice, 2009) published in compliance with FOIA (s 46), asserted that effective records management helps public authorities to meet their obligations under FOI. Together with the Data Protection Act 1998 and the Modernising Government agenda, FOI is a significant part of the wider government agenda to increase openness, transparency, trust, and accountability in the public sector. The impact of information policy and freedom of information on public services and the effectiveness of public authorities in meeting their obligations are significant factors in the accountability of government to its citizens and of concern to all. University College London (UCL) ran a research project over 12 months in 2008–2009, funded by the UK Arts and Humanities Research Council. The research project examined what the impact of the UK FOIA had been on records management services in public authorities, especially in local government. More specifically, the researchers investigated how well records management services had prepared for and coped with the first three years of FOI implementation; what effect records management services have on the ability of public authorities to comply with the FOIA; and how user experience of FOI is affected by the management of records. The research sought to discover the impact of FOI and its link with records management from the three perspectives of records managers, institutional FOI policy managers, and FOI requestors and user communities.