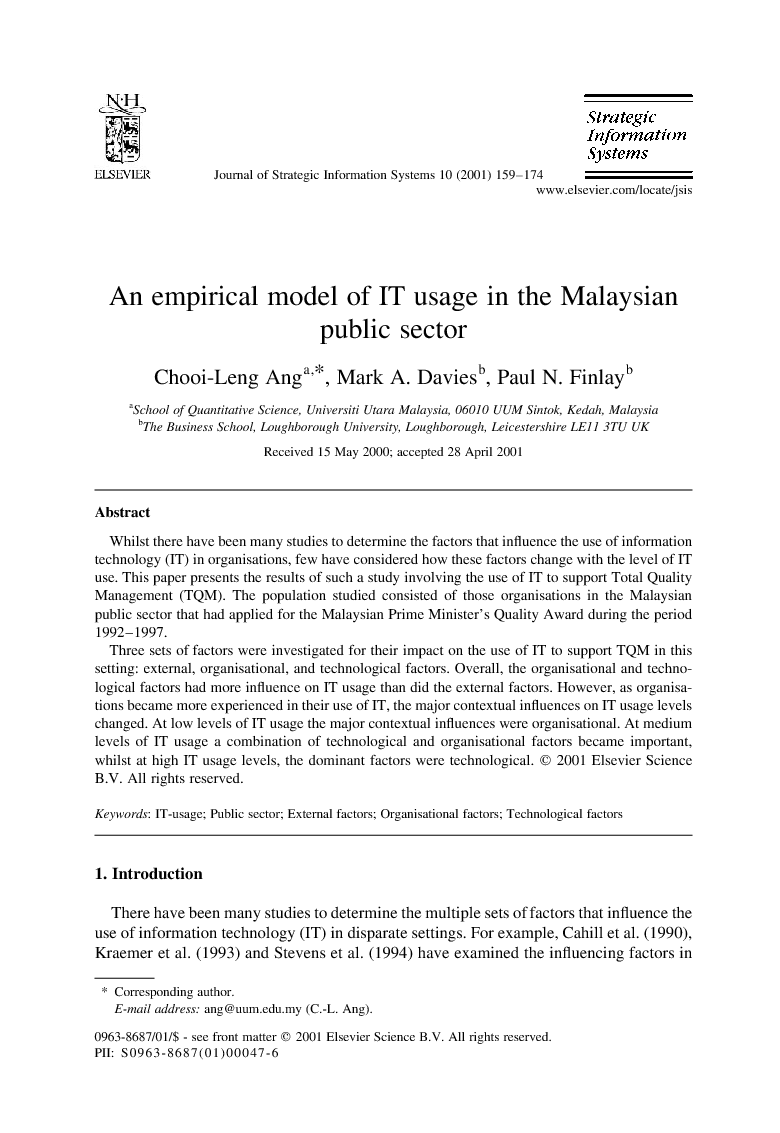 Whilst there have been many studies to determine the factors that influence the use of information technology (IT) in organisations, few have considered how these factors change with the level of IT use. This paper presents the results of such a study involving the use of IT to support Total Quality Management (TQM). The population studied consisted of those organisations in the Malaysian public sector that had applied for the Malaysian Prime Minister's Quality Award during the period 1992–1997. Three sets of factors were investigated for their impact on the use of IT to support TQM in this setting: external, organisational, and technological factors. Overall, the organisational and technological factors had more influence on IT usage than did the external factors. However, as organisations became more experienced in their use of IT, the major contextual influences on IT usage levels changed. At low levels of IT usage the major contextual influences were organisational. At medium levels of IT usage a combination of technological and organisational factors became important, whilst at high IT usage levels, the dominant factors were technological.

There have been many studies to determine the multiple sets of factors that influence the use of information technology (IT) in disparate settings. For example, Cahill et al., 1990, Kraemer et al., 1993 and Stevens et al., 1994 have examined the influencing factors in public sector organisations; Raymond, 1985, Yap et al., 1992 and Foong, 1999 have explored these in small and medium enterprises (SMEs); Bergeron et al., 1995, Hasan and Lampitsi, 1995 and Babcock et al., 1995 have investigated factors affecting the executive use of IT. Kasimin (1987) has presented a case study examining the role of information systems in regional development planning in Malaysia, the geographical area of direct interest to the study reported here, and Han and Walsham (1989) have applied their methodology to IT developments in Malaysia. This latter study also describes the development of the Malaysian national IT infrastructure in the period that preceded that in which the present study took place. Although a large number of factors that facilitate or inhibit the use of IT have been identified, the associated studies generally regarded their samples as homogeneous in terms of IT usage level. Since past studies (e.g. King and Teo, 1994 and Foong, 1999) have indicated that organisations with different IT usage levels have different perceptions toward facilitating and inhibiting factors, this study aims to determine those influencing factors, particularly in public sector organisations with different IT usage levels. The overall purpose of the study described in this paper is to determine if public sector organisations with different levels of IT usage have different factors that facilitate/inhibit their IT use. The Section 2 of this paper briefly discusses the research model, presenting the dependent and independent variables compiled from the respective Total Quality Management (TQM) and IT literatures. Section 3 covers the development of the questionnaire, the targeted respondents of the mail survey and the validation of the instrument. The research analysis and results are presented in Section 4 and finally, conclusions and recommendations are put forward in Section 5.

Regression analyses show that external, organisational and technological factors separately explain about 33, 42 and 58% of the variance in the IT usage. When the three are combined, the explanatory power increases to 63%. The results reveal that among the three predictor sets, the two internal factors, technological and organisational, have more influence on the IT-usage level than the external factors. Between the two internal factors, technological factors were found to influence the IT usage more strongly than organisational factors. This finding is consistent with the results of past studies (Kraemer et al., 1981, Laudon, 1985 and King and Teo, 1994). In addition, the present study also confirms the work of Cahill et al. (1990) that the combination of these three categories of factors offers greater explanatory power for the extensive use of IT than any one category of factors singly. However, when the respondents were grouped into three IT-usage levels, further analysis produced the following findings: 1. When the IT-usage level is low, organisational factors, particularly resource allocation, play an important role in enhancing the IT usage. Naturally, an organisation's low IT-usage level is mainly caused by insufficient resource allocation. Therefore, to increase IT usage, more resources should be allocated to develop IT applications. 2. For the moderate IT-usage organisations, both organisational and technological factors affect the usage level. Specifically, after attaining a moderate level, organisations that have strong top management support with a less centralised IT structure are likely to improve IT-usage level. However, only 26% of the variance in the IT usage is explained by the factors. 3. Technological factors are most influential on high IT-usage organisations rather than the other two categories of contextual factors. Slightly more than half of the variance is explained. For these organisations, integrated IT applications and distributed structures promote IT use.In presenting the findings and conclusions of this study, it should be noted that there are a number of limitations. The following recommendations may be helpful when undertaking similar further studies: 1. In estimating a model for the IT usage, fifteen independent variables were used initially in the multiple regression analyses. However, after removing all those that had an insignificant impact, four variables remained that explained 65% of the variance in the use of IT in TQM. Other predictors are needed to account for the 35% non-explained variance. Future study may consider staff IT training a likely variable as about a quarter of the respondents in the present study as well as Foong's (1999) study indicate that user's IT literacy has a significant association with the extent of IT use. Another potential predictor for the model is the business knowledge and awareness of IT personnel as highlighted by about 15% of the respondents and also in the study of Boynton et al. (1994). Another factor which may have an indirect but powerful relationship to IT use is the size of the ‘customers’ an organisation serves. As IT has been seen as a tool to ensure public accountability, it is likely that a demand for greater efficiency may lead to an increase in IT use. 2. Further to suggestion 1, in order to improve the explanatory power of the model, future study may expand the three contextual factors to include the fourth factor: user factors such as user characteristics and attitudes toward IT adoption. The present study has purposely excluded this category of factor because it was set to investigate IT use at the macro level besides being restricted by the size of the measuring instrument. However, past studies (e.g. Allingham and O'Connor, 1992, Foong, 1999 and Martisons and Chong, 1999) have shown that users significantly affect IT success. Further study is required to confirm if there are significant linkages.