عنوان انگلیسی
Earnings dynamics and uncertainty in Italy: how do they differ between the private and public sectors?
دانلود فوری مقاله + سفارش ترجمه 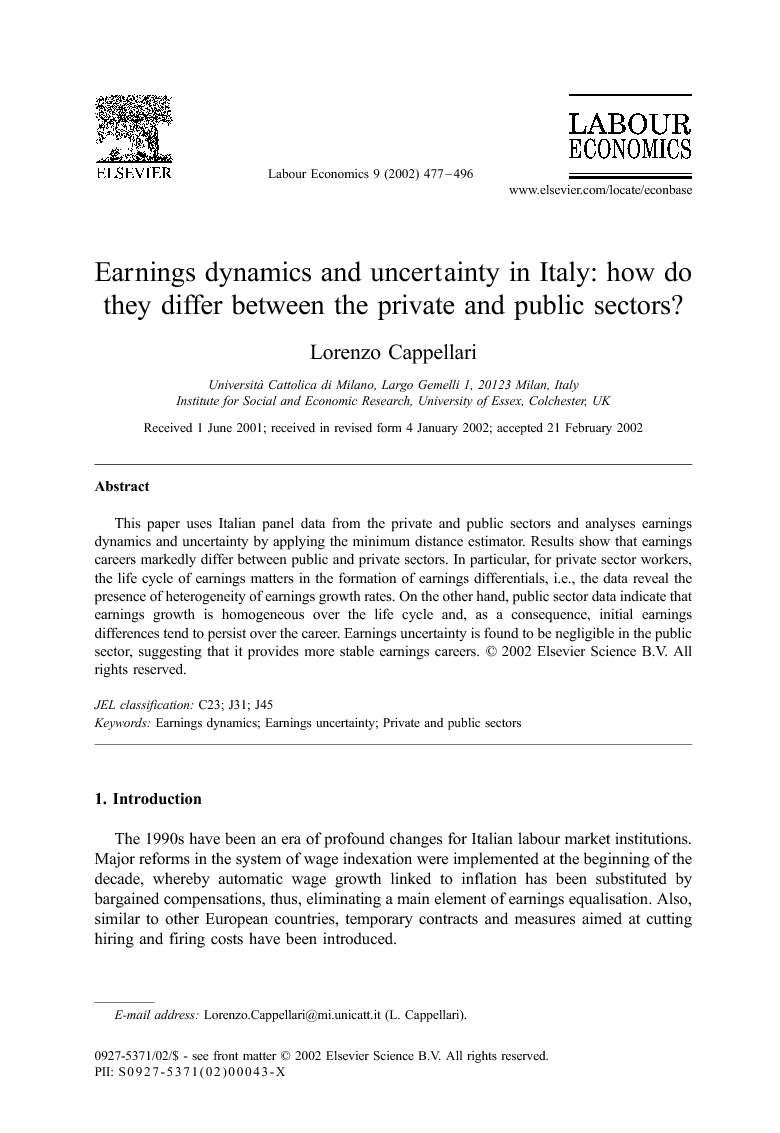 This paper uses Italian panel data from the private and public sectors and analyses earnings dynamics and uncertainty by applying the minimum distance estimator. Results show that earnings careers markedly differ between public and private sectors. In particular, for private sector workers, the life cycle of earnings matters in the formation of earnings differentials, i.e., the data reveal the presence of heterogeneity of earnings growth rates. On the other hand, public sector data indicate that earnings growth is homogeneous over the life cycle and, as a consequence, initial earnings differences tend to persist over the career. Earnings uncertainty is found to be negligible in the public sector, suggesting that it provides more stable earnings careers.

The 1990s have been an era of profound changes for Italian labour market institutions. Major reforms in the system of wage indexation were implemented at the beginning of the decade, whereby automatic wage growth linked to inflation has been substituted by bargained compensations, thus, eliminating a main element of earnings equalisation. Also, similar to other European countries, temporary contracts and measures aimed at cutting hiring and firing costs have been introduced. The reform of public sector employment is a relevant element of this process. Public sector jobs represent approximately 30% of the employed labour force and have traditionally been characterised by lower exposure to market forces and more compressed pay differentials compared to the private sector. The so-called “privatisation” of the public sector was set out by law at the beginning of the 1990s with the aim of increasing the efficiency of public sector employment and reestablishing economic incentives for public sector employees, for example, by introducing performance-related pay schemes and output monitoring, first of all at the management level. Despite the relevance of the reform for the functioning of the Italian labour market, little is known on the features of public sector earnings dynamics and their differences with the private sector beyond conventional wisdom.1 The objective of this paper is to contribute to filling in the gap. I use panel data on individual earnings for comparable cohorts of male workers in the two sectors to analyse the earnings covariance structure by applying the minimum distance estimator of Chamberlain (1984). I consider two main aspects of earnings careers. First, I estimate a measure of earnings growth heterogeneity, quantifying to what extent the two sectors differ in the ability to differentiate remuneration of time-varying aspects of productivity. Second, I estimate the dispersion of permanent earnings as opposed to that of transitory earnings, the latter providing a measure of earnings uncertainty due to economic shocks. The literature on earnings comparisons between private and public sectors has typically focussed on estimating measures of the pay differential between the two sectors. In particular, much effort has been devoted to the control of endogenous selection of workers in the two sectors (see, e.g., Pedersen et al., 1990, Brunello and Dustmann, 1997 and Bardasi, 2000, for Italy). Typically, this kind of approach is based on cross-sectional data, thus, enabling researchers to assess static differences in earnings between the two sectors, but leaving the features of earnings careers unexplored. This paper takes a complementary route and provides an empirical characterisation of earnings dynamics in the two sectors. I find that earnings careers markedly differ between public and private sectors. For private sector workers, the life cycle of earnings matters in the formation of earnings differentials, i.e., the data indicate the presence of heterogeneity of earnings growth rates. On the other hand, public sector data indicate that life-cycle earnings growth is homogeneous across individuals and, as a consequence, earnings differences at the beginning of the career tend to persist over the career. When looking at differences in earnings volatility, I find shock persistence to be larger in the private sector, i.e., unexpected deviations from the long-run component have longer duration, implying higher uncertainty. On the whole, the comparison of earnings volatility indicates that the public sector provides more stable earnings careers. The rest of the paper is as follows. In Section 2, the administrative panel data used in the analysis are described, while Section 3 provides a preliminary exploration of earnings autocovariances and (im)mobility rates. Section 4 reports the minimum distance analysis of the earnings covariance structure: formal models of earnings dynamics are set out and the results discussed. Section 5 contains some concluding remarks.

This paper has used administrative panel data on private and public sector employees to characterise earnings dynamics and uncertainty in Italy. At the descriptive level, it has been shown that in the public sector the earnings distribution is characterised not only by lower dispersion, but also by lower chances of moving through the earnings hierarchy through time compared to the private sector. The econometric analysis has used minimum distance techniques to characterise the features of earnings profiles and the degree of earnings uncertainty in the two sectors. The overall picture emerging from the analysis highlights remarkable differences in earnings careers between the two sectors. Earnings growth in the private sector is, to some extent, individual specific and plays a role in determining life-time earnings dispersion. At the same time, random deviations from the long-run earnings profile are characterised by substantial persistence, which makes the variance of shocks relevant in explaining overall earnings dispersion and generates uncertainty. Conversely, earnings careers in the public sector are more homogeneous—so that initial differences are more persistent through time—and less uncertain, most of overall dispersion being imputable to the long-run earnings component rather than to random shocks. While the latter finding indicates that public sector workers enjoy more stable earnings paths compared to their private sector counterparts, the former suggests that they also face lower opportunities to improve their position in the earnings ladder over time. To the extent that earnings growth heterogeneity remunerates differentials in learning ability and favours effort extraction over time, these results suggest that a possible source of inefficiency of public sector employment—in turn one of the main concerns inspiring recent reforms—could have been the lack of incentives provided through earnings careers.