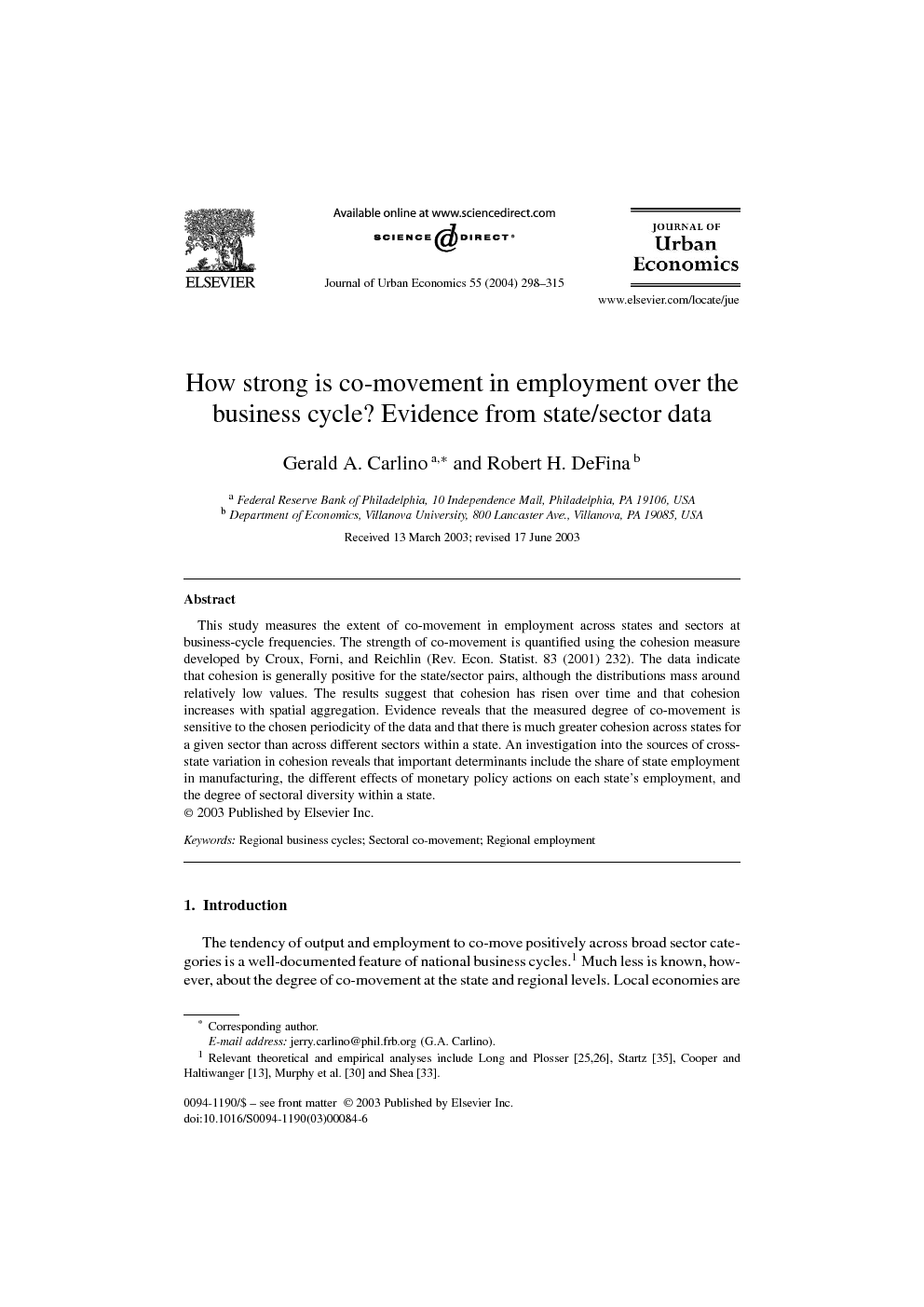 This study measures the extent of co-movement in employment across states and sectors at business-cycle frequencies. The strength of co-movement is quantified using the cohesion measure developed by Croux, Forni, and Reichlin (Rev. Econ. Statist. 83 (2001) 232). The data indicate that cohesion is generally positive for the state/sector pairs, although the distributions mass around relatively low values. The results suggest that cohesion has risen over time and that cohesion increases with spatial aggregation. Evidence reveals that the measured degree of co-movement is sensitive to the chosen periodicity of the data and that there is much greater cohesion across states for a given sector than across different sectors within a state. An investigation into the sources of cross-state variation in cohesion reveals that important determinants include the share of state employment in manufacturing, the different effects of monetary policy actions on each state's employment, and the degree of sectoral diversity within a state.

The tendency of output and employment to co-move positively across broad sector categories is a well-documented feature of national business cycles.1 Much less is known, however,about the degree of co-movement at the state and regional levels. Local economies areclearly influenced by aggregate and sector-specific shocks. Moreover, propagation mechanismsthat transmit shocks across sectors at the national level also operate at the subnational level.2 But influences specific to regions and to particular sectors within regionscan intervene to alter cyclical behavior, such as the extent of co-movement, relative to thatobserved for sectors at the national level. Indeed, the notions of a “rolling recovery” andof a “bicoastal recession” used in journalistic discussions suggest an awareness that themagnitude and timing of fluctuations in business activity vary across regions.In this study, we quantify the degree of co-movement in quarterly one-digit sectoralemployment within and across states and regions. The analysis spans the years 1942 to1995, a period that includes ten national business cycles as defined by the National Bureauof Economic Research (NBER). The measurements are important for several reasons. First,they represent basic stylized facts needed for regional business-cycle analysis. Indeed, theyhelp to understand whether local economies experience what are commonly thought of asbusiness cycles. While previous studies have explored the sources of shocks to regionaleconomies and the presence of regional spillovers, they have offered little evidence on thestrength and direction of sector co-movement that results.3 Second, the estimates allowa comparison with the degree of co-movement at the national level and so give insightinto the importance of national versus region-specific shocks in local business activity.Third, they provide data for an investigation into the reasons for regional differences inco-movement.Two things are needed to study sector co-movement: a measure of the business-cyclecomponent of the data and a definition of co-movement. The business-cycle componentsof the employment data are extracted using a band-pass filter to remove frequenciesshorter than six quarters and longer than 32 quarters, a standard approach in the literaturedescribing business cycles (see, e.g., Burns and Mitchell [5], McCarthy and Steindel [28],Baxter and King [2] and Christiano and Fitzgerald [10]). The measure of co-movementused in this study consists of the dynamic correlation between the band-passed series,as described in Croux, Forni and Reichlin [17] (hereafter CFR [17]). CFR [17] referto this measure as cohesion and argue that it is better suited to gauging the degree ofco-movement than are other commonly used techniques such as squared coherence, cointegration,common features, and common cycles.The study reports six main findings. First, the distribution of bivariate cohesions for allstate/sector pairs is widely dispersed but generally positive, confirming the idea of crosssectorco-movement of employment. However, the distribution masses around a relativelylow value, suggesting considerable idiosyncratic variation in state sectoral employmentcycles. Second, state/sector cohesion has risen over time. Possible reasons include technicalinnovations in communication and transportation technologies that have helped totransmit shocks across states and sectors to a greater extent than previously. Third, cohesionincreases with spatial aggregation. That is, cohesion of sector cycles at the nationallevel is substantially greater than at the state level. Fourth, the degree of sector comovementis sensitive to the chosen periodicity of the data. Cohesion indexes computedusing business-cycle frequencies of employment are substantially larger than those basedon log first-differences of employment. They also have a completely different pattern ofrelative magnitudes across states. Thus, log first-differenced data, which are typically usedin regional business-cycle analysis, can be ill-suited to capturing business-cycle dynamicsfor local economies. Fifth, cohesion is much greater among state/sector pairings than across different sectors within a state. For example, the degree of co-movement between manufacturing employments in different states is substantially greater than between manufacturingemployment and employment in other sectors within a state. Finally, we explore some possible reasons for differences in cross-state variation in sectoral cohesion.We find that cross-state variation in sector cohesion reflects differences in the share of employment in manufacturing, the different state effects of monetary policy actions, and the varying extent of sectoral concentration.

In this paper we measure the degree of business-cycle co-movement in quarterly sector employment at the state and regional levels. The analysis covers the years 1942 to 1995.We find that the distribution of bivariate cohesions for all state/sector pairs is widely dispersed but generally positive. However, the distribution masses around a relatively low value, between 0.2 and 0.3, suggesting a great deal of idiosyncratic variation in sectoral cycles. There is, however, much greater cohesion across states for a given sector than across differentsectors within a state. Evidence is presented that the measured degree of co-movementis sensitive to the chosen periodicity of the data, with log first differences noticeably understatingthe degree of business-cycle co-movement. Interestingly, the cohesion of sectorcycles at the national level is substantially greater than that within states. This finding suggests that the impact of idiosyncratic shocks to sectors within a state is diminished as these shocks tend to offset each other as the level of spatial aggregation increases.An investigation into the sources of cross-state variation in cohesion reveals thatimportant determinants include the state share of manufacturing employment, the differenteffects of monetary policy actions on each state’s employment, and the degree of sectoraldiversity within a state.