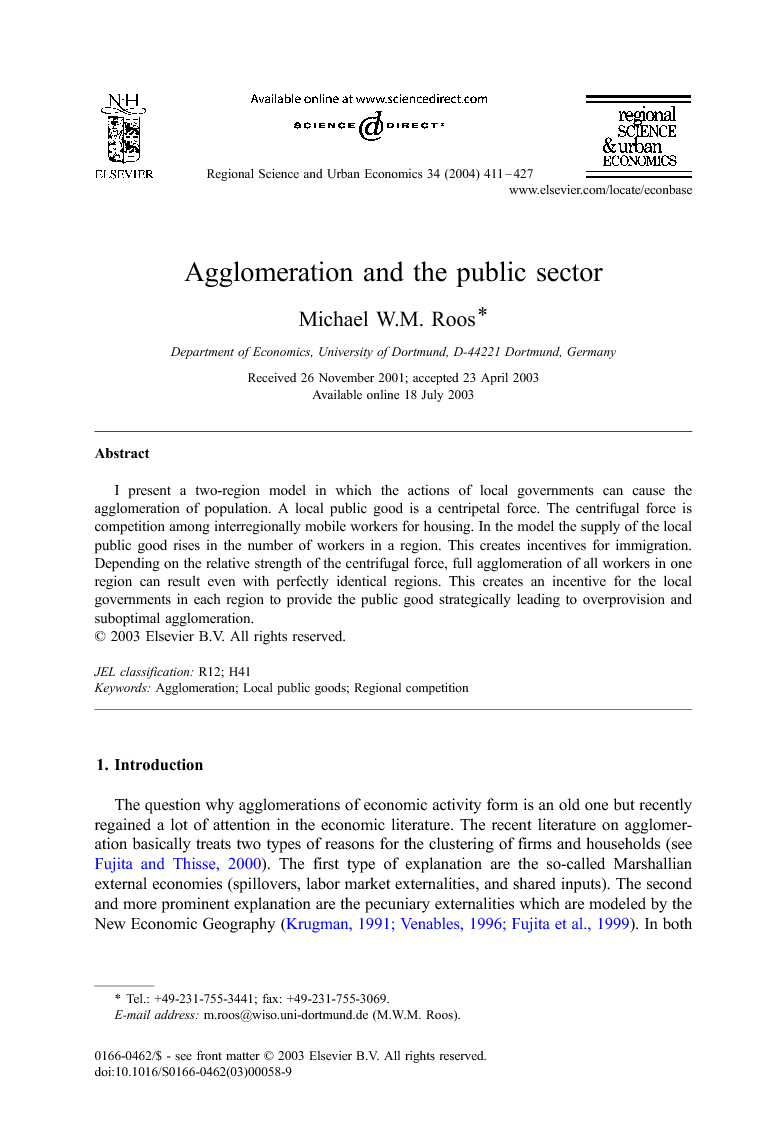 I present a two-region model in which the actions of local governments can cause the agglomeration of population. A local public good is a centripetal force. The centrifugal force is competition among interregionally mobile workers for housing. In the model the supply of the local public good rises in the number of workers in a region. This creates incentives for immigration. Depending on the relative strength of the centrifugal force, full agglomeration of all workers in one region can result even with perfectly identical regions. This creates an incentive for the local governments in each region to provide the public good strategically leading to overprovision and suboptimal agglomeration.

I have demonstrated that the provision of a public good, which is financed by a tax on an immobile local factor only, can induce households to immigrate. If this results in a higher income of the immobile factor, the supply of the public good can be larger triggering further immigration. A fiscal externality works as a centripetal force which can cause agglomeration. Local governments, which maximize the utility of residents receiving income from housing, have an incentive to provide the public good strategically. Regional competition for mobile population thus causes overprovision of the public good. With regional productivity differences, the regions strategic behavior distorts the interregional labor allocation so that too few workers live in the more productive region. These inefficiencies can serve as arguments against the decentralized provision of local public goods. If the regional supply of the public good were determined centrally, the negative externalities would be internalized. Two comments with respect to the public finance literature are worth making. It is a well established result of the tax competition literature that non-cooperative behavior of governments generally causes underprovision of public goods and suboptimally low tax rates (Zodrow and Mieszkowski, 1986, Fujita et al., 1999 and Wellisch, 200011. Contrary to this literature, there are no taxes on the mobile factor in my model. Therefore, my result is difficult to compare with the results of the tax competition literature. A second difference to results from public finance is that a tax on immobile property is not neutral with respect to migration in my model12. In the Tiebout literature, a tax on land rents usually does not affect the residential decision of mobile households because land is supplied inelastically in these models (see Wildasin, 1987, p. 1142, 1153, 1156). Since in my model all individuals—i.e. the houseowners, too—demand both the consumption good and housing and only houseowners are taxed, the supply of housing is not fixed. But even if it were inelastic, the tax would influence the migration decision because the mobile individuals benefit from the public good without having to bear a tax burden. This difference is important because immigration due to higher taxation of immobile property is the model's central mechanism. Although my model works like a New Economic Geography model, it does not rely on increasing returns to scale in production or technological externalities. There is, of course, an externality which is due to a pure public good. The agglomeration forces completely arises from a pecuniary or fiscal externality. This contrasts sharply with the existing theories explaining agglomeration. Looking for causes of agglomeration, one is not restricted to Marshallian externalities or market size effects as in Krugman's New Economic Geography. In addition, governments can influence the location decision not only of firms but of households as well. The agglomeration of population is thus not necessarily a consequence of the agglomeration of firms but can have its own causes. The aim of this paper is to broaden the narrow view of the agglomeration literature and to introduce the public sector into the analysis of agglomerations. This seems necessary for theoretical and empirical reasons. A possible extension of this simple model could be to endogenize the productivity differences. It would be interesting to analyze the interactions between the agglomeration forces caused by the public sector and the ones caused by the private agents. This might produce a new perspective on regional competition.