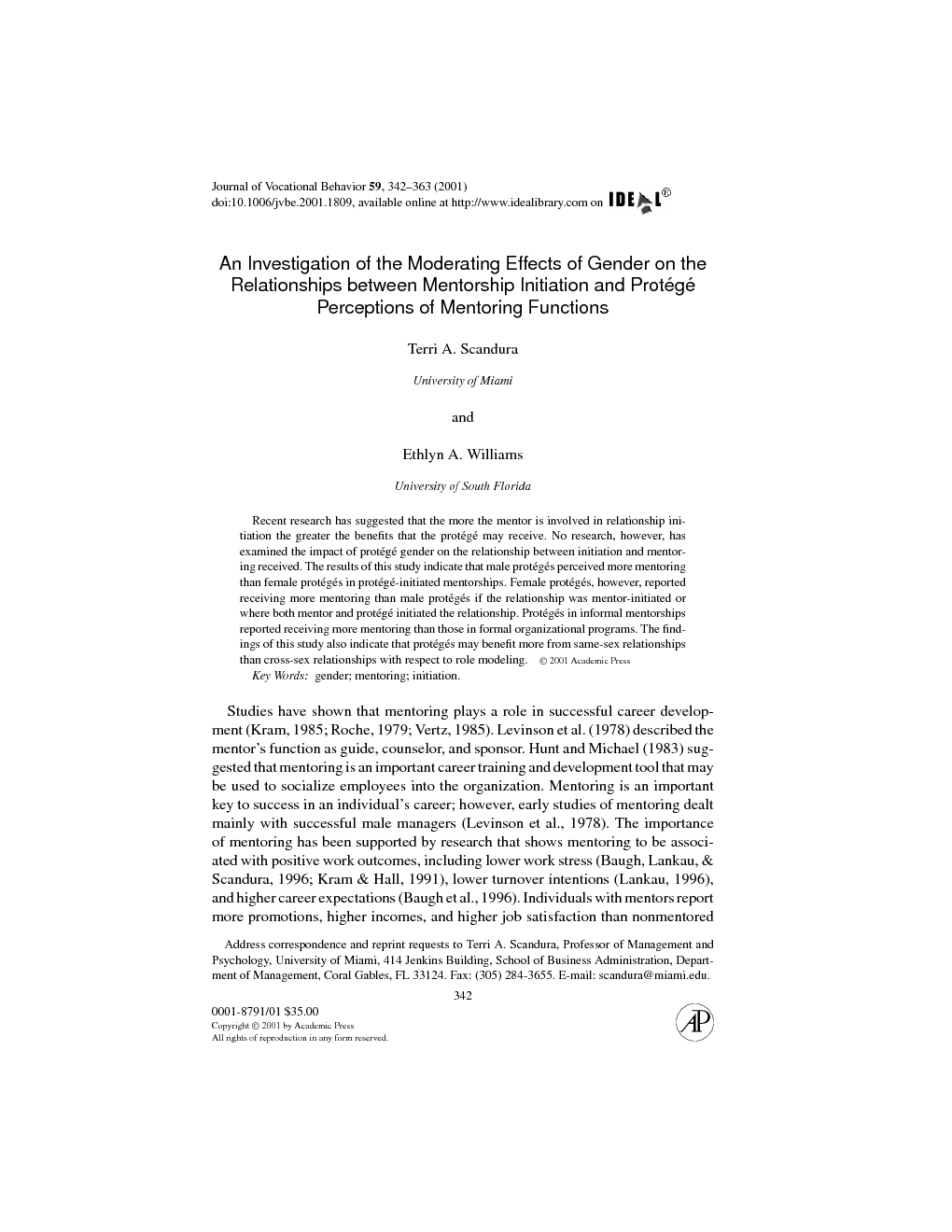 Studies have shown that mentoring plays a role in successful career development (Kram, 1985; Roche, 1979;Vertz, 1985). Levinson et al. (1978) described the mentor’s function as guide, counselor, and sponsor. Hunt and Michael (1983) suggested that mentoring is an important career training and development tool that may be used to socialize employees into the organization. Mentoring is an important key to success in an individual’s career; however, early studies of mentoring dealt mainly with successful male managers (Levinson et al., 1978). The importance of mentoring has been supported by research that shows mentoring to be associated with positive work outcomes, including lower work stress (Baugh, Lankau, & Scandura, 1996; Kram & Hall, 1991), lower turnover intentions (Lankau, 1996), and higher career expectations (Baugh et al., 1996). Individuals with mentors report more promotions, higher incomes, and higher job satisfaction than nonmentored individuals (Dreher & Ash, 1990). Support and encouragement of the prot´eg´e, training and development opportunities, providing challenging assignments, and sponsorship all occur in a mentoring relationship and thus foster career development. Riley and Wrench (1985) also noted that women reported higher job success and satisfaction when they had a mentor and that they expressed a greater need for mentoring than men. Thus, the literature suggests that gender is a potentially important determinant of the quality and nature of mentoring relationships (Noe, 1988; Ragins, 1989, 1997).Gender may affect the development and outcomes of mentoring relationships (Ragins, 1989, 1997). Clawson and Kram (1984) theorized that cross-sex mentorships might be more difficult to initiate than same-sex ones; however, while some studies report gender differences in the receipt of mentoring (George & Kummerow, 1981), still others do not (Dreher & Ash, 1990; Fagenson, 1989; Hill, Bahiniuk, & Dobos, 1989; Scandura & Ragins, 1993). Mentoring functions provided by mentors may differ based on diversity issues, and prior research on mentoring indicates that cross-sex and cross-race effects influence the benefits to be received from mentoring relationships (Ohlott, Ruderman,&McCauley, 1994). Chao (1997) suggests that to understand the impact of mentoring relationships it may be necessary to understand how they change over time. The initiation phase may be a crucial element in relationship development. Recent research suggests that the greater the role the mentor plays in relationship initiation the greater the benefits from mentoring will be (Scandura & Williams, 1998). However, no research examines howthe relationship between the party responsible for initiation and mentoring functions received might be affected by the prot´eg´e’s gender.The purpose of this article is to investigate the role that gender may play in the relationship between prot´eg´e perceptions of who initiates the mentorship (the first phase of mentorship) and their perceptions of the mentoring received after initiation. The literature comparing different phases of the mentoring relationship is sparse. We therefore explore prot´eg´e reports on different types of mentorship initiation: initiated through a formal organizational program and informally initiated. For informally initiated mentorship, there are three types of initiation: (1) prot´eg´einitiated, (2) mentor-initiated, and (3) both mentor-and-prot´eg´e-initiated (mentor/ prot´eg´e-initiated). The extent to which prot´eg´e sex impacts the relationships of these types of initiation (comparisons of prot´eg´e-initiated vs mentor-initiated, prot´eg´e-initiated vs mentor/prot´eg´e-initiated, mentor-initiated vs mentor/prot´eg´einitiated, and formal organizational program vs informally initiated) with reported mentoring functions are tested. We also examine the extent to which prot´eg´e sex impacts the relationship between mentor’s sex and mentoring functions received