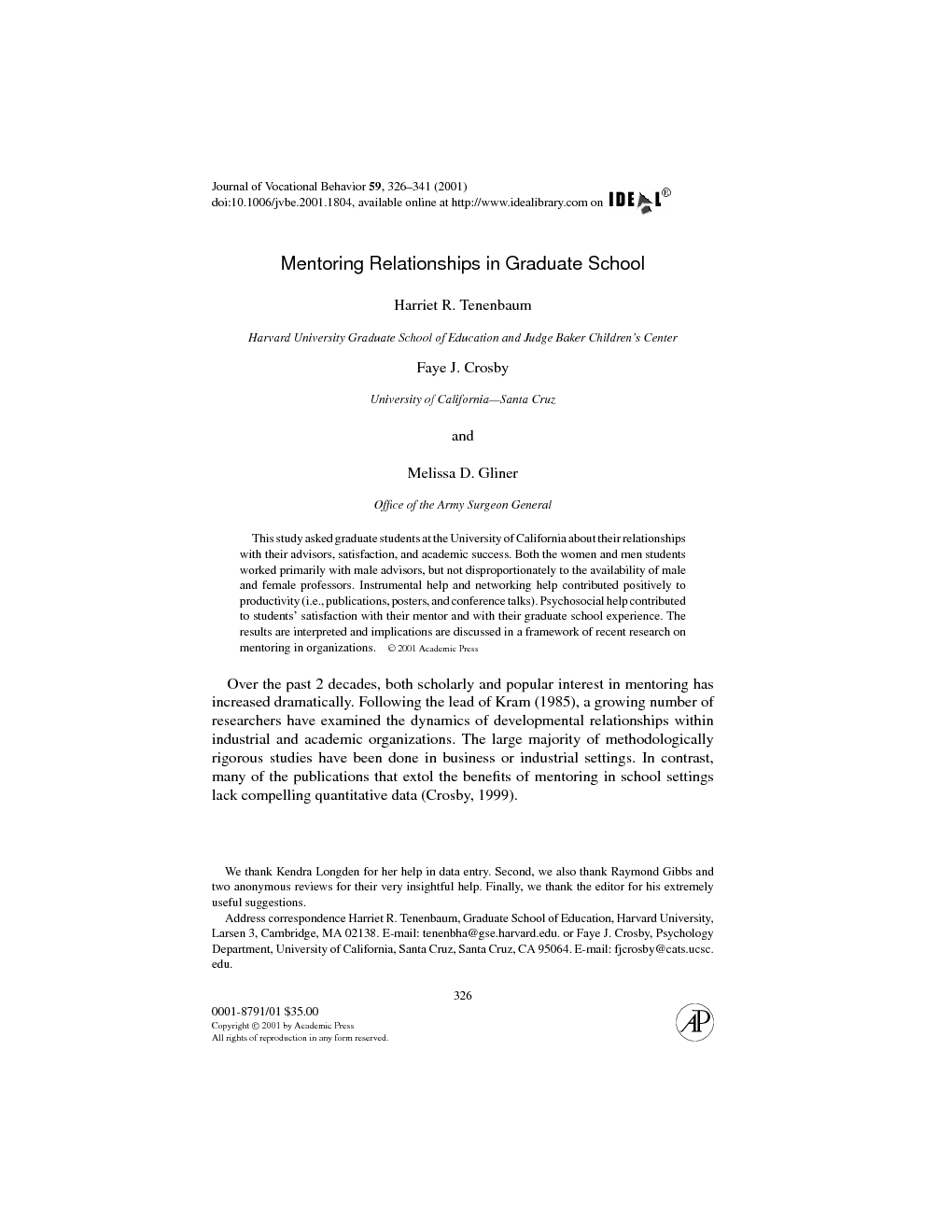 This study asked graduate students at the University of California about their relationships with their advisors, satisfaction, and academic success. Both the women and men students worked primarily with male advisors, but not disproportionately to the availability of male and female professors. Instrumental help and networking help contributed positively to productivity (i.e., publications, posters, and conference talks). Psychosocial help contributed to students' satisfaction with their mentor and with their graduate school experience. The results are interpreted and implications are discussed in a framework of recent research on mentoring in organizations.

Over the past 2 decades, both scholarly and popular interest in mentoring has increased dramatically. Following the lead of Kram (1985), a growing number of researchers have examined the dynamics of developmental relationships within industrial and academic organizations. The large majority of methodologically rigorous studies have been done in business or industrial settings. In contrast, many of the publications that extol the benefits of mentoring in school settings lack compelling quantitative data (Crosby, 1999).

Like other researchers, we found an empirical distinction between help that is practical and help that is socioemotional. Factor analysis of the mentoring scale we had adapted from Dreher and Ash (1990) produced three factors, which we labeled networking help, instrumental help, and psychosocial help. Previous studies had found two, not three factors. Because we modified Dreher and Ash’s scale, deleting two of the original items and creating four additional ones, we cannot be certain that the new factor structure is not simply a result of methodological changes. It does seem probable, however, that specific contours of help may vary as a function of context. Perhaps it is possible for an advisor to give graduate students different types of practical help. In a business context, meeting “the right people” and being assigned to work on “the plum jobs” may not be as distinct as they are in graduate school. Meanwhile, for younger students, psychosocial help may include distinct components, while instrumental help may again not be analyzable into component units. Our findings suggest that it would be worthwhile to look at the structure of mentoring in a variety of different settings.As expected, we found that practical help influenced students’ productivity. Because the achievements of academic personnel are often evaluated in terms of publications and especially in terms of sole-authored publications, we distinguished between products with and without the academic advisor. We found that level of instrumental help statistically predicted the student’s products with the advisor. These findings demonstrate that it is not only in a business setting that practical help from a senior person can help the junior person accomplish tangible career successes. Also as expected, receipt of psychosocial help increased satisfaction. The more psychosocial help received, the more satisfaction students expressed with their advisors and with their graduate experience. Our findings were in line with previous research conducted in the setting of health care professionals (Koberg, Boss, & Goodman, 1998). Satisfaction with advisor and satisfaction with the working relationship with the advisor had similar results. The bivariate correlation between the two was high (r D :68). Satisfaction with the relationship and with their advisors both decrease the longer that students are enrolled in graduate school. The more socioemotional help an advisor provides, the more satisfied the student is with both the advisor and their working relationship.The regression analyses indicated that students differentiate between the advisor and their relationships with their advisors; that is, more instrumental help increases the students’ satisfaction with the student– adviser relationship, but not with the advisor. Gender proved to be relatively unimportant in our study, as it has in so many studies in business (O’Neill et al., 1999). Women and men students were similar in most regards. The one noticeable difference concerned rate of publications. Men students published more with their advisors than did women students across the disciplines. Meanwhile, gender of the advisor was not very important. Men advisors gave less psychosocial help than women advisors, but were as likely as women to give practical help to their students. Women and men advisors were selected by students in proportion to their prevalence as faculty. By extending to academic training the type of rigorous quantitative inquiry that has been prevalent in business settings, our study makes a contribution to the literature on mentoring. To carry the work further, one can envision a number of additional studies. At a minimum, it would be useful to repeat the survey at another graduate school to replicate the three factors of instrumental help, networking help, and psychosocial help replicate. More ambitiously, it would be very informative to conduct a longitudinal study, with data collected at the start of graduate school and at 1-year intervals thereafter. Increased sample sizes would also allow us to look at the impact of various types of mentoring help on students from ethnic minority groups in the sciences, humanities, and social sciences. Most ambitious of allwould be a true experiment or a quasiexperiment in which students and advisors would be randomly assigned to conditions in which either socioemotional or practical help would be emphasized. Only with random assignment can we be sure that the observed effects are not due to self-selection. Our study and existing studies probably provide enough data to warrant formulating the following advice to advisors: think about the type of outcome you desire and then match your help to produce the desired outcome. Socioemotional mentoring increases student satisfaction, whereas instrumental help increases student productivity.