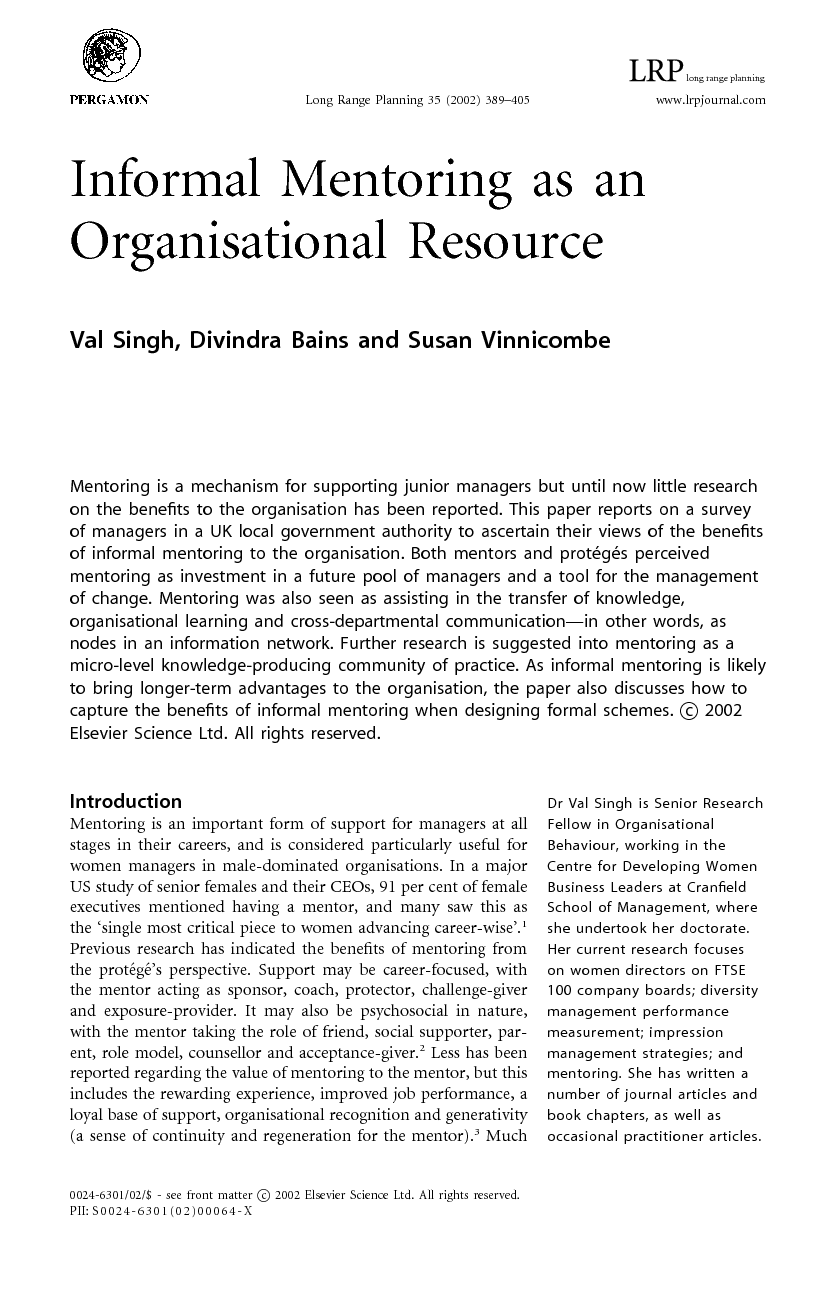 Mentoring is an important form of support for managers at all stages in their careers, and is considered particularly useful for women managers in male-dominated organisations. In a major US study of senior females and their CEOs, 91 per cent of female executives mentioned having a mentor, and many saw this as the ‘single most critical piece to women advancing career-wise’.1 Previous research has indicated the benefits of mentoring from the protégé’s perspective. Support may be career-focused, with the mentor acting as sponsor, coach, protector, challenge-giver and exposure-provider. It may also be psychosocial in nature, with the mentor taking the role of friend, social supporter, parent, role model, counsellor and acceptance-giver.2 Less has been reported regarding the value of mentoring to the mentor, but this includes the rewarding experience, improved job performance, a loyal base of support, organisational recognition and generativity (a sense of continuity and regeneration for the mentor).3 Much of the previous research into mentoring is US-based, although some researchers have been active in the UK, particularly in the area of best practice in mentoring for top-level positions.4 While many articles have hinted at the benefits of mentoring to the organisation, these have seldom been discussed in detail, although they are said to accrue to the organisation indirectly through the support given to promising young individuals who have been identified by more senior managers. A notable exception is Wilson and Elman, although no empirical results are reported, and no measure of the organisational benefits has been found in the literature.5 The purpose of this paper is to provide empirical evidence of the perceived benefits of mentoring to the organisation itself. The aim of this study was to examine whether the views of managers would be in agreement with the benefits of informal mentoring suggested by the literature. We undertook a case study of Cambridgeshire County Council, a UK public sector organisation which was considering whether to introduce an assisted informal or more formal mentoring scheme. This followed a decade when the presence of mentoring relationships was not monitored at all. This paper focuses on the organisational benefits of informal mentoring. We review the literature on organisational benefits, although it is scant. We then report the findings from our survey of male and female managers’ perceptions of the benefits of informal mentoring to the organisation. Of particular interest is the view of mentoring as an organisational mechanism for the production and capture of tacit knowledge.6 Finally, we review implications for further research, and for managerial practice.

This paper has contributed to the literature on informal mentoring by building on Wilson and Elman’s and Conway’s work, constructing a scale derived from the literature covering a range of benefits to the organisation. We also have provided evidence of mentoring benefits perceived by a UK sample, whereas most previous research in this area has been undertaken in the US. However, despite an initial sample of 642 managers, and a response rate of 35 per cent, there were few informal mentors and protégés in the sample. We have identified three clear factors from the results: namely HRM benefits, Culture and Change benefits and Communication benefits, as expected from the literature review. We acknowledge that this study has limitations due to the small number of responses from those with experience of mentoring relationships in the organisation selected, which were too few for a valid factor analysis of the new scale to be undertaken. There is additional self-selection bias in that those who completed our mentoring benefits questionnaire were in mentoring relationships and would have been more likely to view mentoring as beneficial. There may also be public/private sector differences in the perceived benefits of mentoring. We suggest further research should follow with a larger sample. Such information would be invaluable for organisations when considering investment in mentoring. Questions should be added to the scale to cover organisational learning and the transfer of skills and knowledge, given the emphasis on this from the non-mentoring respondents in this sample. The links with commitment and motivation for these variables could also be usefully explored. The tacit knowledge contributed by mentors to both protégé and organisation seems a promising area for further research, following on from von Krogh. Further research using a qualitative design for interviews with mentor/protégé dyads is also suggested, to explore in more depth the benefits which they perceive to accrue to the organisation, to understand how these arise, and how they may be best exploited to the advantage of all involved. We obtained qualitative comments about reasons for supporting the introduction of assisted informal mentoring from the remainder of respondents. Results showed that their expectations of benefits were very similar to the ratings given by those in mentoring relationships. We did not find strong evidence of gender differences in responses. Female and male mentors shared views on the benefits to the organisation, indicating common values and organisational knowledge. Male protégés appear to focus more on individual benefits, indicating their own hopes and ambitions, while female protégés put significantly higher value on the impact of mentoring on the organisational culture. We have suggested a number of implications for practice. Mentoring is generally seen as beneficial at the organisational level, particularly in terms of its succession planning and career development facets, by both mentors and protégés, as well as by those not yet in mentoring relationships. It is also seen as a tool for the management of organisational culture, both in terms of facilitating cultural change and maintaining continuity of values and culture. In addition, there are indications that the tacit knowledge embedded in the mentoring process can be utilised for organisational advantage. Mentors should be encouraged to reflect on the mentoring process together with their protégés, so that they can act as better and deeper sensors, and senior management should ensure that they capture this valuable and hidden resource. The issue for practitioners is how to design and implement formal mentoring schemes which do not stifle the developing relationships, and this paper has suggested some ways in which such schemes might be initiated.