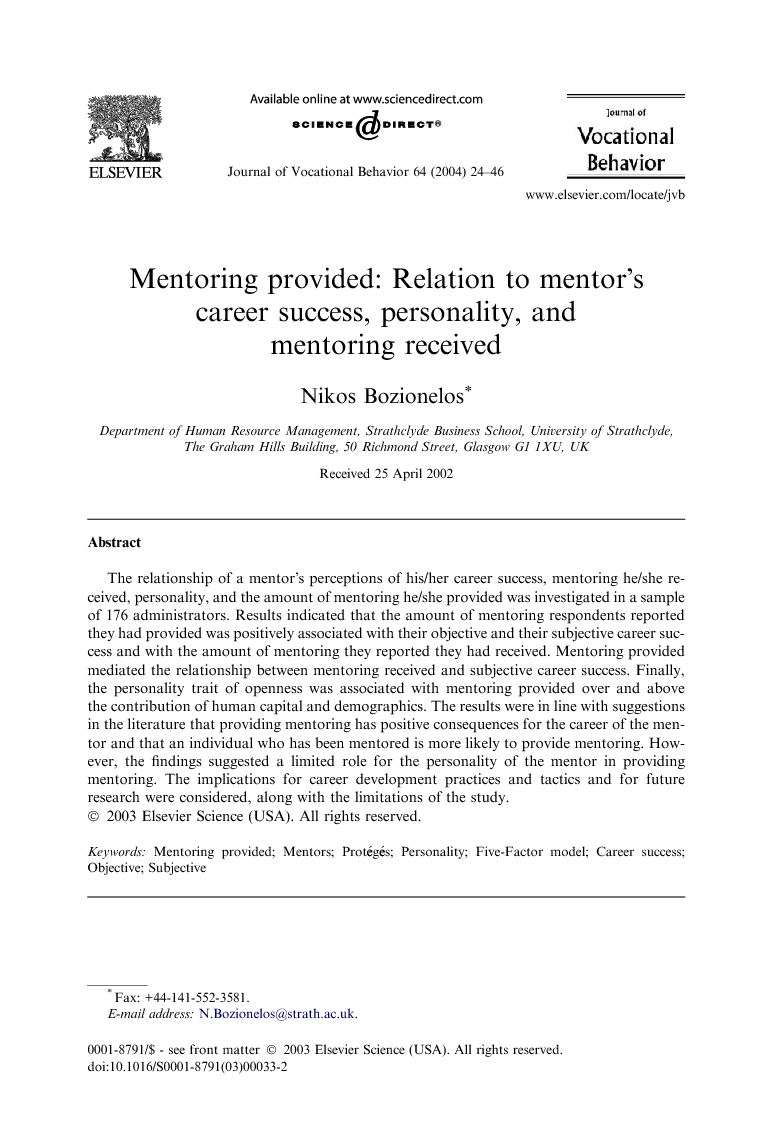 The relationship of a mentor’s perceptions of his/her career success, mentoring he/she received, personality, and the amount of mentoring he/she provided was investigated in a sample of 176 administrators. Results indicated that the amount of mentoring respondents reported they had provided was positively associated with their objective and their subjective career success and with the amount of mentoring they reported they had received. Mentoring provided mediated the relationship between mentoring received and subjective career success. Finally, the personality trait of openness was associated with mentoring provided over and above the contribution of human capital and demographics. The results were in line with suggestions in the literature that providing mentoring has positive consequences for the career of the mentor and that an individual who has been mentored is more likely to provide mentoring. However, the findings suggested a limited role for the personality of the mentor in providing mentoring. The implications for career development practices and tactics and for future research were considered, along with the limitations of the study.

Mentoring is defined as a developmental relationship that involves organizational members of unequal status or, less frequently, peers (Kram, 1985). The relationship may involve a variety of socio-emotional (e.g., friendship, counseling) and career development (e.g., role modeling, career guidance) functions that the mentor provides for the protégé (Kram, 1985; Noe, 1988; Scandura, 1992). Mentoring has been established as a human resource practice and as an individual strategy for career success (e.g., Atkinson, 2002; Knouse, 2001; O’Reilly, 2001). A respectable body of empirical systematic research has investigated its nature, antecedents, and consequences (e.g., for a short review see Russell & Adams, 1997). However, up-to-date empirical research has predominantly focused on antecedents and consequences of mentoring from the perspective of protégés (Higgins & Kram, 2001; Ragins, 1997). With few exceptions (Allen, Poteet, Russell, & Dobbins, 1997; Ragins & Cotton, 1993; Ragins & Scandura, 1999), there is a scarcity of systematic empirical investigations of mentoring from the perspective of mentors. The present work adopted the perspective of those who provide mentoring and investigated correlates of mentoring provided by mentors. The study focused exclusively on informal mentoring relationships (i.e., relationships that are initiated and evolve naturally and without organizational intervention) between organizational members of unequal status. This type of relationship is typically associated with the term “mentoring” (e.g., Eby, 1997; Higgins & Kram, 2001). However, mentoring exists in other forms, including formal mentoring, which refers to mentoring relationships arranged by the organization, lateral mentoring, which involves individuals of equal status, and external mentoring, which refers to developmental relationships between individuals who function within different organizational settings. These forms of mentoring, albeit important (e.g., see Allen, McManus, & Russell, 1999; Eby, 1997; Higgins & Kram, 2001), were excluded from the focus of the present work.